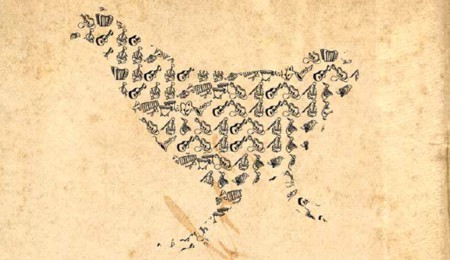 The first musical memory of many Bolivians is without a doubt Los Pollitos Dicen, a musicalised nursery rhyme about chicks chirping ‘pío pío’ when they are cold and hungry. In the lyrics, mother hen brings them maize and wheat and shields them from the cold. What more could they possibly want? The song has never gone out of fashion.
Los pollitos dicen: “pío, pío, pío”
cuando tienen hambre cuando tienen frío.
La gallina busca el maíz y el trigo
y les da la comida y les presta abrigo.

The next song on our tour is Pío Pío, composed by Javier Unsihuay and Farino Erazo in the mid-80’s. The onomatopoeia in the title curiously seems to reference the previous song, or at any rate it is unthinkable to imagine they are unrelated. But unlike Los Pollitos, the primary audience for Pío Pío are the lovesick, and often drunk, dancers in rural areas. This huaylas is generally accompanied by a vigorous zapateo. Well known across Andean communities, it is generally found on long-wave AM radio stations.

Our next stop is Azul Azul’s hit single Mamá no Quiero Comer más Huevo, the musical expression of a son’s lament at his mother’s insistence in only cooking him eggs. We have not been able to detect a figurative meaning to these lyrics: no double entendres, no innuendo; just the predicament of a man tired of eating eggs.

,mami no me gusta para nada…

The final song is Monterrojo’s hit from the late 90’s titled Paola. The genre, which the Uruguayan band describe as ‘tropical’ has elements of cumbia, pop, dance, merengue and bachata. Paola captures a man’s infatuation with an eponymous girl, to whom he asks for a chance (ultimately to get her drunk and take her to bed), assuring her that he will make a serious effort (or ‘poner huevo’, which alternatively means to lay an egg—an act which undoubtedly does require great effort, especially for a man).

MIR - Cancion de la Victoria
Hymn to the Movimiento de la Izquierda Revolucionaria party. Read the article on El Gallo to learn about the background and impact of the MIR in the 80’s and 90’s.

Miliki - La Gallina Turuleca
Popular children’s song about an egg-laying hen, both its lyrics and authorship have been a cause for controversy. Originally in portuguese, Galinha Magricela (meaning ‘skinny chicken’) never gained the wild popularity of its Spanish version. While there’s no doubt it was made famous by Gabi, Fofó and Miliki, it has been plagued by accusations that it is an exact copy of Gallina Papanatas by Monreal.