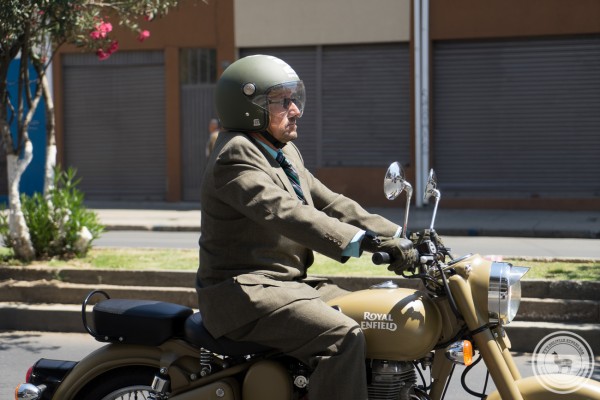 Like a sea captain with an expensive taste in motorbikes, Nicanor Calderón arrives, dressed not so much to impress as to command, dismounting a rumbling Harley Davidson. He’s wearing a white dress shirt, black bow tie, and a ponytail finished with a peaked Harley cap. The look is somewhere between a pirate, a biker, and someone at home in a smoking lounge.

The reason for his flamboyant entrance on a warm Sunday in Cochabamba is equally strange. Today marks ‘The Distinguished Gentleman’s Ride’ (DGR), an event in which classic motorbike enthusiasts meet for a ride in various cities around the world, dressed in their most dapper clothing. If you actually needed a reason to dress in a three-piece suit and climb aboard a Royal Enfield, the tweeness of this event masks a serious purpose. This motorized pageant ultimately aims to raise funds and awareness for men’s health, specifically prostate cancer and suicide prevention.

It seems strange that a niche biking event, created in Australia only five years ago, should reach across the Atlantic to a city right in the middle of Bolivia. Yet Nicanor is certainly not alone; within half an hour, he is surrounded by a coterie of well-dressed men and women. It is Nicanor and his friend Ramiro Estrugo who brought DGR to Bolivia last year, galvanizing fellow members of the Club de Motos Clásicas Cochabamba to meet and raise money. As Nicanor puts it, the event is ‘perfect for us’. Many of the members are over 60, and all of them share an expensive taste in classic bikes.

The group isn’t huge – roughly 22 people with 14 bikes eventually arrive – but these cochabambinos are from many areas of the motor biking community, particularly the increasingly numerous group Royal Enfield owners. In many ways, this is a model tale of how Internet connectivity can join disparate communities. Not only did Nicanor hear about the DGR online, but it is the availability of rare parts through virtual dealers that has driven the growth of niche motorbike groups in Cochabamba.

Although they are officially registered, the meetup is not completely orthodox as far as the DGR is concerned. The event guidelines are a strange mix of inclusive fundraising zeal and restrictive specifications on what bikes are allowed. The website mandates a list of rides like the ‘Tracker’, the ‘Chopper’, and the ‘Scrambler’, and even a ‘Mad Men’ inspired outfit. In places like London, where thousands of riders take part, it serves, in part, to keep numbers from getting dangerously big. In Bolivia, the turnout is smaller and the bikes far more varied. Many of the riders signed up only the night before, and the total amount raised is around US$215, in comparison to the almost US$3.5 million pledged worldwide. As Nicanor confesses, ‘Most of them are here just for the ride.’

If you actually needed a reason to dress in a three-piece suit and climb aboard a Royal Enfield, the tweeness of this event masks a serious purpose.

Nicanor, however, is not. He spoke passionately to the crowd about the significance of the ride and the necessary safety requirements. ‘The most important thing,’ he says, ‘is awareness of prostate cancer and knowing not to delay the situation,’ irrespective of how successful they are in other areas of the event. These are sentiments echoed by a number of riders, including Kevin Rivas, a man dressed so sharply in a matching three piece that you have to be careful not to cut yourself. Leaning over the hood of a Ducati SportClassic, his composure belied the severity of his words. ‘I’m so afraid of cancer,’ he admitted, ‘I’m terrified.’ Alexis Trigo, another rider, shared these concerns, noting that, ‘In Bolivia there’s not really prevention in health, men especially. This is about getting people to check up and not wait until they are sick.’

Nicanor’s aspirations certainly aren’t modest. He hoped to draw 50 to 100 riders in future years in order to send out a more effective message. Yet the niche, chrome, and well-dressed absurdity of the event seems to exist far more for it’s own sake than for a practical purpose. In part, it is a performance of manicured masculinity, one that aims to challenge the negative stereotypes that often surround male bikers. Ultimately, though, on this sunny Cochabamba morning, it simply feels like a chance for like-minded men and women to meet and put on a real good old-fashioned show.