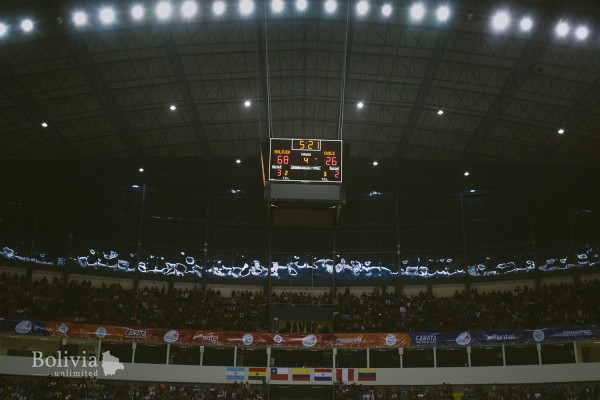 Apathy, passion and the challenge of hosting the Juegos Suramericanos

For the first time since their inception in 1978, the Juegos Suramericanos are being held in Bolivia. The sporting event was created by the ODESUR (South American Sports Organisation) in 1976, with the aim of uniting South American countries in competition, and spreading Olympic ideals across the continent. Similarly to the Olympic format, the games take place every four years in various South American cities. After La Paz was the host of the inaugural games, Cochabamba won the rights to host the 11th edition in May 2016. Following years of investment and preparation, the games began on the 26 May.

In January of 2018 – a few months before construction for the games was completed – the hosting of the competition was estimated to cost 1.5 billion bolivianos, distributed across the construction of infrastructure, the purchasing of equipment and the training of the Bolivian team. Much of the investment was made by the Bolivian Ministry of Sports, although non-governmental aid also helped finance the event.

In previous editions, such as in Argentina 2006, Colombia 2010 and Brazil 2002, the nation that hosts the games has been victorious in the competition. Expectations were high in Bolivia, following the monumental investment the country had made and the anticipation felt after the Olympic games in Rio 2016.

I was struck by the lack of excitement regarding the games around the city.

Upon first arrival in Cochabamba, I was struck by the lack of excitement regarding the games around the city. Sparse and lonely indications of the sports event created an eerie effect, whilst the floods of foreign fans I expected to see did not appear. This is partly due to the short history of the event, which is celebrating only its 11th edition, but also to the cultural approach to Olympic sports (barring football) in Bolivia.

'Franco, for sure,' said a couple at a racquetball match when I asked them which athlete they were most excited to see. Racquetball is Bolivia's best chance for gold in this year’s games, as South American heavyweights don’t invest heavily in the sport due to its lack of Olympic status. Bolivia’s Conrrado Moscoso won gold in the men's singles this year. Sebastian Franco, from Colombia, whom Bolivian fans were most excited to see, represented their biggest challenge. Whilst racquetball fans would understandably be excited to see the best in the business, the lack of a competitive attitude in Bolivian fans was surprising. I asked another fan in attendance with his wife and four children which Bolivian athletes he was aware of: ‘None that are any good!’ he said. ‘I enjoy watching the sports with my family, and my kids. The result doesn't really matter to me.’

Perhaps the root of the issue doesn't come from the attitudes of fans. Such apathy could be born from the uncompetitiveness of the athletes. During the male’s volleyball Bolivia vs Argentina match, a mixture of Bolivian fans, drums and flags almost resembled footballing 'ultras.' As it became more and more clear, however, that the game would end in a Bolivian defeat, the ferociousness of their support slowly waned.

In contrast, Bolivian fans attended the women's basketball in masses, in which Bolivia was facing Chile for silver. The crowd of eager fans surrounding the stadium, unable to get in due to such a high demand, almost matched the number of fans inside the stadium. The energy they emitted as they watched their team storm to a comfortable win and a silver medal, suggests that a passion for sports is present in Bolivia and that fans will engage in sports in which Bolivia can challenge its South American rivals.

Raquel Justiniano, a member of the winning Bolivian team, shared her thoughts on the games: ‘My experience in this competition has been very beautiful, we received a lot of support from Bolivian people, and it’s something very positive for Bolivia’s sports.’ She attributed part of the success of the women's basketball team to the investment made in the country for the games, which allowed Bolivian athletes to train with a higher quality equipment and facilities suitable for an international competition. ‘[The standard of facilities] has improved a lot, we can see that they have worked with professional equipment of very good quality, that respects international standards. I hope they keep it for future tournaments,’ she said. Most of the infrastructure constructed for the competition will continue to be used in the following years, and in this sense the Cochabamba games of 2018 could be a catalyst for a steady increase in the competitiveness of Bolivian athletes, and consequently fan engagement in sports.

However, doubts remain regarding the effectiveness and appropriation of the Bolivian government’s investment. One notable absence from the list of participating athletes this year is national judo champion Martín Michel. Michel who omitted himself from the games as a form of protest against the lack of government support for athletes following the Rio Olympics. ‘After the 2016 Olympic games in Rio,’ he says, ‘I came back with the hope of receiving much more support, but none ever came.’

Michel hopes to represent Bolivia again in the future and has set his sights on the 2020 Tokyo Olympic games. This is why it speaks volumes that he has refused the opportunity to win on home soil due to the disenchantment with the Bolivian sports bureaucracy. The issues shrouding the current state of Bolivian sports appear to be largely financial: ‘The government offered $50 to cover my needs’, he tells me. ‘But in judo it costs $350 for a judogi, and we need two of them.’

This goes some way to explaining Bolivia´s minimal haul of medals, as financially Bolivia simply can't match the investments made by Brazil or Argentina. Bolivian athletes instead must hope for external sponsorships to aid their cause. Michel recognises this, but he suggests that Bolivia misdirected the investment in preparation for the 2018 games. ‘In Brazil, they invest $40 million in Judo. In Bolivia, $4,000. While the government is investing in infrastructure, the athlete is being abandoned,’ he claims.

‘My experience in this competition has been very beautiful... it’s something very positive for Bolivia’s sports.’

A greater focus on investment in Bolivian athletes, their equipment and their personal experiences would help prevent a feeling of apathy within Bolivian sports. However, a country usually enjoys the positive effects of hosting a major sports event many years after the event has taken place. The passion of the crowd of young girls sporting 'Cochabamba Judo' t-shirts whilst cheering on Bolivian female judo athletes resonated with me. The impact of the millions of bolivianos invested in the new judo arena will not be felt now, but rather in the years to come, for these young girls will now have access to greatly improved training facilities. Simply witnessing professional athletes representing their country will be an invaluable experience for them.

There is potential for improving this relationship between Bolivian sports and civilians. The foundations have been laid by the 2018 Juegos Suramericanos. Despite his harsh critique, Martin Michel shares this feeling of optimism and puts the emphasis on the authorities to dictate such an improvement: ‘The authorities have to want it,’ he says. ‘The state can put some of the money and the rest can come from private companies. Together they can do very good projects.’

Only time will tell if hosting the 11th edition of the Juegos Suramericanos will stimulate greater engagement in sports within Bolivia. The necessary passion exists on all sides: from the volleyball ultras, to the Ministry’s major investment. Bolivia will look to the 2020 Olympics and the 2022 Suramericanos to see such passion emerge and improve this year’s mark: 34 medals, 5 of them gold.