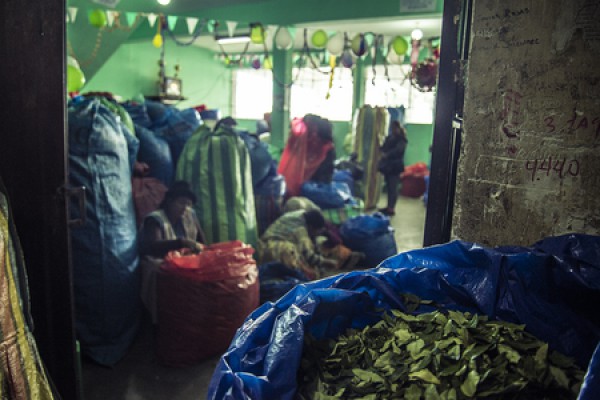 A licit market is slowly expanding for the Andes’ most iconic—and demonized—plant.

The first clear liquor scorches the back of one’s throat but nicely warms the stomach. It’s known as Spirit of Coca—Pachamama. The second has a sweet, mellow flavour that soothes the throat and is known as Liquor of Coca Akullico. These two spirits form just the tip of the iceberg when it comes to the many coca products on offer in Bolivia. They range from candies and energy drinks all the way to toothpaste.
Coca, which has played a role in Andean societies for centuries and is also the base ingredient needed to produce cocaine, is now the object of a campaign to broaden its appeal. Bolivia, the third-largest supplier of coca in the world behind Peru and Colombia, produces around 32,000 tons of coca a year. Some, of course, reaches the illegal market (around 20,000 tons a year, according to the United Nations), but the legal use and sales of the leaf have increased based on data for 2014 published by the United Nations Office on Drugs and Crime (UNODC). Coca accounts for around 1.5 percent of the Bolivian GDP, with a revenue of roughly US$283 million. This recent growth is due mainly to the development of a wide range of new products that local entrepreneurs have created.

One of the new breed of Bolivian entrepreneurs, Juan Salvador Hurtado, epitomises the reason the legal industry has been a growing success, drawing more farmers to provide coca leaf for this industry. His family-run business—which produces several coca-based products—includes his mother, Sdenka Silva, who runs a coca museum, and the family is deeply entwined in the traditions of coca within the Bolivian community. Juan describes it as ‘kind of a legacy, and my parents have been working on it as I have for a while already. So I think it’s in my blood in some way. I myself consume coca leaves and enjoy all the benefits of it . . . . I bond with it.’

Hurtado’s thirst for success is clear when I ask him about where he will look to sell his products next: ‘Peru will be our first big aim. I think next year we will look to do that.’ He offers a range of new products including coca candies, which are the strongest I’ve tasted. They start off with an intense bitter wave that washes over you. (I’d recommend not biting into it unless you want your entire mouth turning black!) ‘It’s strong compared to other sweets’, Hurtado says, ‘because they are just that—sweets with a little bit of flavour. What we are trying to have is the quantity as if you were using leaves in the traditional way. One lozenge has almost one handful of leaves.’

The family have been working in the coca sector since the industrialisation of the market, seeing many changes as different Bolivian governments come and go. Sdenka was in the heart of the industry during the peak of the war on drugs in the region, and she now uses the museum to tackle the debate from an academic viewpoint, documenting its history. Of the strong stance against coca, particularly from the United States, she uses the museum ‘to give a small contribution to solve this problem that is not very fair, not very clear, and not very truthful.’ The family sees coca as an important issue for the country’s traditions and economy, but because ‘it is mainly illegal, the doors to commerce will remain closed’ outside of Bolivia and Peru. But the family, ever hopeful, look forward to opening other markets in the future.
The scale of coca production in Bolivia is clear just from walking into the Villa Fatima coca market, one of only two of its size and scale in Bolivia (the other being in Sacaba, outside of the city of Cochabamba). The smell of the market is potent and lingering, and impossible to ignore. It looks like a military operation, as trucks line up out back piled high with coca and a continuous line of men carrying two bags at a time run inside delivering them to any one of the countless numbers of rooms stacked with coca. Money changes hands regularly, men and women buying and selling coca by the ton or in smaller quantities. As the drawers at the front desk pile up with bolivianos, it’s obvious that coca is big business here.

With around 300,000 families involved in coca cultivation, many Bolivian communities rely on it. However, current production levels are far too high for the legal demand. President Evo Morales, an ex-coca farmer, has been supportive of the industry, fighting for Bolivia to have special recognition of the historic and legal uses of coca. He has also curbed some over-production of coca with an anticipated third consecutive year of a drop in coca acreage of over 10,000 hectares in Bolivia. Sdenka sees this as ‘a step—and let’s hope that the symbolic step goes further.’ However, there is still strong opposition to the coca industry, particularly from the United States, after that country’s Drug Enforcement Agency was expelled from Bolivia in 2008. Morales has been attempting to increase the licit yield of coca leaf to 20,000 hectares for traditional uses from the current 12,000, although some studies have shown that only 14,705 hectares are needed for licit consumption. This highlights the ongoing battle that remains for the status of the coca leaf, in Bolivia and globally.

The difficulties for coca remain at the moment, but those within the industry itself are optimistic; they see a potential for future steps with greater recognition of Bolivian traditions and coca’s benefits. What does the future hold for coca—who knows?