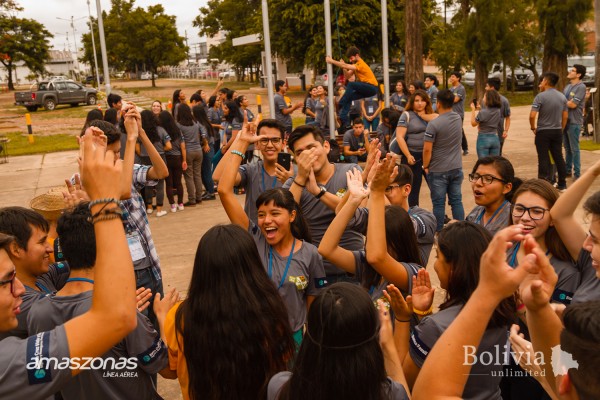 A catalyst for science education in Bolivia

In January 2020, Clubes de Ciencia Bolivia hosted its fifth-annual event. Participants took part in one of 15 different workshops, or clubs, consisting of five-day intensive courses. Three hundred and twenty-two students ages 16 to 22 took part in the event and, for the first time in Clubes de Ciencia Bolivia’s history, came from all nine departments in Bolivia. Impressively, it was entirely free of cost for those who attended. Each club was headed by researchers from universities like Harvard and John Hopkins, as well as the tech giant Google. Each workshop conducted various experiments, from creating genetic modifications using CRISPR technology to creating cyborg cockroaches that could be controlled by cell phones.

Clubes de Ciencia was conceived of in Harvard’s Departments of Molecular and Cellular Biology and Chemistry and Chemical Biology. Postgraduates and doctoral students from these departments were concerned that they had few peers from Latin America. They concluded that sources of inspiration were scarce for young people from some countries in this region, and that opportunities to engage with professional scientists who were active in their respective fields were in short supply. The grad students decided to provide such an opportunity. After some hard work and planning, the first iteration of Clubes de Ciencia unfolded in Guanajuato, Mexico, in 2014.

After attending the programme in Mexico, Mohammed Mostajo-Radji was inspired to bring a Clubes de Ciencia event to his home country. According to him, Bolivia was in desperate need of such an initiative. ‘Despite being one of the countries with the largest GDP investment in education, Bolivia consistently places last in the region in every measurement of education and innovation,’ says Mostajo-Radji. He set his sights on inspiring Bolivian youth to pursue STEM (science, technology, engineering and mathematics) careers, creating a support network in both Bolivia and abroad, and influencing the future of science education in Bolivia.

The clubs are designed and led by PhD students from top universities in the United States and Europe and co-led by PhD students working in universities in Bolivia. In the lead-up to the event, the two instructors spend many hours together preparing their workshop. The goal of this is to motivate collaboration between researchers working outside of Bolivia and within it, to encourage the sharing of knowledge and expertise and to ensure the students have an inspiring experience when it comes to their week of science.

Clubes de Ciencia adopts a participatory, hands-on approach to learning. This tactic has proven to be rather effective, says Mostajo-Radji, and ‘students learn a lot more in five days of Clubes de Ciencia than in an equivalent university-level semester-long course.’ What’s more, as discussed in a paper written by the group, it is ‘the methodology, and not necessarily the students’ background, that is responsible for this knowledge gain.’ This strategy therefore shows immense promise, especially in countries with limited resources and funds to put towards science education. ‘These results demonstrate efficacy of participatory learning in a developing nation, and suggest that similar techniques could drive scientific engagement in other developing economies.’

Clubes de Ciencia Bolivia has evolved tremendously since its more humble beginnings. Initially, it only had the capacity to accept around 100 students. This year, it accepted 322. While Clubes de Ciencia operates in seven countries, ’in Bolivia we saw an emerging innovation ecosystem that was pretty unique, so we decided to provide as much support to this reality as we could,’ says Mostajo-Radji. Forty percent of the workshops now focus on topics outside of the ‘hard sciences’, such as startup development, science communication and gender in science and technology. Additionally, Clubes de Ciencia Bolivia now incorporates two large events to cater to increased demand: HackBo, the largest technology hackathon in the country, and SymBo, a science, technology and innovation symposium targeted towards young professionals and entrepreneurs.

Although the event only lasts for one week of a year, the impression it leaves on participants lasts much longer. ‘Clubes de Ciencia Bolivia students have created about five science-outreach organisations that currently work in seven departments in Bolivia,’ says Mostajo-Radji. There are students like Leonardo Viscarra, who is creating 3D prosthetics and donating them to children born without limbs. All 20 of the Bolivian students that participated in the NASA Rover Challenge passed through Clubes de Ciencia Bolivia. As for fellowships and scholarships, ‘over half of the Clubes de Ciencia Bolivia students obtain some type of aid either in Bolivia or abroad,’ says Mostajo-Radji. As a result, there are Bolivian students studying STEM subjects all over the world.

Morales administration had a very protectionist philosophy, which made collaborations with foreign institutions and scientists a difficult task.’ This was a challenge for Clubes de Ciencia Bolivia since its closest collaborator and major sponsor was the US State Department. ‘We are firm believers in people-to-people connections as the best way to break diplomatic tensions and create common goals,’ adds Mostajo-Radji. A major landmark for Clubes de Ciencia Bolivia was when the Bolivian Embassy in Washington, DC, asked the organisation to devise a programme for the Bolivian community in the United States. In 2018, three workshops for students of Bolivian descent were held at the Embassy. In January 2020, the cultural attaché of the US Embassy in Bolivia and President Añez visited Clubes de Ciencia workshops in Santa Cruz. ‘While these may seem to be baby steps, for countries which have lacked formal diplomatic relationships for over a decade, these are important steps towards mutual understanding and long-term collaboration,’ says Mostajo-Radji.