Climbing the rocks of Bolivia 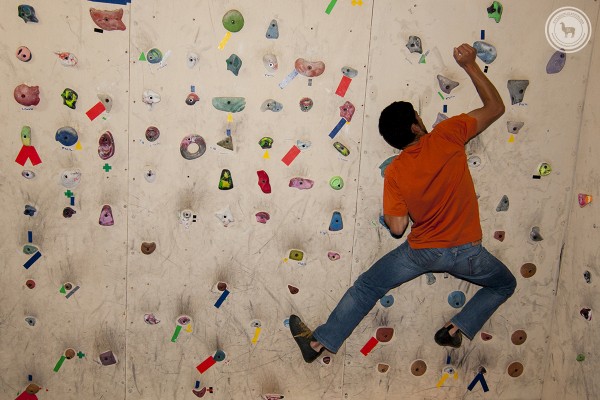 Indoor climbing in the city

Hidden in the Sopocachi neighbourhood of La Paz you will find La Cueva Boulder Gym. From the outside, the building looks like any ordinary home, but it houses La Paz’s premiere climbing wall. As the name suggests, the small entry conceals a cave-like space that is perfect for bouldering.

Bouldering is a climbing sport that is characterized by its short and explosive nature, which is why you don’t need high walls to practice it. When entering the cueva, I was surprised by the infinite climbing possibilities that had been created. On the night I visited, it was filled with a very enthusiastic climbing crowd.

Daniel Aramayo is the founder and owner of the gym, but above all he is a very experienced climber. He started climbing at the age of fifteen, inspired by his older brother to pick up climbing shoes and give it try. His first attempt wasn’t very successful, but after a few years he tried it again. From then onwards, he was infected by the climbing virus. ‘In order to improve your climbing skills you need to practise a lot,’ he says. ‘La Paz and its surrounding mountain ranges provide multiple possibilities to climb, but you depend on weather conditions.’ That is what encouraged him to build an indoor boulder gym with his climbing friends.

The gym offers sixty square meters of space and has 600 holds of all shapes and colours. They are colour-coded to mark different routes, from beginners to advanced levels. The Bolivian climbing community consists of fifty to sixty active members of different ages, but the cueva is not the only place where they come together. Daniel and his friends spend their weekends climbing at a rock formation called La Galleta, close to Zona Sur. They have set up over fifty routes by drilling bolts into the rocks in an area that is open to the public.

This group of climbers also hosts an event called Bloqueando. Its tenth edition will take place from the 28th to the 30th of October at Valle Challkupunku, 220km southwest of La Paz, near the Chilean border. Preparations for the anniversary include new boulder routes set up by the team.

José Luis Claure, an organizer of the event, is expecting about 150 participants of different climbing levels. This year, Bloqueando will offer climbing lessons, giving beginners a great opportunity to develop their skills. Besides climbing, there will be side activities to sit back and relax from the rocks, including volleyball, slacklining, and movies. As Claure explains, ‘It’s quite tough to climb the whole day, we need to chill as well.’

The organizers have made great efforts to prepare an promising event full of climbing, great food, and parties, surrounded by a beautiful landscape in the middle of nowhere, where you will pitch your tent (if you are lucky) under a sky full of stars.

Registration for Bloqueando is open. For more information, visit http://bloqueando.com/.