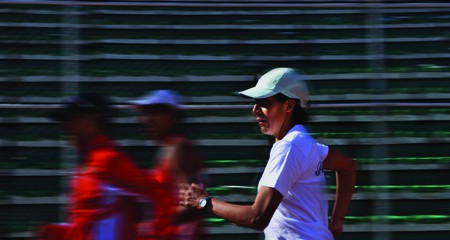 'We need women who are fighters, who are more enterprising. They must not be submissive'

'The only thing I can be is Claudia Balderrama. Nothing else. That is it.’ Claudia Balderrama speaks softly, barely audible, staring straight ahead without making eye contact. Her bearing belies the sincere force behind her words. This year Claudia is one of just fi ve Bolivian athletes travelling to London to represent her country in the 2012 Olympic Games. Her uncanny marriage of confidence and reserve is an expression of an extraordinary personality who has fought her way out of poverty to our interview today in the Hernando Siles stadium in La Paz.

Claudia will represent Bolivia in the sport of race walking, in which contestants walk as fast as possible without breaking into a run. Walking, for these purposes, is defined by striding with one foot always touching the ground, and with the back leg remaining straight. Claudia will race 20 kilometres in the London Olympics. She discovered the sport due to a chance accident three years ago when she ran a marathon in Bolivia. She had entered the race without proper preparation: having trained at distances of 12 kilometres, she found herself running 42 kilometres, and she damaged her foot. She couldn’t run for some time after that, and took up race walking. Now, she’s going to compete in that sport in the world’s premier athletic games.

coach in Bolivia, and they are supported by a trainer from the Mexican race walking team, Raúl González Rodriguez, an Olympic gold-medal winner in 1984. His team of two male race walkers trains regularly at altitude near Lake Titicaca and Chacaltaya, and as a gesture of support to its host country, the Mexican team has taken Claudia under its wing. Together they train on the highway to Copacabana, walking about 130 kilometres a week (about 35 kilometres a day split into two sessions, with Sunday as a day of rest). Claudia speaks of González as an inspiration to her to achieve highly, and González jokes that training with men has pushed Claudia to walk faster. Thus far she has had mid-range results, and González believes that this year she can aim to achieve a ranking in the top 16 Olympic participants.

Race walking is a little known in Bolivia, and Claudia says that ‘people here don’t understand what an Olympic event means, no one is interested . . . It’s very hard.’ It is no wonder Claudia hankers after recognition from her countrymen: she has come a long way to be here today. Born in Potosí in 1983, the fourth child in the family, she grew up in the industrial city of El Alto, outside La Paz. Although her father was a sports teacher, she says she never felt any pressure to compete, and her father supported her in everything she wanted to do. Nevertheless her path here has not been easy. In Bolivia, Claudia could only receive state support once she started winning, which meant that like her father, she had to work as a physical education teacher to support herself. Since last year she has been receiving US$1,000 a month from the International Olympic Committee, in addition to a smaller contribution from the Bolivian government. But Claudia remembers days when she went hungry as she trained, attended university and rushed home to care for her small nieces, whose mother had left to seek better employment in Argentina. Due to her level of physical activity, she needed to eat more than the other family members, but because there was no food around they all ate the same amount. Up until two years ago she did not even own proper running shoes. Her eyes glisten as she recounts: ‘I have suffered, but I know I’m not the only one, there are many others like me . . . I have been very lucky to meet people that could support me without asking for anything in return, and I am here thanks to them.’

González notes that for women in Bolivia it is more difficult to get involved in sport than in his native Mexico, and he’s proud of Claudia for what she has achieved. Claudia’s message for her fellow Bolivian women: ‘We need women who are fighters, who are more enterprising. They mustn’t say they can’t do things because of their husbands . . . They must not be submissive.’