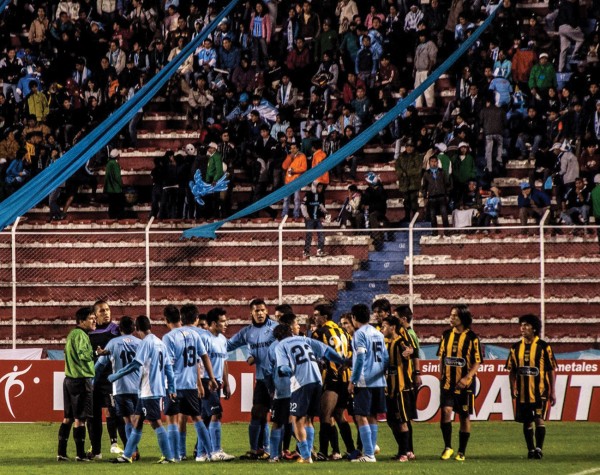 Passions always run high in South American football, but never more so than in the derby, or clásico games, taking place between local rivals. La Paz’s clásico, contested between the city’s two principal teams, Bolívar and The Strongest, is no exception. Boasting more than a 50-year history of official matches, this sporting fixture has had its share of highlights, lowlights and controversy over the years. Here are a few of the more notable events from its history:

The clásico paceño has always promised plenty of goals. The highest-scoring clásico ever occurred in 1978, when Bolívar defeated their rivals 6–3 and went on to defeat them again 6-0 the following year. However, in 2004, after an agonising wait of over 25 years, el tigre exacted their revenge on Bolívar for the humiliation and thrashed them 7–0. Strongest fans would perhaps say that it was worth the wait: this result remains the most decisive victory in the history of the fixture. Of course, ask a Bolívar fan, and they’ll say it was because Bolívar had put out a team full of inexperienced youngsters that day.

Strongest fans have reason to feel aggrieved over the controversial refereeing that marred the 158th league clásico in 2008. On the half hour, a Strongest goal was correctly disallowed for a previous foul on Bolívar goalkeeper Carlos Arias. However, soon after the referee missed a clear penalty claim when Bolívar’s Martínez fouled Strongest striker Miro Bahía in the penalty area. Things looked up for The Strongest when they converted a deserved penalty 48 minutes into the second half, but it wasn’t to be. As additional time came and went, the referee allowed extra minutes of play that facilitated a late Bolívar equaliser courtesy of veteran Colombian midfielder Arnulfo Valentierra.

One of the most fondly remembered clashes for Strongest fans occurred in December 1999 when los tigres managed to win the game 1-0 despite having played the entire second half with 10 men. Popularly named “The Last Clásico of the Century”, the victory was made all the sweeter seeing as the win earned The Strongest a return to the Copa Libertadores, Latin America’s most prestigious club football competition, for the first time in six years.

This year, in the 199th meeting between the two sides, The Strongest blew a 2–0 lead as Bolívar came back for the draw with 10 men. Controversial from the outset, an early penalty claim was dismissed by the referee when Bolívar’s Ivan Borghello was went to ground in the box. A red card for Walter Flores for obstructing a goal-scoring opportunity and the late equaliser in the form of a Bolívar penalty made this clásico one to remember.