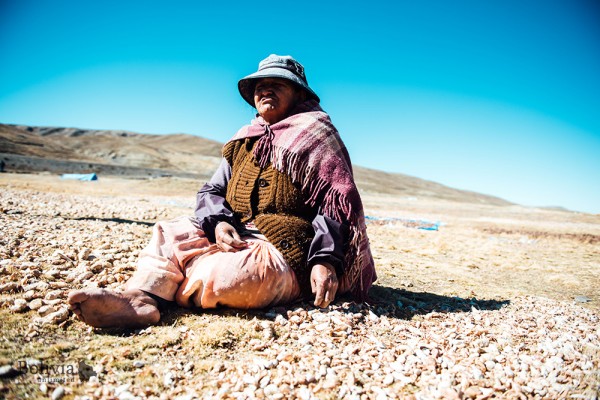 The chuño and tunta are traditional ingredients in Bolivian cuisine used in a wide range of dishes, notably chairo, a soup consisting of vegetables, meat and chuño. The use of these special potatoes has increased greatly in recent years with upscale restaurants utilising them in new and exciting ways. In order to learn about chuños and tuntas, I set out to La Cumbre, a mountain pass and the highest point on the road to the Yungas, where chuños and tuntas are often transformed.

The word for chuño comes from the Quechua language, meaning ‘frozen potato’, which provides a basic understanding of how chuños are made. On arrival to the Cumbre, I was taken aback by the traditional methods still employed today. Paulina, a woman who had been camping at the Cumbre with her daughter for three weeks to cultivate chuños and tuntas to sell in La Paz, explained the process that she implements. The process for the tunta is more complex and time consuming than that of the chuño, which is reflected in their differing appearance and taste. The chuño is small and black, compared to the tunta, which is white and slightly larger. The chuño itself tastes nothing like a Western potato, with the texture of a much denser food. This is part of the brilliance of the chuño; it is so vitamin-rich it is now considered a superfood, and due to its long shelf life, is a staple food in the Andean diet.

The first step of the process for making chuño and tunta is the same. Potatoes are scattered on the ground and water is sprinkled over them. They are left for three to four days during which they freeze through by night and thaw in the day. Due to the specific temperature requirement, Paulina explains that the process is only done  during the winter, in July and August, to supply for the whole year. Paulina then walks barefoot over the chuños and tuntas. By doing so, she separates the skin from the potatoes. This is where the process then differs. The chuño is left out in the sun to dry, whilst the tunta is submerged in water for a month in large sacks. The tunta is then spread out to dry in the sun, just as the chuño was.

Leaving Paulina, I want to know: why has there been such a resurgence in popularity for these small, shrivelled and ultimately unappealing looking foods? At the gastronomic restaurant Gustu in La Paz, we ask head chef Mauricio López. He tells me he has been experimenting with different ways to eat and enjoy the chuño; from modern spins on chairo, to blueberry soaked chuño accompanying lamb. Mauricio was full of praise for this ingredient and its uses in his food enjoying its versatility as an accompaniment. As Gustu champions Bolivian cuisine and ingredients, the chuño is commonly featured in its menus. But Mauricio also loves the tunta and tries to incorporate it into his dishes whenever possible. Its plainer taste makes the tunta a somewhat blank canvass for a chef.

Chuños and tuntas have recently made a resurgence due to their adoption at upscale restaurants. However, they have always been very prominent in traditional Bolivian cooking. Their characteristics, such as their incredibly long life and vitamin and mineral-rich make up has led them to be cultivated and eaten for many years. Perhaps in the future, they will receive international recognition as the superfoods they are, just as quinoa has in recent years.