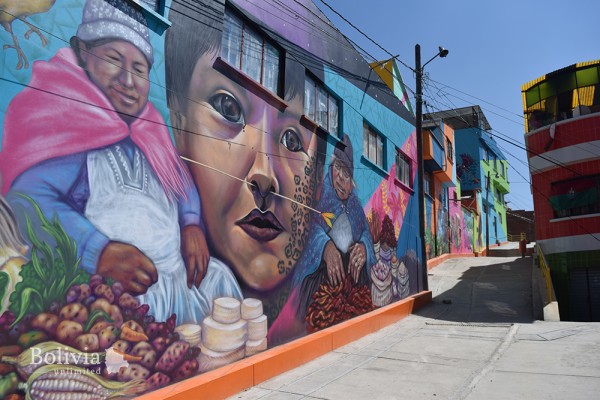 When travelling on the red teleférico line towards El Alto, you cannot help but recognise the brightly coloured homes that make up the neighbourhood of Chualluma. Amongst the brick and adobe buildings that dominate the landscape of La Paz, the freshly painted neighbourhood is a striking burst of colour. Its vibrant buildings are some of the beneficiaries of the ‘My neighbourhood, my home’ programme, and are also the latest project of one of Bolivia’s most innovative contemporary urban artists, Knorke Leaf. The Chualluma community, led by neighbourhood president Tomasa Gutierrez, presented a unique proposal to illuminate the neighbourhood with a range of colours and murals as part of the programme, which was launched in 2018 to strengthen urban infrastructure across Bolivia. After winning government funding, the transformation of Chualluma was carried out between March and July of 2019.

Under the leadership of designer and painter Knorke Leaf, the neighbourhood of Chualluma has been transformed into a picturesque setting that illuminates the landscape of La Paz today. Alongside the aesthetic transformation in Chualluma, key work has been carried out to strengthen the previously unstable infrastructure of the neighbourhood. More than 90 construction workers were involved in strengthening the foundations of the buildings, replacing the former foundations of adobe and bricks with cement blocks. Bannisters and stairs were also brought to Chualluma for its residents, who face the steep climb towards the altiplano from the lower, central areas of La Paz everyday. 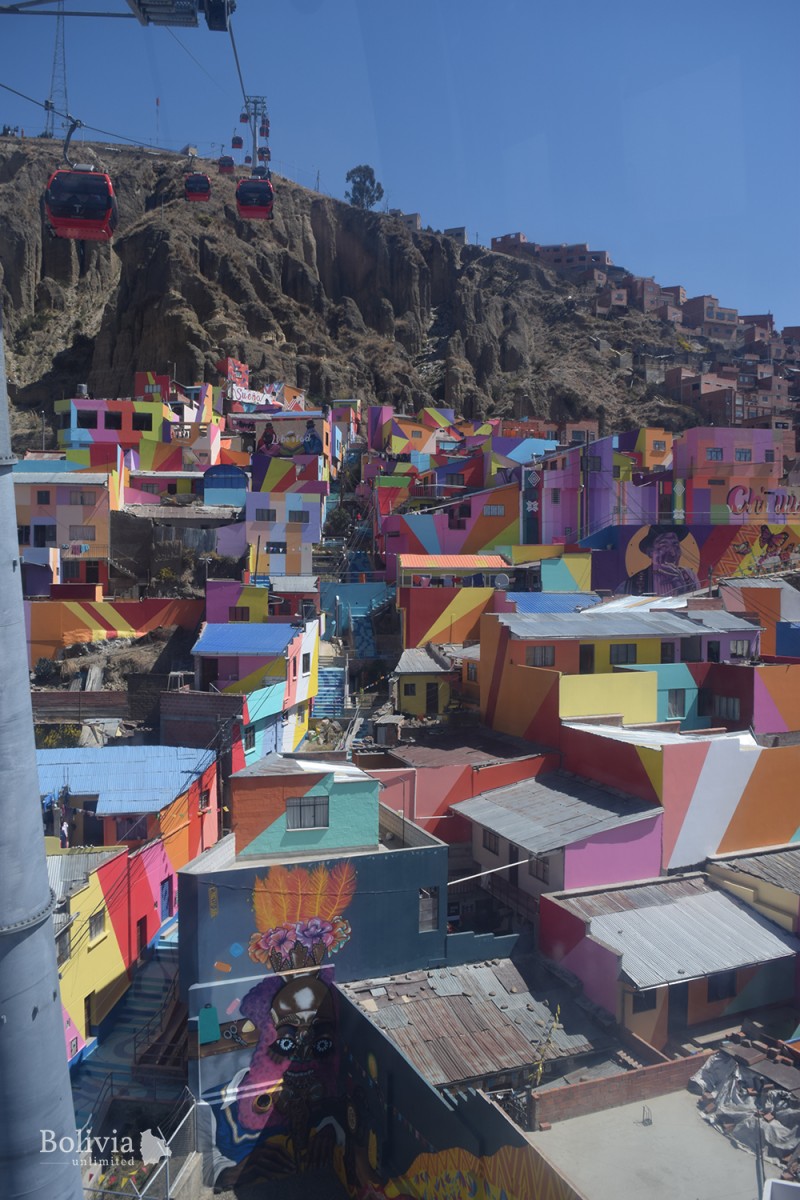 The most striking aspect of the project is the distinct focus on resident involvement. Whilst professional urban artists from outside the neighbourhood were involved in painting the homes, the people of Chualluma were crucial to the project’s success. Locals carried construction materials to each house to create the foundations upon which Knorke’s team of artists painted the art that exists today. The neighbourhood people also chose the colours that would adorn their homes from a palette of ten colours. For Knorke, the involvement of the residents was essential ‘It was really important,’ she says, ‘that it was never something that was imposed.’ Knorke came to Chualluma almost a month before carrying out the design to understand the neighbourhood so that the urban art could reflect the people who inhabit it. ‘All the murals, all the lettering that is here in Chualluma represents what they do, who they are and what kind of people live here. That was the most important part of the project – not just the touristic aspect, but to keep the neighbourhood happy and represent their culture.’

The project was not without certain issues. For example, Benita Choque, a resident of Chualluma for 40 years, commented that despite the neighbourhood meetings some residents were unaware of the project before the construction materials and paint were brought in. However, the prevailing atmosphere in Chualluma is one of satisfaction. When speaking to the residents, the overwhelming expression is one of gratitude towards the painters who have brought happiness and colour to their neighbourhood. For Rafael Quispe, a resident of Villa Fatima but who has worked for a La Paz public health company in Chualluma for eight years, the impact of the urban art has been dramatic. ‘The work done here has changed people’s outlook. Your surroundings impact your attitude and now people are more happy and motivated. Before people threw their rubbish outside the front of their houses, but now they care for Chualluma more.’ 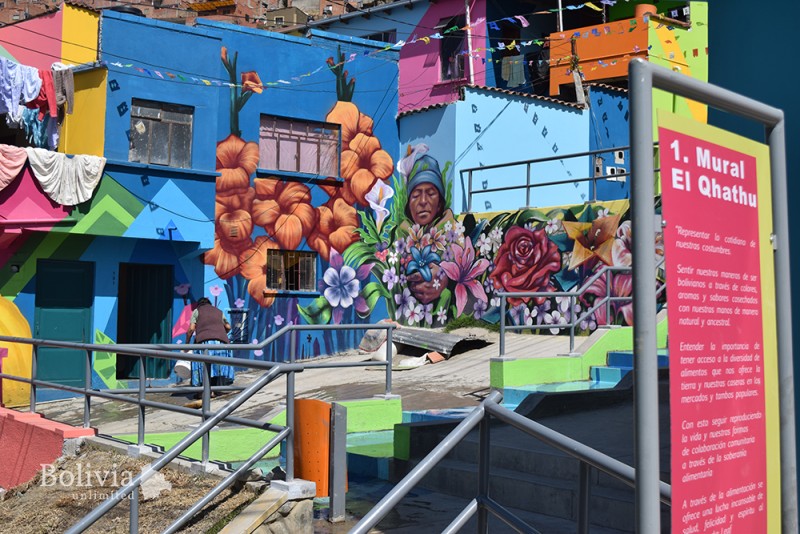 The Chualluma community is mostly comprised of migrants from rural provinces who live in La Paz to access the local economy. Many of the women sell food and produce in El Alto or La Paz, whilst residents work as tailors, construction workers and drivers in the city. With so many residents from rural areas, Aymara is the dominant language in Chualluma. Knorke was eager to represent this linguistic trait through the Aymara lettering that adorns many of the buildings. ‘It is a revindication. Visitors can come and learn. Yes, we are in La Paz, a multicultural place, but people here still speak Aymara. It is a beautiful and elegant language – it has a different way of thinking.’

Asencia, a rural migrant who speaks Aymara lived in the final house of Chualluma before the ascent to the altiplano. She has to leave the community at 5:30 am each morning to make the long descent towards Zona Sur where she sells street food. Asencia has faced a difficult life. She lost her husband and has a son who has struggled with severe mental illness. When Knorke asked what colour she wanted to decorate her house she chose orange – a colour that brings happiness. Struck by Asencia’s story of hardship and resilience, Knorke decided she would embellish Asencia’s home with a mural of a hummingbird. In Andean culture, hummingbirds have a spiritual quality, representing an individual’s ancestors when they appear. Knorke painted the hummingbird on Asencia’s house ‘so that they will take care of her and her family.’ For Knorke, ‘every mural is a story’ and the urban art that now decorates Chualluma is a representation of its inhabitants. 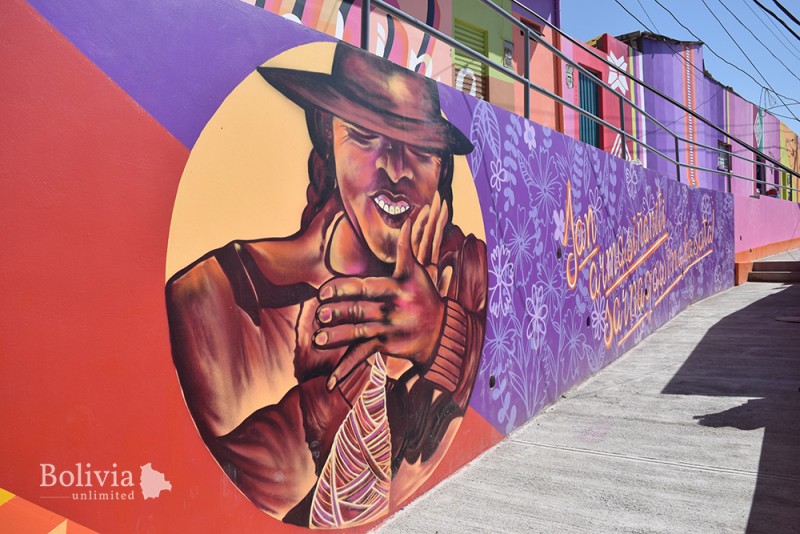 Knorke’s previous projects, such as her work on the #TimeToAct campaign against sexual violence, are evidence of the transformative power of urban art and Chualluma, her biggest project to date, is no different. During the five-month transformation process a micro-economy emerged in Chualluma, with local women cooking for the construction workers and painters. With continued organisation, there is potential for an enduring local economy to be established. Tourists, attracted by the radiant neighbourhood and its stunning panoramic views of the city below, have already asked about the possibility of creating a hostel or a restaurant in the neighbourhood to cater to visitors. The project led by Knorke has given the people of Chualluma a unique opportunity, and though the residents are not accustomed to the influx of tourists, Knorke hopes ‘it is a process that will happen.’

Alongside its touristic elements, the project has had a pertinent impact on the residents, construction workers and other people involved. According to Knorke, ‘It was a really special exchange of knowledge, food and views.’ Since construction, like urban art, is a sector dominated by men, Knorke found it difficult to get the male construction workers to respect what she was saying in the first two months of the project. ‘They were not used to having a female boss,’ she says, ‘but Tomasa and the women of Chualluma are also strong women, so it was a nice experiment to show our capabilities, strength and determination as women.’

Looking back on the project, Knorke says her work in Chualluma is ‘the biggest and most intense experience I have had, but also the most beautiful.’ For her, the project ‘is not just drawings on the wall, it is public art. It is a way to decentralise art and bring it to everybody.’ Although the brightly coloured houses are striking when seen from the teleférico approaching El Alto, the true beauty of the murals can only be seen from inside Chualluma. To witness the stunning artistry of the murals and appreciate the local culture, one must explore firsthand what Knorke describes as ‘a truly special neighbourhood.’ 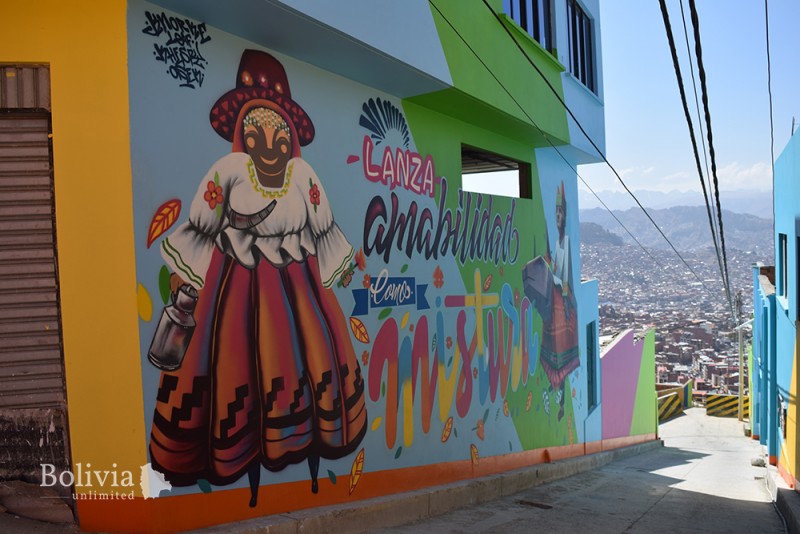