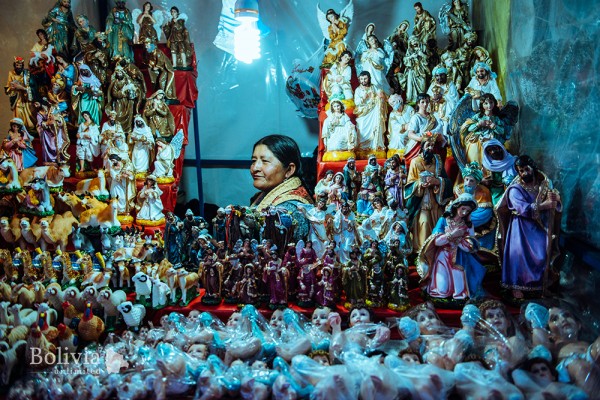 Exploring the quirks and staples of a Bolivian Christmas

Turkey, Christmas trees, fairy lights, snow and a warm fire: these are a few things that instantly come to my mind when the word Christmas is thrusted into conversation. Given my Western upbringing, my perception of Christmas is grounded in its setting (for me the blisteringly cold winter in England) and in the culture that has assimilated with this Christian holiday. But as Bolivia’s diverse range of Christmas traditions suggest, there is no such thing as a universal Christmas experience.

In our adventure of Christmas in Bolivia, we focus on the holiday’s very core, on the unique colonial traditions that have merged and evolved, giving form to local celebrations. In Bolivia, Christmas hasn’t merged into one suit and presents itself in various forms that almost mimic its linguistic diversity. From delectable dishes that bear no resemblance to European Christmas staples, to familiar sound of carol singers at the doors of fellow Christmas celebrants, Bolivia offers a host of peculiar and charming traditions that are worth exploring.

Food invariably plays a lead role in Christmases around the world, but whilst Turkey is customary in some European households, in Bolivia, the dish of choice is picana. Picana is a stew popularly eaten on Christmas Eve, made from a whole range of meats; including, beef, chicken, pork and lamb. There are numerous recipes that usually stem from grandparents, who in turn received them from their parents and grandparents. ‘We use beer, wine and vegetables,’ Patricia Zamora, a local paceña, explains, ‘but often people make it in a white broth, similar to chicken soup.’ Aside from the numerous ways one can prepare picana for the family, what remains constant is the time at which it is eaten. More often than not, dinner takes place close to midnight after a late evening service at the local church.

A few paceños have buñuelos instead at the stroke of midnight, saving the big meal for Christmas day itself. Buñuelos too plays a fundamental part in a Bolivian Christmas. Similar to a doughnut with a batter of cinnamon and flour, buñuelos are sprinkled with powdered sugar and usually served with hot chocolate. They make for small snacks during festive entertainments, but the local Christmas Market in La Paz supplements one’s need for a warm respite after a busy evening of present shopping.

Christmas markets have been around for decades in Bolivia. La Paz’s very own market off Avenida del Ejército in Parque Urbano is a Grinch’s nightmare supplying all the lights, candles, christmas trees, incense, miniature nativity sets (complete with miniature sandals for your miniature baby Jesus) and buñuelos one could possible want. But this Christmas oasis, which manages to obscure itself from the unfestive hustle and bustle of the Prado, offers more than goods, providing festive escapism and an opportunity to envelope yourself in the Christmas spirit. Some stall owners have even made a family tradition out of setting up camp on the winding market corridors.

In Bolivia, the adoration of Jesus on the day of his birth is very important, with feasts and dances that center around it. Many families across the country set up elaborate displays of the nativity scene, pouring their hearts and efforts into completing these pieces of art. Shoppers have no trouble finding figurines, scenic decorations and even clothes for the figures at the Christmas market. Whilst figurines are not unique to Bolivia, and can be seen across the world in many Catholic countries, what sets them apart are the different fashion elements they incorporate. Some Jesus figures are painted with a potosino or Andean motif, distinct in their hairstyles (often dark curl tufts) and the clothing sold with them, similar to the ponchos one can find on calle Sagarnaga, but a million times smaller.

Combining South American bombast and Christian tradition, this is a Christmas unlike no other.

No Bolivian Christmas is complete without festive music. Whilst in Europe families gather around a warm fire to sing soft traditional carols (or more modern tunes with a pop influence), Bolivian Christmas music has an upbeat, jovial feel. Adding to the atmosphere of animated jingles, Bolivians dance to the songs, skipping, frolicing and twirling. Children, parents and grandparents follow suit, all for the baby Jesus and the nativity scenes that embellish front rooms.

Bolivian Christmas is nothing short of a spectacle. Combining South American bombast and Christian tradition, this is a Christmas unlike no other. Although no blanket statement can be made for Christmas celebrations in the country, a summarisation of the food, places and traditions is all one can make to capture the festivities that Bolivia forges.