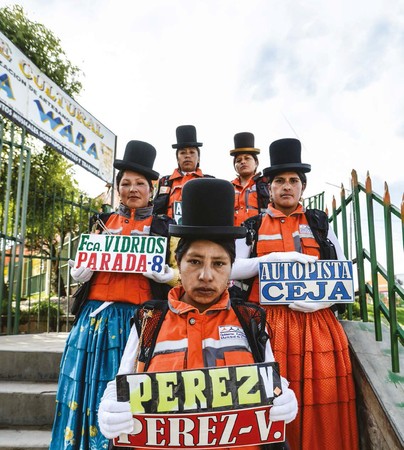 It’s been 10 months since El Alto introduced their Municipal Transport Guards (GMTs). It is the city’s response to the friendly zebras roaming the streets of La Paz, cartwheeling across the street teaching people about road safety. The GMTs in El Alto do neither of these things. They are stern, no-nonsense women known to locals as the Power Rangers.

Since last November, 20 cholitas have joined the GMTs and have been tasked with reducing congestion in El Alto and ensuring minibus routes are adhered to.

To track them down we spoke to Raúl Vásquez, Administrative Chief of the Municipal Guard. We were summoned to meet at 8 a.m. at the bridge in La Ceja (downtown El Alto). Unmistakable, with their grey and orange waistcoats, extra-high-crown cholita hat, pollera, and (of course) their massive earrings, they approach us with signs they have confiscated from the morning-shift drivers.

Liliana Cruz Quispe, one of these cholitas, explains how they work by shifts. ‘I start at six in the morning and have another shift at night. Now I must go to classes’. She is a Social Communications student at the local university.

With a firm ‘move forward!’ they usher along the drivers. To prove their worth they must succeed where others have failed. The cheerful zebras and amicable donkeys failed to gain the respect of Alteños, and so were confined in the gentler city of La Paz. El Alto has a well-earned reputation for being rebellious and indomitable.

This time the answer has from the from the pueblo. Despite the predictable sexist slurs they subject to, these women have a better chance of succeeding than their forebearers. As Mr Vásquez explains: ‘cholitas, women who wear the pollera are the essence of our people’. 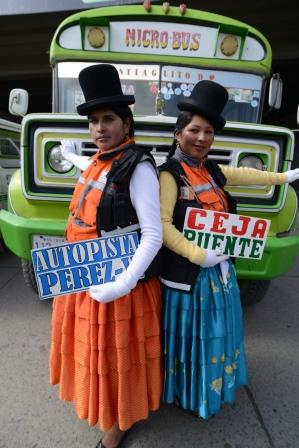