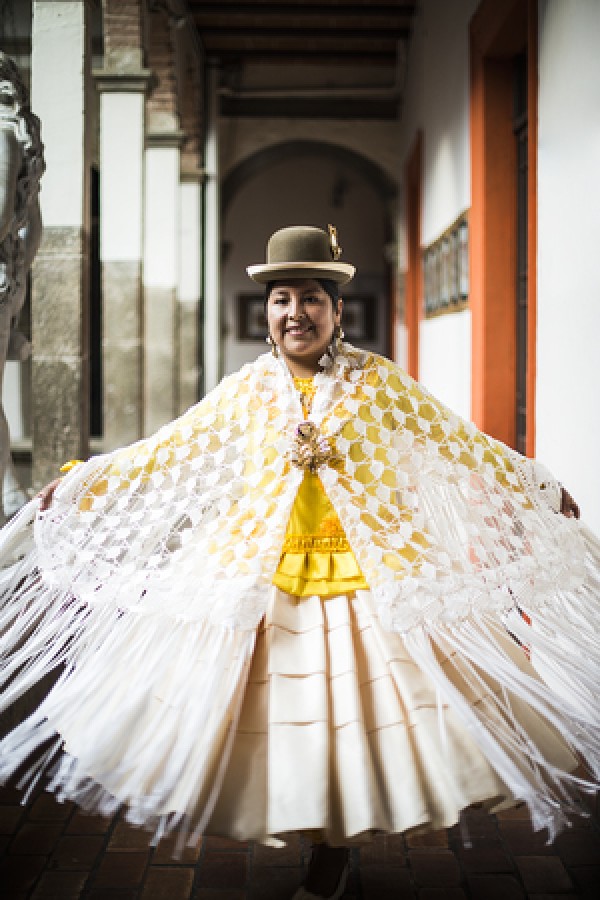 ‘The catwalk reminds people of the cholita’s new economic and social confidence in Bolivia.’
—Rosario Aguilar

Clad in dazzling embroidery, felt bowler hats, petticoats, and tight-banded flajas, twenty models line up in a long mirrored hall in the Hotel Torino. One by one they strut before each other, lightly touching their jewellery and twisting on their silk shoes. It’s an afternoon class for the pupils of the first cholita modelling school, and the tiled mezzanine echoes with the tapping of short heels and the rise and fall of conversation. Glowing in gold and yellow, María Elena Condori Salgado leads this Saturday's session, demonstrating the basic routines to the new students: clasping one’s broach, touching one’s hat. This wardrobe of gold and alpaca wool, María explains, is for luxury consumers. ‘To be a woman of pollera, you have to have money’, she says. ‘Besides being a very conspicuous outfit, it is also a very expensive one.’

You can't spend a minute in La Paz without crossing paths with a cholita on a street corner, or in a café or bank. A modern and uniquely Aymara Bolivian take on elegance that interprets aspects of colonial style, the daily dress of many of the women in the city has long been a recognizable thread in the city’s rich fabric. Dressed in essential pieces styled to personal taste, their shawls, skirts, and stockings drench the city streets with colour and an impressive sense of cultural heritage. Now the pollera is not so much associated with rural women of the indigenous communities as it is with a high-end fashion phenomenon, the skirts sported by Aymara and non-Aymara women alike. ‘Even women who usually wear dresses wear the pollera on special occasions to show off’, María explains. ‘Exotic colours and plenty of jewellery is what being a women of the pollera is all about.’

The cholita modelling school capitalises on this glamour. ‘At the beginning, no-one wanted to be part of it and the models were shy’, says Rosario Aguilar, a lawyer, former city politician and founder of the school. Up and running for ten years now, the school provides weekly workshops that challenge routine stereotypes of cholitas as belonging only to the urban underclass with the glitz and glamour of the twenty or so aspiring models. ‘It is very important for me to empower the women in pollera’, Rosario says before class. ‘Now, culturally and politically, these women are being accepted, and more than this, looked up to.’

It would be naïve to think that this urban update of traditional dress is not tied to the new economic and social prosperity of those who wear it. Once denied access to public and private spaces such as Plaza Murillo, restaurants, and taxis, many of these elegant women are now permanent fixtures in political and broadcast spaces, or run private and profitable businesses of their own. ‘We must value Evo Morales’s influence in this change’, says Rosario, reminding me of his decision to promote both parliamentary power and social dignity for the women of the pollera across Bolivia.This contributed to the rise of the cholitas, by increasing disposable income and encouraging entrepreneurial spirit amongst the cholita bourgeoisie.

‘The women in pollera are the protagonists of a great economical movement, paying taxes and contributing to the greater economy’, says Rosario, who has seen many of her friends move down to the moneyed suburbs in Zona Sur. But, she stresses, these women have always been empowered, hardworking, and entrepreneurial; it’s the changing social attitudes that have permitted their social and economic growth. No longer only recognizable amongst Bolivia's lower financial strata, these colourful skirts and bowler hats are appreciated today as symbols of status, a chance for Bolivian women everywhere to reclaim their Aymaran heritage and exhibit their growing wealth in modern society.

With Bolivia’s GDP per capita almost tripling in the past eight years, the people of La Paz are enjoying the perks of a consumer boom. Andean mansions in El Alto, Michelin-starred restaurants in the centre, and a proliferation of shopping centres across the city mark the new economic confidence you find here in La Paz. And showcasing Aymara culture at its most glamourous, ostentatious cholita fashion shows is a conspicuous example of this new affluence. Dressed head to toe in haute couture, Rosario radiates the economic success of changing times. ‘No one really knew about how much our clothes cost because we were discriminated against’, she explains. ‘The catwalk reminds people of the cholita’s new economic and social confidence in Bolivia.’ I look around the room glowing with gem-studded hair pieces and weighty gold jewellery and at once see that this is no exaggeration.

With public events like carnival, the Gran Poder and the infamous 17th of July celebrations setting a stage for wealthy Aymara paceños to showcase their prosperity, the demand for products—from US$500 Borsalino hats to US$180 petticoats—is on the rise. ‘Cholitas will use contact lenses, dye their hair, and wear makeup, and this is important for us socially’, says Rosario, smiling at me with gold-plated teeth. With jewellery costing up to US$20,000, some cholitas might employ security guards in large events to protect against attack. ‘In the cholita world, the most important things are the parties’, explains top cholita fashion designer Limbert Cussi. ‘It doesn’t matter if a cholita is selling salteñas or fruit from Monday to Friday, they will dress in almost unrecognisable elegance for special occasions.’

With plenty of new designs emerging from recognised Bolivian designers, unique pieces can now be commissioned for exclusive events and special occasions. ‘It’s not like picking out a pair of jeans’, Rosario explains, adjusting her vicuña wool manta with ring-studded fingers. Cholita fashion, especially at its most pricey, has found a new cachet in the last decade, and, as Limbert explains, there is no shortage of investors. ‘I work for people who can pay for such exclusive designs’, he says. ‘I prefer this market; they don't limit themselves financially.’ Specialising in items made of the luxurious vicuña wool, Limbert’s designs might cost up to $2,000 for the manta, $700 for the hat, and a further $200 for custom vicuña shoes. ‘The cholitas will pay only in cash’, says Limbert, lifting a great weight of air with mock gravity and dropping it on the invisible counter between us. Petty payments aside, in the world of high fashion there is no shortage of this cash. ‘A manta might cost me 5,000 bolivianos to make, but I will charge double and she will pay', he says with a smile.

Limbert holds up a card and makes invisible incisions down it with one hand, describing the pattern of his newest commission, a custom-made shawl ‘half brown, half white, delicately embroidered and all crafted from vicuña, of course.’ Rosario's modelling school has opened the markets for aspiring artisans, and new and exotic collections become the coquettish cholita. The financial prowess for these high-fashion ladies lies in exclusivity, in much the same way as Aymaran culture has forged colourful and unique trails through centuries of Bolivia's turbulent history.

The class comes to an end and the models file out, chatting amongst themselves, swapping numbers and taking posed photos with flip phones on the balustrades outside. All are hard-working women, their wealth and glamour less products of fortune than of the weekday hours spent in both formal and informal business. The excitement of what has been the first session for many of these women seems to twinkle in their rings and flutter from their skirts as they rejoin the bustle of central La Paz and their daily lives.