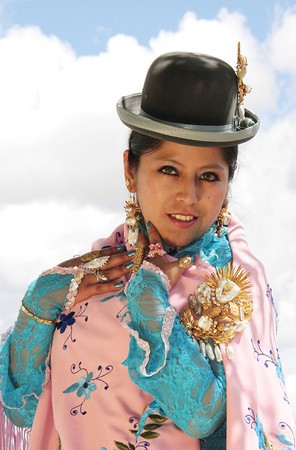 I find myself in the outskirts of La Paz, close to el Cementerio General. As soon as I leap out of the crowded minibus I am immediately greeted with curious stares from every direction. For local tradesman, rushing hurriedly to and fro to carry out their daily business, it is clear that I am an object of intrigue—my blue denim jeans, Timberland boots, as well as the colour of my skin, instantly set me apart from the crowd. Yet in this part of town I cannot help but reciprocate their curiosity. One group of people in particular stood out among all others—like peacocks proudly flaunting their feathers in a densely populated zoo. It was the exuberant cholitas and their unique plumage of clothes and accessories. In awe with the meticulous designs of their garms —noting their uncanny resemblance to the Yoruba attire from my family’s Nigerian homeland— it was the perfect opportunity to take photos. My first stop was a tienda specializing in cholita jewelry. As I took out my camera, carefully framing the perfect shot, the owner greeted me with an agitated reply: ‘No no Señor’—he hissed—‘¡No puede tomar fotos aquí!’ Bemused, I reluctantly returned the camera back into my bag. I had to wait another week to understand why I couldn’t take the photo.

Not being used to La Paz, one would be forgiven for being taken aback by the magnificent, sharply coloured attire of the cholitas. Despite the ubiquitous global influence of denim jeans, polo shirts and Ray Ban sunglasses here in La Paz, cholitas, as well as their fashion, remain an intrinsic facet of Bolivian highlands culture.

Cholitas often wear outfits as colourful as the myriad of fruit on display in some of their market stalls, yet many tourists may not fully acknowledge the significance which lies behind these vividly-designed outfits. With the variety of materials imported from all corners of the planet, from the Far East to Italy, these outfits often take a painstaking amount of effort and craft to produce. Much like with established Western fashion brands, cholita fashion is the aesthetic expression of a host of social and cultural values which encompass not only cholitas themselves, but designers, merchants and artisans. Their outfits are showcased at a yearly extravaganza called Gran Poder, a festival fuelled with an abundance of beer, religious hymns and endless dancing—sometimes lasting several days.

A complete outfit has several constituent parts. For a full set, one would need ‘el sombrero’, ‘la pollera’, ‘las enaguas (or centros)’, ‘la manta’, ‘los calzados’, and ‘las joyas’. These items more or less equate to what English-speakers would call the hat, skirt, petticoat, shawl, shoes and jewelry. The full set can cost up to 2500 US dollars (excluding jewelry), especially for eagerly anticipated events such as Gran Poder.

El sombrero (or hat) is one of the most distinctive elements of the outfit. It is often identified as an ornament which symbolically crowns the pride of the cholitas. These hats, which became fashionable in La Paz from the 1920s, are imported from a variety of countries, such as the USA, Germany and Italy. In the early 20th century, the crown of the cholita hat measured approximately 15cms in height, was predominantly white and had a wide straight brim. In recent decades the hat used has made an evolution of its own, notably gaining a pair of tassels dangling off the brim, a delicate band, as well as a decrease in crown height. Ivan Cussi, one of La Paz’s most established hatters, estimates the fashionable crown height in 2013 to stand at around 10cms.

La pollera (or multi-layered long skirt) can be made from a variety of materials: from velvet and satin, to chiffon and synthetic fabrics. The fabrics for these materials are often imported from the Far East, with cheaper skirts crafted from materials originating in China and the more expensive skirts being manufactured from fabrics imported from Korea. La pollera often matches the colour of the enaguas (petticoats), with pale and soft colours such as white, yellow and light blue. Las enaguas are usually made from lace. The petticoats are considered to be a crucial part of the outfit, since they add bulk and prominence to the pollera, giving it the distinguished wide bell shape the cholitas so highly desire. Another item which often matches the colour of the skirt is la manta. The shawl is a delicately-designed garment which can be made from a variety of fabrics—including llama wool. Frequently crafted from silk, the fine materials used are often embroidered, by hand, with floral patterns. The most expensive mantas are made from vicuña wool, arguably the finest natural fabric on this planet. Limbert Cussi from VicuArt makes these exclusive items for select clients. While he’s reluctant to talk about prices, we hear they can cost over Bs. 5000, or 4 times the minimum wage.

Los calzados (the shoes), like the other elements of the outfits, signify elegance and differentiation. Cholita shoe are generally made using leather, synthetic crystal, or plastic. These flat and open shoes undergo rapid transformations from year to year, with a plethora of colours used to match the rest of the outfit. The last component of the Cholita attire is the joyas (jewelry), worn on the hat and as a brooch on the shawl. A lot of the jewelry in La Paz is fake, however, for the grander occasions, such as Gran Poder, cholitas are known to wear topos costing upwards of 1500 US Dollars—items so coveted and dear that security guards are employed to escort the dancers throughout the parade. Cholitas’ large and heavy earrings are made from gold or fantasía, occasionally furnished with pearls (though Esmeralda Condori, a celebrity cholita, tells us silver is in fashion this season) . Furthermore, large pins—made from gold, silver or rhinestone—are designed to keep the shawl in its place.

Now, fully equipped with some knowledge of La Moda de la Cholita, I returned to the tiendas. As confident as a model striding down the catwalk I made my way to Diseños Esmeralda, a tiny yet cozy cholita boutique.

Perhaps, now, I would get my photo. I had arranged an interview with Eliana Paco Paredes, the owner of the boutique, to find out more about the cholita fashion industry. Proudly displaying a multitude of colourful recent designs, I was offered a seat to begin the interview. ‘Our biggest inspiration is nature, such as butterflies.’ Looking around the boutique, I was immediately taken aback by the originality of her designs.

Sensing my awe, Eliana asks: ‘You like? we are always looking abroad for inspiration but we always retain our culture… so for example if we’re talking of Gran Poder we may make prints with the image of the Virgin Mary and the rosary’. Intrigued, I ask her about their current innovative designs. ‘This year there have been a lot of designs based on emeralds, pearls and salmon.’ ’Salmon?’ I asked, somewhat perplexed. ‘Yes, we use silver and pink which are very light colours, which often seem strange but also look great!’

Eliana had given me an insider’s look into the world of a cholita designer. However, there was still one more thing I urgently needed to understand. I brought out my camera and took aim at the collection of neatly-placed sombreros. ‘No Mo, unfortunately I do not allow customers to take photos of my outfits. I’m sorry.’ I attempted to look surprised, trying my utmost hardest to also look disappointed. ‘It is impossible for us to take photos or show costume designs. The outfits must be guarded as a state secret until the day of delivery, because otherwise we would be risking the possibility of someone copying the model before it being displayed for the first time.’ Perhaps, the look of disappointment had carried through, for after a short pause she continued, ‘if you make a promise of never publishing these images, I’ll let you take a few photos. Show your friends and family at home but just make sure there is no sharing!’ I obliged, and began snapping away. There were only 5 or so photos taken, but I felt as if my mission had been accomplished. Content with my day’s work, I thanked Eliana wholeheartedly and made my way home happily—one would have thought I got myself a date with one of the beautiful cholita models Eliana showed me; such was the grin I carried on my face on the way back.