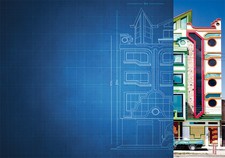 Gaudy and garish, the mini- mansions of El Alto stand as striking symbols of Bolivia’s new Aymara bourgeoisie. It is a phenomenon that has exploded so quickly on the polluted streets of La Paz’s sister city that there is still no accepted name for these architectural anomalies.

Labelled Kitsch, neo-Andean, cholo, cohetillo or any number of alternatives, there are roughly 120 such buildings across Bolivia. Most of them are in El Alto. Over 60 of them are the brainchildren of Freddy Mamani Silvestre — a mason who spent 18 years in construction work before a decade working in his current profession: architecture. These buildings, or ‘cholets’ –chalets cholos–, range from $250,000 to $600,000 and are invariably functional; with the lower floors housing the family business while the top floor provides a quasi-home for its owners.
According to Mamani, each building has its own distinct identity. ‘This is art,’ he says, ‘like music, and you get bored doing the same thing’. The buildings, though, are all stylistically similar. Mamani is the figurehead of this architectural movement that Gaston Gallardo, professor of architecture at the Universidad Mayor San Andreas of La Paz, describes as ‘baroque, popular, contemporary’. Its style is defined by the use of Andean symbols in tribute to Aymaran history; images of condors, vipers, pumas and –most prominently– the Andean cross have all become design staples. Mamani explains that the inspiration for his work stemmed from a visit to Tiwanaku, ‘I went [there] and began thinking that we should dis- play our culture through buildings with Aymaran flavours’. Edgar Patana, the mayor of El Alto, believes that Mamani has achieved this and that ‘his palette of colours is in harmony with the colourful weaving of the kallawaya culture, itself a descendent of Tiwanacotan culture’.
When Mamani first published a photo of one of his designs, it was labelled by one journalist as ‘chola’ architecture — per- haps with the initial view of dismissing it. The name stuck, however, and, rather than treating these buildings with the contempt that you might expect such loud architectural statements to provoke, people began to want their own, wearing it as a badge of Aymaran pride. Indeed, as Paola Flores explains, ‘the mini- mansions mesh modern and baroque architecture and flaunt, above all, two things: their owner’s wealth and their Aymaran heritage’. The harsh geography of the Altiplano has driven many Aymaran to the big cities to promote their individual businesses and this influx to El Alto has engendered a new social class — the nouveau-riche Aymara bourgeoisie. Rosario Leuca, a woman who began selling food in the streets and who has now built a second restaurant in her seven-storey Cholet, embodies this class and has a house to reflect it: ‘I am an Aymaran woman, proud of my culture, happy and full of colour. So why should my home not show who I am?’
Leuca is not unique in expressing this pride. In fact, Rafael Choque, 25, an agronomy student and citizen of El Alto says, ‘To me, it’s like a shout that says, “Here we are! This is what we are!”’; while Rim Safar, president of the Architectural College in Santa Crúz echoes this notion, explaining, ‘It is a way of saying: “I am a proud ‘cholo’; before I had no money, now I do, look at me!”’. The buildings certainly make a strong statement that Mamani believes ‘represents the modern Alteño because he is identified by his cutting-edge attitude: by his fight for economic, social, cultural, political, and now architectural identity’. However, while the buildings have taken on an Aymaran identity post-construction, they are not ostensibly proud statements of indigenous heritage. Rather, the movement seems to symbolise a reaction to traditional Western buildings: ‘I haven’t seen this style in any other place’, Elisabetta Andreoli says, who is an Italian architect and worked with Mamani on his recently published book. ‘I believe that many latin nations have tried to distance themselves from the modern and classical architecture of the northern countries.’
Outside the movement, though, the general consensus is that this architectural style stemmed from the arrival of Evo Morales, Bolivia’s first indigenous president. This, however, is a ‘gross injustice’ to its designers, Bolivian artist Santos –the brains behind the transformers-esque alteña architecture– tells me. ‘Morales didn’t design this house’, he says, indicating the huge baroque chamber where we are standing, ‘and he should not get the credit for it’. While Santos makes a valid point, it would be incorrect to say that Morales is not involved by association. From a purely financial standpoint, his government has presided over an economic rise and, by extension, an architectural revival –the industry grew by 8.6% last year– that has rendered building for excess, rather than necessity, a possibility. Perhaps even more significant to this movement is the fact that Morales’s tenure has brought about a swell in so-called Aymaran pride.
Pride, that well-documented chestnut, comes before a fall and we may yet see a retraction of such gaudy architecture. When such buildings are exceptions, rather than the rule, they are revered as progressive and revolutionary; however, with 20 such buildings under Mamani’s construction alone, ‘arquitectura chola’ is well on its way to becoming the norm.