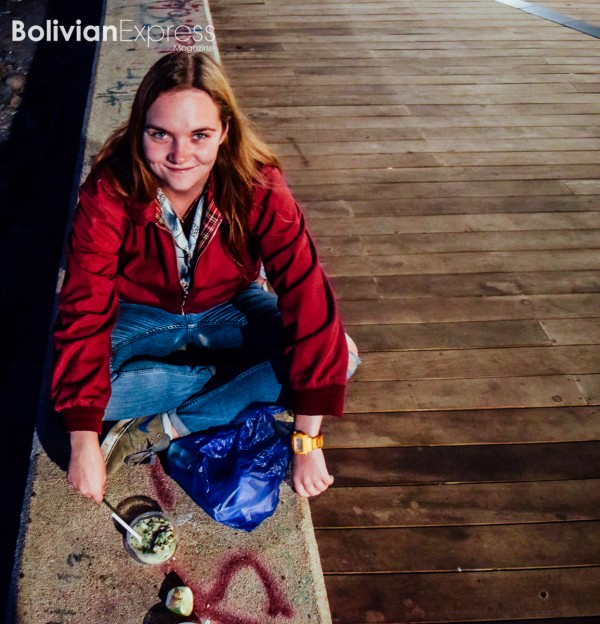 'What was the food like?' is a common question posited by friends and family to those who return from a trip abroad because many countries have a cuisine that is recognised worldwide. Italy has its thin-crusted pizzas, India has its spicy curries, and the list can go on. Bolivia, however,  has two western neighbours and, between the two, Peru far outweighs Chile in terms of culinary prestige. I decided to venture out of Bolivia to sample firsthand a handful of national favourites from each.

In going to Chile, to be honest, my expectations were not all that high, but my Chilean culinary journey showed me one thing: Chileans like their food, and with passion comes good results.

Donde Kery, a food stall located in a lively santiaguino market, was a place of high spirits, large characters and even larger portions. After much debate, I chose a chupe de mariscos: a salty assortment of sea-dwelling creatures, cream, pleasantly soggy breadcrumbs and cheese. Slightly too rich and not very subtly flavoured, the chupe was not mind-blowing, but it was satisfying.

My next lunch was in a rather different setting. The ‘Patio’, an upscale food court in Santiago’s plush tourist-filled Bellavista district, would not look out of place on the streets of London. Many of the eateries offer international dishes, but several other serve an array of Chilean favourites. I decided to sample the famous pastel de choclo, which had been described to me as 'a sweeter, Chilean Shepherd's Pie'. I was intrigued.

The topping of the pie is made from choclo, or corn, rather than potato. The mixture inside consisted of tender strips of beef swimming in a meaty sauce. Juicy black olives appeared from time to time, adding a bitter twist to the sweetness. If Shepherd’s Pie were this good, I wouldn’t have complained about its weekly appearance on my mum’s dinner repertoire.

I was told the filling of the pastel is the same as that in Chile’s empanadas de pino, the best of which can be found in the Chilean countryside. Grassy slopes, blue skies, olive groves and cacti, greeted us an hour after leaving the urban tangle of people, traffic and buildings. As we approached the town of Til Til, a row of stalls stood close to the country lane, a small table outside each.

The baked parcel came filled with a mild, salty cheese and copious green olives. Since olives are a specialty of Til Til, the quality was evident. Surrounded by the thick, savoury, almost bread-like pastry, it was one of the best empanadas I have ever had.

My companions, not yet satisfied by my Chilean experience, insisted I sample the local liquid specialty, the infamous Terremoto. Plagued by terremotos, or earthquakes, Santiago’s high-rise buildings are built to sway to the movement of quakes that have formerly brought the city to the ground. The unsuspecting human visitor to Santiago, however, has no such built-in mechanisms against the national drink of the same name.

The Terremotos arrived in tall glasses. A dash of red grenadine, rising into the brownish mixture of fernet and cheap wine, was topped off with a dollop of pineapple ice-cream. An inventive concoction, I must admit. I proudly finished the whole thing and left only slightly unsteady on my feet. A tremor at most. I was unconquered by the Terremoto’s lethal effects.

Moving north towards Peru, we found ourselves in the Chilean seaside town of Arica, which is located just 8 hours by bus from La Paz. This is a town for seafood, and plenty of it. A line of strong-smelling harbourside stalls were packing up for the day. A seller took a break from gutting various heaps of slimy seafood and handed us two small plastic tubs of ceviche. Raw fish, presumably caught that day, marinated in citrus juice with some onions thrown in. It was a small taste of the ocean.

Then we crossed the border into Peru, the country in which ceviche is said to have originated. I was excited for my, albeit shorter, sojourn in Peru, which is famed for its archeological sights, geographical wonders and culinary excellence. My only stop was in Arequipa, a place known as “The White City”.

When I arrived to the city, a neat courtyard dotted with white-clothed tables offered a wealth of typical food. I went for the doble arequipeño, a dish which – despite the name – consists of three regional favourites. A chicharrón de chancho, ubiquitous in various South American countries and basically a glorified chunk of pork scratching; a pastel de papa, made of layers of thinly sliced potato topped with cheese; and a rocoto relleno, which was the star of the show, an ever-so-slightly spicy pepper stuffed with minced meat.

After such a meaty affair, the following day I went in search for the famous papa a la huancaína. My empty-stomached wanderings came to an end in a sunny passageway directly behind Arequipa’s cathedral. Consisting of fluffy potatoes smothered in a bright yellow peanut sauce and topped with a sole black olive, papa a la huancaína is not the most aesthetically pleasing dish, but the spicy sauce was certainly tasty.

Chile and Peru may share a border, a coastline and variations of the same dishes, but there is one national treasure Peruvians refuse to share: pisco. Drugs, firearms and any foreign product bearing the name pisco are among the items that cannot be brought into Peru from Chile. Both countries produce the alcoholic spirit but, for the Peruvians, theirs is the only true variety.

My last night in Arequipa saw me in a city-centre bar. The distracting flashing lights and loud reggaeton tunes did not endear me to the place, but there was something I was yet to do: sample a Pisco Sour. The cocktail is made from Peruvian pisco, lemon juice and egg whites. The unusual final addition creates a fluffy, white layer which sits atop the other ingredients. Small yet strong, the drink certainly packs a bitter punch. After slurping the unique, sour concoction, I was ready to go home.

During the long journey back to La Paz, I reflected on my the week-and-a-half I spent sampling national dishes. Granted, I had steered clear of a couple of specialties that didn't tickle my fancy. The Chilean completo, for example, made my stomach turn rather than my mouth water. The highly processed mayonnaise- and-avocado-smothered hotdog is named by many as the country's best invention, but simply seemed unappealing. And, call me unadventurous, but the cuy, a Peruvian favourite, placed far too low on my list to have been sampled during my time there.

I returned to Bolivia content in mind and in stomach. I had enjoyed trying a new assortment of food and drink. But, after arriving to my destination, I was ready for a hearty portion of sizzling anticuchos bolivianos and a tall, refreshing chuflay.