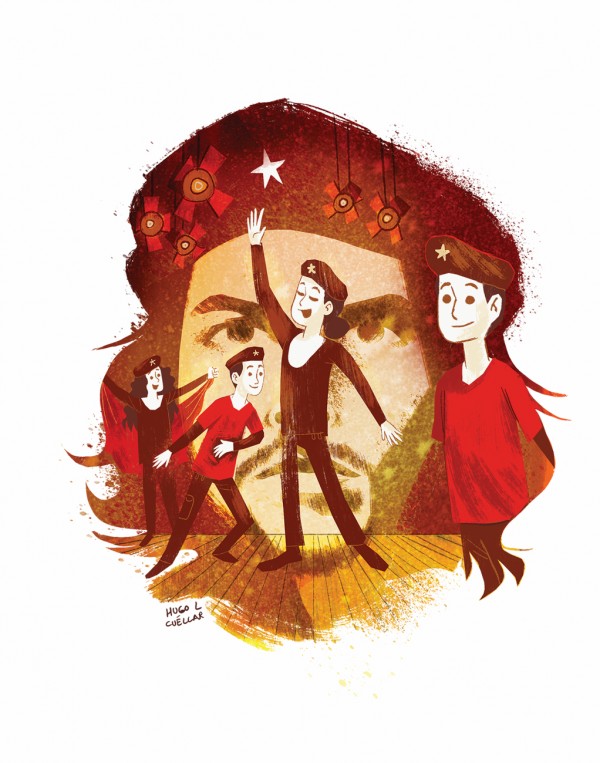 The Arts and History & Politics

The sing-along story of the marxist guerrilla

In the auditorium of Bolivia’s Central Bank in La Paz, a cumbia star leads a sing-along to a pop song whilst children wave flags and tail colourful ribbons across the room. Their movements are military in style and a sense of unease takes over as I watch twenty children punch their hands with intended menace.

Welcome to the Bolivian Anti-imperialist Youth, where children perform a musical interpretation of the life of Che Guevara, complete with a dance troupe. The Bolivian government chose to mark the 50th anniversary of Argentine Marxist guerrilla’s arrival to Bolivia with the performance. Although the story of Ernesto Guevara, known more commonly as “Che”, has undergone many changes since his death, this show may be one of its most surreal interpretations.

The musical presents Che not as a Marxist who took on the armed struggle of the global revolutionary vanguard, but as a commodity, an icon, a bastion of consumerism, whose face can be found on countless products, including t-shirts that are touted in London, Berlin, and the 16 de Julio market in El Alto.

Che entered Bolivia in 1966 to wage war against the military dictatorship of René Barrientos. He embarked on a unfruitful  guerrilla campaign in the east of the country, before being captured and killed in October 1967. The Bolivian Communist Party and a smattering of mining leaders – including Federico Escóbar Zapata – supported the campaign, but it never fully captured the imagination of the Bolivian working class. After his death, however, Che was turned into a revolutionary figure who fought to emancipate the Bolivian people from capitalism and oppressive dictators.

Through this interpretation, Che became a symbol of resistance and hope. His ideas penetrated the resistance to the dictatorships of the 1970s and galvanised the masses who helped bring democracy back to Bolivia. His visions were present in the infamous battles of Black October in 2003, where the Bolivian population rose up against the government and unceremoniously deposed the neoliberal orthodoxy; it was a moment that transformed Bolivian politics and eventually led to the election of Evo Morales. The influence of Che’s image extends to the offices of prominent government officials. His quotes are etched on the walls and desks of government ministries. This explains why a government-sponsored show about his life would be in order, but does not justify the form of Che’s latest incarnation.

Although the story of Che has undergone many changes since his death, this show may be one of its most surreal interpretations.

A group of mostly children marched onto the stage carrying the Bolivian flag and the wiphala. They started to dance and prance as cumbia star Monica Ergueta, dressed in a skimpy khaki outfit, sang along to the revolutionary song, “Hasta Siempre” by Nathalie Cardone. The effect was bizarre. Why was there such a show of nationalism at an anti-imperialism event? Were song and dance the best way to commemorate this revolutionary leader? It was, in my mind, ridiculous.

The adaptation, however, stuck in my mind, so maybe it was somewhat successful. The point of the event was to engage the Bolivian youth in politics and to teach them lessons from the past. Although they probably won’t forget the Che of the show, will they remember the revolutionary Che? Will they understand the reasons why he came to Bolivia? Will they recall the ideals for which he fought?

In transmuting historical figures – in changing water into wine, Martin Luther King into a peaceful protestor who always respected the rule of law, Nelson Mandela from a Marxist guerrilla to a patron of human rights, or Che into a comic figure – we loose the historical lessons that their actions hold. We lose the context, their drive, and most of all the revolutionary content. World-changers become little more than a face on a t-shirt or a pantomime hero waving a flag.