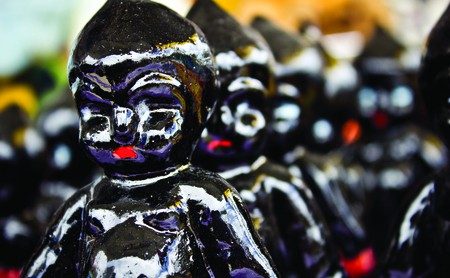 In his quest to find love in La Paz, Hayden Aldredge discovers how love charms, amulets, and the occasional spell are just a part of the normal search for passion in Bolivia.

Alasitas
Alasitas, the miniature craft fair celebrated every January, is really much more than just a fair. It’s an occasion for Bolivians to buy miniature versions that represent all the things they want for the year ahead, courtesy of the Ekeko, the God of Fortune. For women, a miniature cockerel has to be given to them by a friend. White for marriage, gold for them to find a man with mucho dinero, and black to break a bad spell or a tainted love. Men follow a similar process, except they use a hen, or a small figurine of a black woman. Once purchased, the miniature in question must be blessed by a Yatiri, preferably at midday on the first day of Alasitas. Vania Gonzalvez, a woman I spoke to, explained the power of these charms:
‘A friend once gave me a cockerel. I have always been attracted by this type of thing, and in a way I could say I like to believe magic exists. Believe that a miniature clay cockerel can bring you love? Why not. One or two weeks after I was given this amulet I met my first boyfriend. For the following two years I lived in La Paz I was given miniature cockerels, and wasn’t single during this period. It’s been four years since I left La Paz and have therefore not received an Alasitas cockerel. I don’t want to sound more superstitious than I probably already seem, but in all this time I’ve been single. Coincidence? Just in case, I have asked a friend from Bolivia to send me one.’

Color it Red
Bolivians go far beyond the average New Year's resolution. Instead of making goals that will be forgotten two weeks later (there go my Spanish language ), they view the occasion as a chance to profoundly affect what happens to them in the next yskillsear. Surprisingly, many of these rites involve underwear. If a person wants to find love they must wear red underwear during New Year’s eve. This is just one variant on the underwear belief: yellow brings happiness and money, green brings prosperity, pink for friendship, and white for hope and peace. If you want to get married, then precisely at midnight, sit down and stand up 12 times. Then, tie a red ribbon around a photograph of the person you want to marry and sleep with it under your pillow all night. This is supposed to ensure the person you love will give you his or her love before the next New Year's Eve. Lastly, if all you want in your life is a bit of passion, then just burn red candles throughout New Year's Eve.

A trip through the Mercado Sagarnaga is essential for any tourist visiting La Paz. While the llama foetuses and shopkeepers will catch your attention, what should really intrigue you (if you’re as interested in finding love as I am), are the amulets and love powders that line the shelves of these shops. I purchased two of these in the hope of finding love. One was a traditional love amulet which consisted of a very small bundle of objects, a couple made out of fake gold, and other small indistinguishable objects. I’m told I’m supposed to keep this in my wallet. The other item I purchased was a small box of powder -smelling very much like incense and tasting very much like soap- that I’m supposed to surreptitiously sprinkle into someone’s drink or food to make them fall in love with me. The box had a man and a woman passionately embracing with the words ‘Come to Me’ written in Spanish. While it claims to be a new formula, the powder (made in Venezuela) didn't quite work for me. That said, last time I checked, spiking drinks (whether with rohypnol or a suspect love potion) is illegal and, if anything, is an effective recipe to get you on the sex offenders register. But who knows, maybe I just need to use more of it next time. 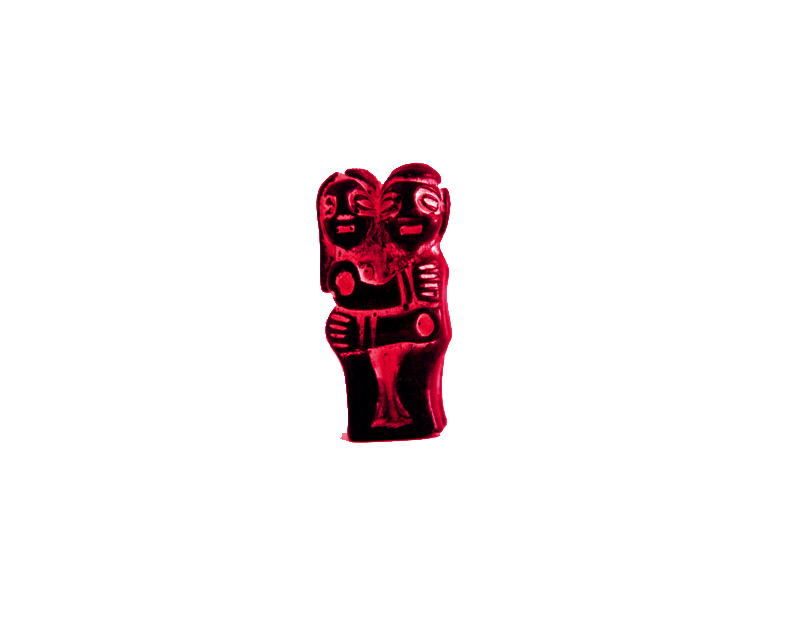 Munachi Charms
Perhaps the most inaccessible love charms that I came across were Munachi charms. These are amulets used by both Quechua and Aymara cultures to enact sexual love spells. One translation of ‘Munachi’ is ‘to cause to love’. The amulets are used in a simple love spell as follows: two pieces of hair, one from each of the lovers, are either wrapped around the lovers' necks, or doubled and threaded through the little hole in the object and secured by making a larks head knot. I did not get the chance to personally use one of these amulets, but was fortunate to talk to the renowned Kallawaya Edgar Pacheco. He informed me that these particular charms are made out of a stone called pachacha. This must be ritually blessed using the smoke of a plant called Myrocarpus Frondosus (sahumerio). In addition, the charm must be created specifically for the person who will use it; it’s no use just buying it off the street.

Mystics - Tamara y Salvador
For a less ‘generic’ approach to love magic, a mystic named Salvador veers away from the use of talismans and amulets. ‘Our work is more personal’, he explains, as he describes the seven-hour bonding ritual between couples that takes place in his practice. Unlike other similar services, Salvador’s rituals require love to exist between the couple in some form. His aim is to strengthen the bond between two consenting people, using existing feelings as a catalyst, not capture the love of an unsuspecting soul. The waiting area seems neo-modern and could easily be mistaken for a dentist’s waiting room, with a mostly red and white colour scheme (plus XBox). However, his office itself is filled with drawings of Christ, Buddha, and varying spiritual images. ‘I am a deeply spiritual person’ he tells us, ‘we work with spirits in order to achieve union’. Salvador was kind enough to show us the spirit he uses, Tamara, in the form of an intact, human skull he keeps in the cabinet behind his desk. Mysteriously, he also uses a second, more powerful spirit, the name of which he would not release to us, presumably used for more difficult cases. One thing that stands out about Salvador’s work is that it doesn’t require the faith of his clients, who simply need to have a ritual performed on their union. When asked about his clientele, Salvador insisted he was in no way lacking customers, something we observed during our visit. In less than half an hour six people turned up at his practice and his phone didn’t stop ringing. He has but one condition for his customers: ‘If you come and it works, you must recommend me’.

Edgar Pacheco Kallawaya
Kallawaya Edgar Pacheco is one of the most respected medicine men in Bolivia. Even if you ignore the multitude of awards and diplomas hanging on his wall, his mere presence will tell you that through a long life of practice and experience he has gained a true level of expertise. One ritual he mentioned needs to be carried out by the parents of a couple, who after going to the Kallawaya, ask for one item of clothing from each person, used to call their spirits, or ajayus. Once the spirits are invoked, then the couple can join in love. Another ritual involves a more interesting case. If a man is in love with a woman but the love is unrequited, then he might opt not to have a ritual to make her fall for him. Instead, the man may wish to take part in a ritual himself to make him forget her. This particular ritual involves a maceration of white rose and carnation, along with a few other ingredients that the Kallawaya could not disclose.