Changing the World Through Gastronomy 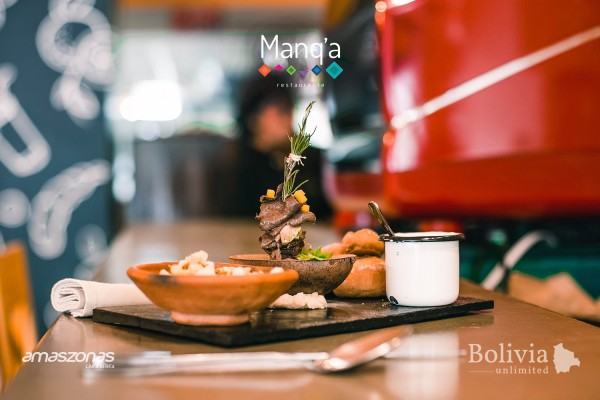 The programme looks to cultivate pride in its students for their heritage and the culture they come from. Photos: Courtesy of Manq’a / George Fearnley

Manq’a is a project to generate opportunities for underprivileged young people through the medium of gastronomy whilst supporting small, local producers in the sprawling city of El Alto, Bolivia. Over a period of five and a half months, students are given 800 hours of training in cooking techniques, hospitality and entrepreneurship, among other skills. Upon graduating, they receive a certificate granted by the Bolivian Ministry of Education. The only cost for those who enroll on the course is for their aprons (which they get to keep at the end). 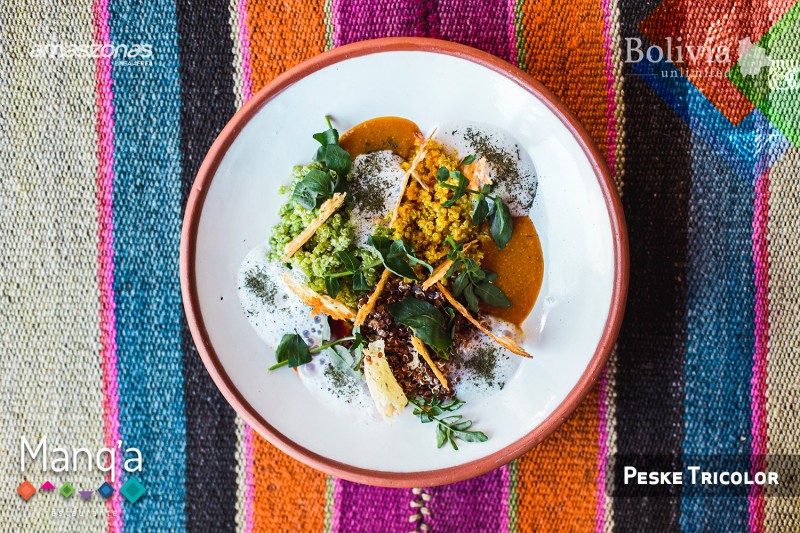 The first school was opened on the 4th of July, 2014, in El Alto, the city that sits on the lip of the altiplano above La Paz. ICCO Cooperation (a global NGO) and ‘Melting Pot Bolivia’ (founded by Claus Meyers of NOMA and Gustu fame) started the project in 2013 in Bolivia. Initially Manq’a was set up to help underprivileged young people living in El Alto find work and teach them how to eat a more nutritious diet. This was a response to the high levels of obesity, malnutrition, violence and unemployment present in the youth of Latin America. In 2014, it was estimated that 27 percent of women in Bolivia of child bearing age were considered so anemic (likely as a result of a poor diet) there was a significant risk of passing on an iron deficiency to their unborn children. Part of the founders’ proposal was that everything cooked and eaten in Manq’a schools had to be Bolivian and healthy, and it had to be sourced from small, local producers. There were initially three schools in the city of El Alto, but after some financial backing the number grew to 10. 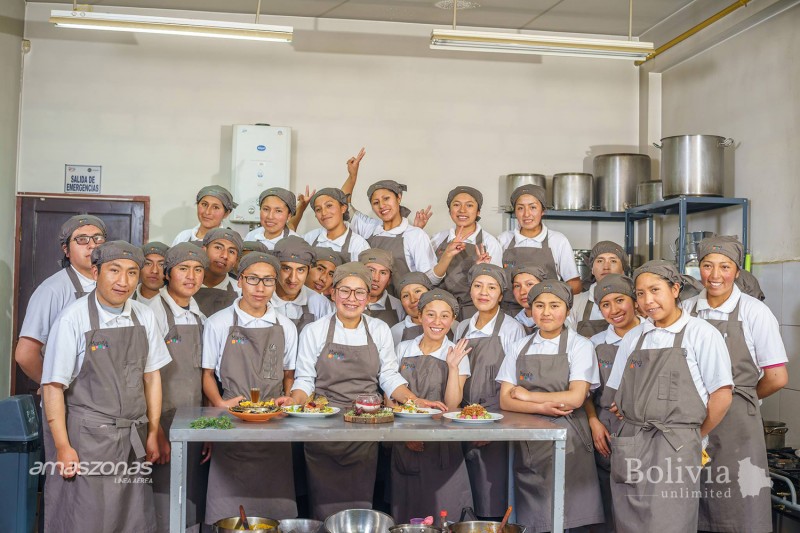 While it was starting up, it became evident Manq’a had potential beyond its initial purpose. ‘We noticed lots of the students attending classes at the schools were coming from families who owned small businesses or who were interested in starting a new business for themselves,’ says Wara Gonzalez, project coordinator at Manq’a. Young entrepreneurs enrolled at Manq'a are trained under a different scheme to those in the gastronomy school that includes youth entrepreneurship classes, help and advice in creating business plans and acquiring seed money, assistance in the implementation of businesses and mentoring. On top of this, funding was secured to give young people a hand starting their new business or give them the opportunity to expand an existing business. 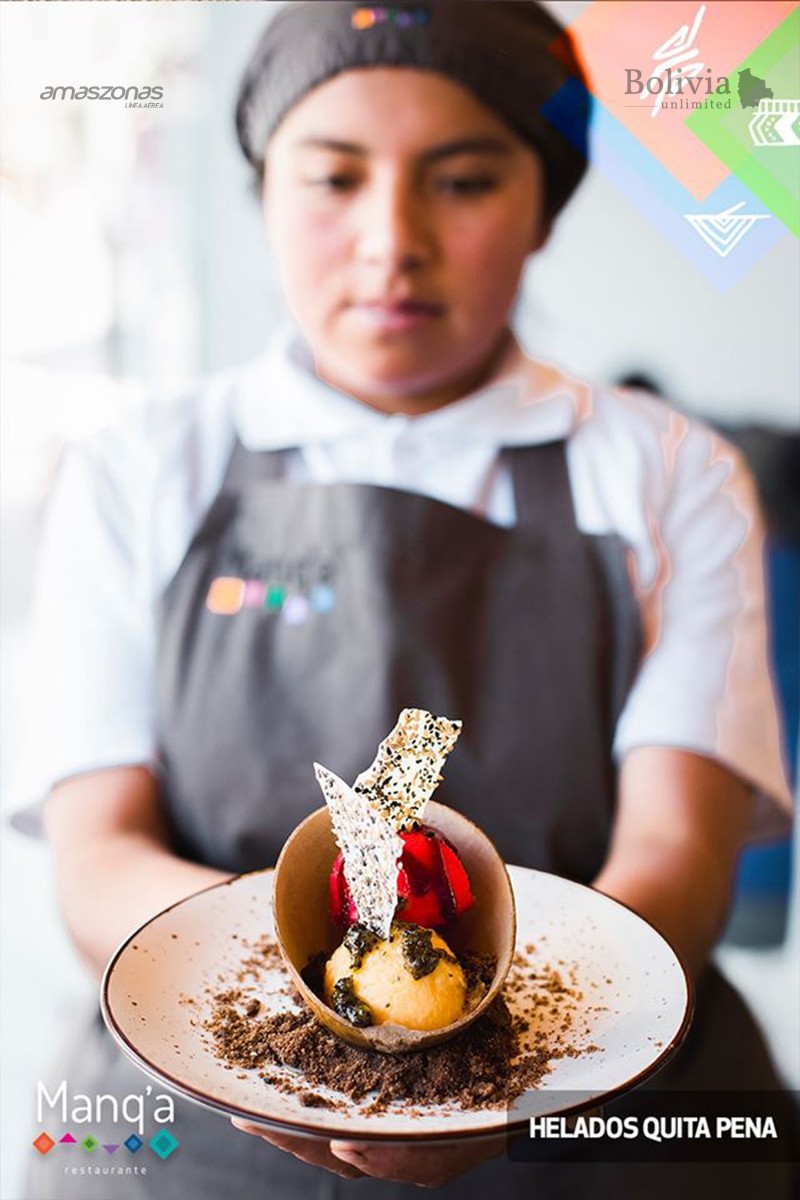 "Students are encouraged to take a fresh approach to the food they prepare."

This also led Manq'a to the concept of inserción laboral (labour insertion), in which the organisation consults with local companies to help identify areas where workers of a particular skill set are in high demand, helping Manq'a graduates find employment. After identifying areas where there are vacancies, Manq'a proposes basic training in that particular field and the student completes a two-to-three-month internship with a relevant company. Finally, the students are given jobs at that company where they interned, or another in the same field. Once employed, Manq'a's role is to ensure favourable working conditions for alumni. This alliance means 'businesses become participants and co-responsible for the development of the young people they employ,' explains Gonzalez.

Students are encouraged to take a fresh approach to the food they prepare. 'Before, the attitude was always to use traditional products and stick to the recipe,’ says Gabriel Vargas Quenta, the head chef at Manq'a's Sopocachi restaurant. ‘Here at Manq'a, we give students the confidence to play with recipes and the way food is presented on the plate.’ However, while a new take on things is encouraged, tradition is also valued. Manq'a urges people to share their knowledge from working in a small family business or cooking traditions passed down through the generations. 'For example, I remember asking one of the students, "Why are you toasting this?" and they responded, “Because in the countryside, when we toast this with some pine or eucalyptus, it ends up having more flavour,”’ says Quenta. Many of the students coming to the schools already have an abundance of knowledge and experience, and they are encouraged to demonstrate this in the schools.

It is in this vein too that the programme looks to cultivate pride in its students for their heritage and the culture they come from. Manq'a is the Aymara word for food. It was chosen to reflect the backgrounds of a majority of the young people who enroll on the course. Often when students arrive, they don't value their ancestral roots. Gonzalez recalls a conversation with a former Manq'a pupil: ‘He told me he used to take his girlfriend out for burgers, because that was considered cool. Now, he takes her out for very traditional foods like pesque de quinoa, for example.’ Through studying at Manq'a, students strengthen their connection with their heritage so it becomes a source of pride. The course lasts five months at Manq'a so that it isn’t too much of a financial burden on students who have to take time off work to attend. 'In that period of time, it is really the process of empowerment that is the focus,' explains Gonzalez.

The philosophy adopted by Manq'a is one that is being adopted more and more around La Paz. Cafes, cafeterias and restaurants are serving Bolivian food made from Bolivian products. If you go into a cafe now it is likely that the coffee you drink has come from somewhere in Los Yungas, the more tropical region a couple of hours drive north of La Paz. This gastronomic revolution is getting well-deserved attention, with the BBC recently describing La Paz as the 'next food hotspot'. Something that Manq'a claims it has directly inspired and is now being adopted by other businesses is its collaboration with other companies. It has now established what it calls ‘Friends Network of Manq’a’, consisting of more than 80 companies who agree with the ethos of Manq'a and want to support it by providing opportunities for the young people who have graduated. ‘There is no competition, since the companies involved are working towards a common goal,’ says Quenta. ‘Manq’a looks to help people who would otherwise have a very slim chance of entering the world of gastronomy.’ 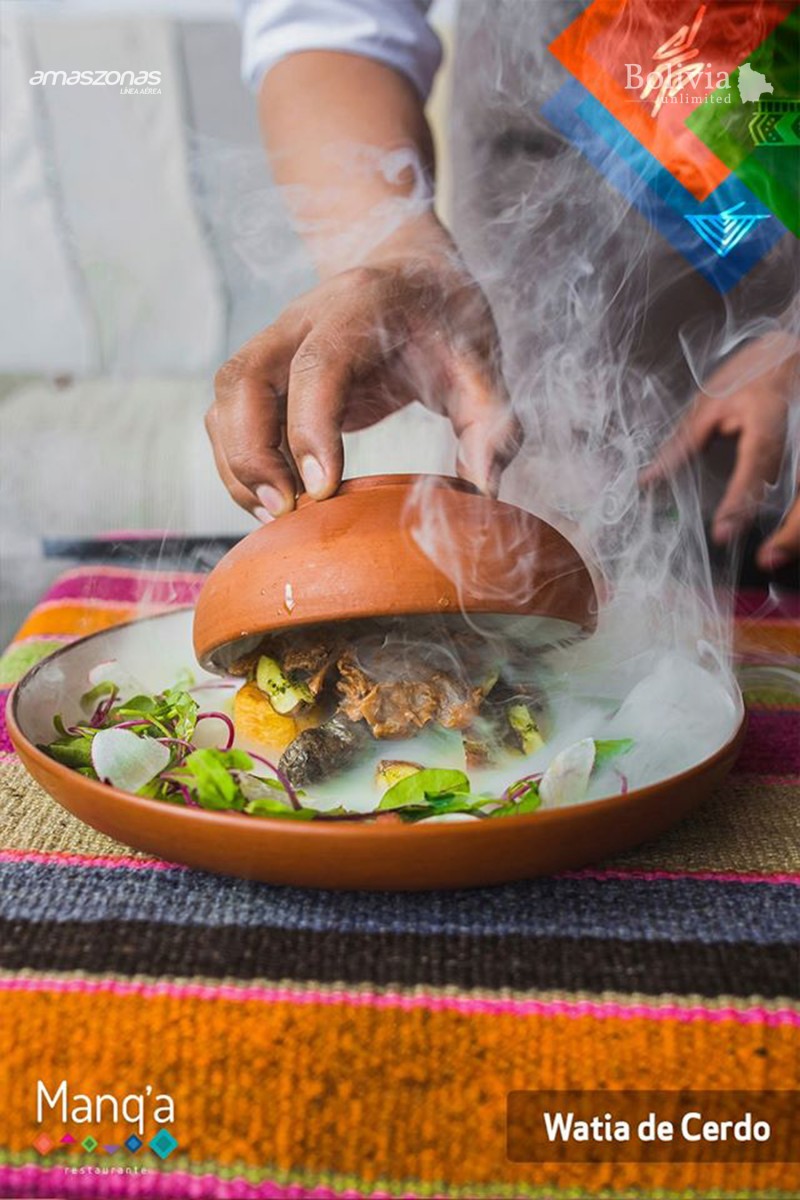 The success of this model has led to two schools being opened in Colombia to help young people who have been displaced by that country’s long armed conflict. Additionally, the Bolivian Ministry of Education has requested that Manq'a help transfer its business model to the alternative-education centres, because it works without requiring lots of investment to get going. ‘The schools are very simple,’ explains Gonzalez. ‘They have very simple, basic equipment. The young people of Manq’a learn how much they can achieve with just the basics. They learn they don’t need a huge amount of money to create and cook.’

"The programme looks to cultivate pride in its students for their heritage and the culture they come from."

To date, 3,600 people have been trained at Manq’a, with 58 percent currently employed, and 156 alliances with external companies have been forged. Over 150 local producers are provided an income by working with Manq'a, and 52,000 lunches have been served through the schools and the restaurant. It seems Manq’a and everything it stands for is having a tremendous impact in Bolivia, and there is no reason to think this won't continue into the future.