CHANGING THE FACE OF EDUCATION 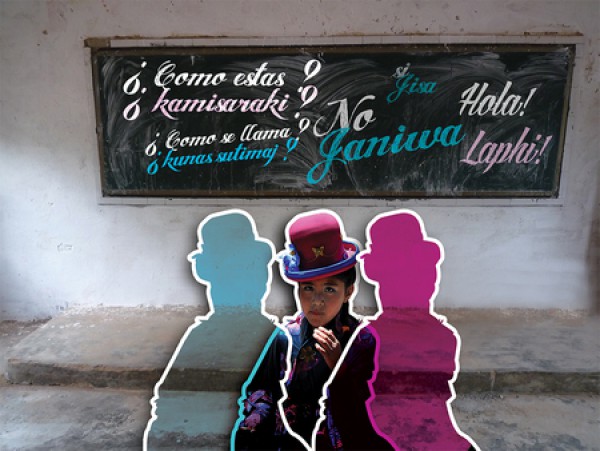 On an unusually cold and miserable Wednesday morning, I wander the streets of El Alto in search of Colegio Amauta, the starting point of my investigation. Splashing my way through streams in the roads and shivering from the bitter altiplano wind, I am guided by a kind, elderly alteño who leads me to the school, hidden on a quiet road in the Ciudad Satélite neighbourhood. He stops at a small terraced house with white gates and green hedges—this unassuming building is the school I am looking for.

The head mistress leads me into a tiny classroom where ten eager faces smile at me. The children, no older than seven, greet me with an hola señorita and a wave. It is 11am and these children are being taught Aymara by their teacher, Clarissa Zapana. Colegio Amauta is a colegio particular, a private school with a friendly and bustling atmosphere, authentically shabby interior and small class sizes—10 students compared with the usual 45.

In this school, almost all of the teachers are of Aymaran ethnicity, according to the headmistress, Beatriz Alvarez Ordoñez, who openly talks to me about the importance of Aymara in a school like this. ‘In the context we have here in El Alto, the majority of people come from Aymara cultures’, she says. ‘So it’s important that children learn Aymara, to communicate with their grandparents, for example.’

Changing the Standard of Language Education

This private school has taught Aymara throughout its 30-year existence, but the teaching of indigenous languages in Bolivian schools has not always been accepted across the country. In fact, observing this class of eager students, it is easy to forget that not long ago official Bolivian policy dictated that everyone speak Spanish in school, and indigenous languages were heavily suppressed. The education reforms of 1994, however, introduced more funding for schools, which improved teacher training and curriculum whilst promoting bilingual education. But the bilingual requirements remained vague until the government, under President Evo Morales, enacted additional reforms in 2010, when clear requirements were set for multilingualism in schools.

The 2010 Avelino Siñani–Elizardo Pérez Law, named after two historical figures who also tried to better education for the indigenous population, covers many facets of education in Bolivia. It makes revaluing indigenous cultures, languages and knowledge a cornerstone of the Bolivian educational system. The law also names trilingualism as one of the Bolivian education system’s goals: students are encouraged to learn an indigenous Bolivian language and a foreign language in addition to acquiring proficiency in Spanish. As well as the promotion of language learning, Morales’ government invested more into teacher training than the previous reforms had, according to Dr. Mieke Lopes Cardozo of the University of Amsterdam.

But it’s not always easy to bring a language into official school curriculum—or develop standardized assessments. Ordoñez explains that ‘There are specific Aymara teachers, but there isn’t a marking scheme to grade Aymara like they can grade other subjects, [such as] social sciences, English and other languages. What needs to happen is for the Aymara teacher and another language teacher to sit down together and come up with a way of grading the students they have.’

At Colegio Amauta, I also spoke to Clarissa Zapana, an Aymara-language teacher, who told me about her teaching method. ‘What I mainly teach the pupils are greetings, through using flashcards with the Aymara words and phrases written on, and then I repeat the Spanish translation aloud’, she says. Zapana then explains that written Aymara is very difficult, and so is the grammar, so the children mainly learn on an oral, repetition-based method.

The meaning of language goes far deeper than daily communication. Juan de Dios Yapita, an Aymara and Spanish professor at the Spanish Institute on 20 de Octubre in La Paz, says that learning Aymara couldn’t be more important. ‘Language is an identity’, he says. ‘It reflects the culture you are from. So if you don’t speak the language, how can you understand your culture?’

Speaking to Walter Gutierrez Mena, the head of interculturality and multilingualism at the Ministry of Education, I receive an insight into the governmental view on languages as part of education in Bolivia. Mena explains that Bolivia is one of the only countries in the world that has laws governing indigenous languages in schools. ‘Indigenous languages strengthen the identity of Bolivians’, Mena says. ‘Spanish allows Bolivians to physically communicate with each other. And foreign languages allow them contact with the world.’

At the same time, Mena acknowledges that not everyone is on board with these changes. For example, some parents don't want their children to learn indigenous languages at school, as they don’t think they are worthy. ‘As a consequence of colonisation, there are people that reject their heritage. There are people that say, “I don’t want to learn an indigenous language, I want to learn a foreign language, like English or French.”’

Leonardo Favio Mollo Conde, who works at the Vice Ministry of Decolonisation, talks about the not-so-distant history of the repression of indigenous languages in the country. ‘They made it obligatory to learn Spanish’, Mollo Conde says. ‘Obligatory to forget Aymara. It was a synonym for backwardness and barbarism.’

But now, speaking Aymara is fundamental to the survival of the culture itself, Mollo Conde says. ‘The youths in El Alto, they consider themselves Aymara, but so many of them neither speak nor understand the language. They identify as Aymara, but they can’t even understand their mother or their grandmother. It’s a question of identity.’ However, today Mollo Conde is hopeful. ‘These laws have forced the revaluation of indigenous languages’, he says. ‘Because of that, the future looks promising.’