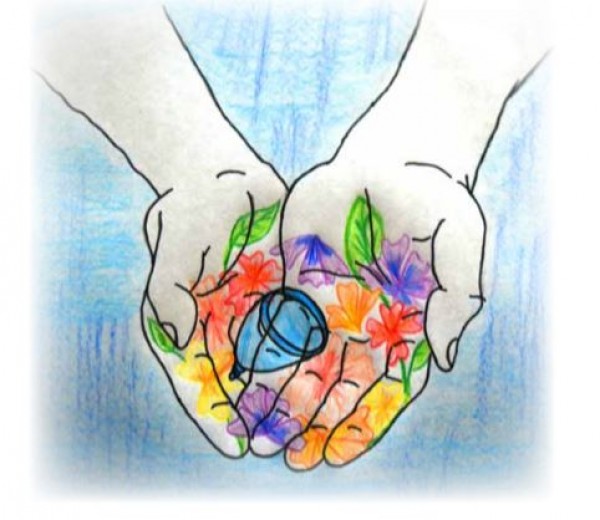 Connecting with menstruation through the cup

During their lifetime a menstruating person will use and throw away approximately 11,000 pads and tampons. These pads and tampons come wrapped in pink plastic wrappers, accompanied by plastic applicators and are disposed of in plastic bags for ‘hygiene’ and ‘dignity.’ In the face of global environmental crisis and growing consciousness about the lives of plastic waste and its threats to flora and fauna, some women in La Paz are considering an alternative to pads and tampons: menstrual cups.

In some ways, Bolivia is a relatively conservative society with a persistent taboo on menstruation making it difficult to find any data on usa. Menstrual cups are not widely used in Bolivia, with the majority of women and people who menstruate using generic pads and tampons. The cup can seem like a weird object to many who have used pads their entire lives, as well as the daunting prospect of getting up close and personal with one’s genitalia. The women who have begun using the cup are therefore mostly young and living in urban areas but are passionate about its potentials. And despite these cultural and logistic there is a new community of Bolivian cup enthusiasts importing cups and spreading information.

Menstrual cups sit inside the vagina creating a vacuum to collect blood and prevent leaking, and they can be worn for up to 12 hours at a time. At the end of the period, the cup is washed and sterilised and ready to use again the next month. The cups provide a reusable solution to menstrual management that Renata Lazcano, who imports cups into Bolivia, is incredibly enthusiastic about. Having become attracted to the product as a way to reduce waste and save money she found that using the cup has improved her relationship to her body and her period. ‘It was always something uncomfortable, I worried about leaks and smells,’ she says. ‘But since using the cup I have started to celebrate my period.’ Using the cup has fed a passion for discovering more about periods and the cycles that her body goes through; she started noticing changes in colours and textures in her blood that she has previously ignored. She has even experimented with feeding the blood to her plants engaging with indigenous Bolivian beliefs about the particularly strong connections that women have to the earth through their relationship to Pachamama. For Lazcano, what began as a way to reduce her plastic footprint became a way to connect with her body, and doing away with the discomfort of pads revealed a new path to menstrual knowledge. She is passionate about talking to others about the benefits of the cup.

"Bolivia is a relatively conservative society with a persistent taboo on menstruation."

Lazcano began to import menstrual cups from Chile because she wanted to share her experience with other women and girls and make alternatives to disposable products available in Bolivia. The environmental and physiological impacts of disposables sold in Bolivia, many of which contain chemicals which give the pads particular scents and textures are of huge concern to her. For example, a 2013 report by the Women’s Voices for the Earth entitled ‘ChemFatale’, a New York–based organisation, revealed that the synthetic fragrances in pads can contain carcinogens, allergens, irritants and endocrine-disrupting chemicals. Whilst these chemicals are usually found in micro-amounts, the absorbency of the vagina is a cause for concern by those who use these products every month.

Flavia Orozco is an avid user of the cup who, like Lazcano, first heard about it on social media and had animated conversations with friends who used it before becoming a convert herself. She chatted animatedly about the need to smash the menstrual taboo in Bolivia and her faith in the ability of young women to do so. Lazcano echoes these desires with plans to improve sexual health education for girls in La Paz by going into schools to teach them about menstrual cups and their bodies. Orozco thinks that the fires which have burned 4.2 million wild acres in the Bolivian Amazon are motivating more young Bolivians to consider their own personal impact on the planet as well as pressuring their government to act; ‘We have responsibility in the cities for the environmental disaster, with social media it is harder to ignore these facts,’ she says. Her close friend and fellow cup user Irma Zegarra combines her activism attempting to save the Amazon and promoting cup use amongst her friends. Orozco explicitly linked reducing other plastic waste, such as plastic bags. ‘I no longer use plastic bags, but they are everywhere,’ she says.

‘We have the potential to change things by talking to each other.’

Social media is a huge factor in changing the way that young Bolivian women are thinking about and managing their periods because the freedom to share information online is beginning to break down centuries old taboos. For example Warmi Yasi, a group of feminists in Bolivia, create posts on Facebook designed to inform young women about menstrual cups and other eco-friendly lifestyle initiatives. Whilst changing one’s monthly habits might seem like a small effort against the tide of climate change and the oppressive silence around women’s health, these Bolivian women are taking collective positive action to try and improve the lives of girls who come after them. Lazcano has found very positive reception from potential clients and friends, and the opening up of conversation about menstruation draws people’s curiosity even when they are apprehensive of the cup itself. Orozco is particularly optimistic, expressing that ‘we are not just individuals, we are a group and we have the potential to change things by talking to each other.’