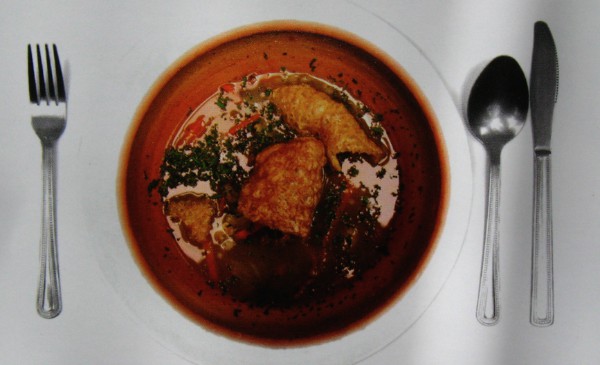 Gabriela (the Bolivian Express’s favourite Swede – not the vegetable, mind you) hates to cook, but on a whim decided to go on a cooking class and invited some of us to come along. Over the next few months, the Bolivian Express will publish recipes for each of the meals we cooked, along with a few interesting facts.

Having no idea where the class would take place, I obediently followed Gabriela to our final destination: the Instituto Don Bosco. It’s not the sort of building where you’d expect to find a fully equipped kitchen: the halls are tiny and dark, and the paint is gently peeling off the walls. However, opening the flimsy wooden door, we found ourselves in a vast, industrial-looking kitchen. Here could be found everything under the (culinary) sun: five heavy-duty ovens, pressure-cookers, many large pots and pans, plastic measuring cups, three wooden church benches and three long metal tables, to name a few. One of these tables was piled with all the ingredients we would need; time for the class to begin.

CHAIRO Recipe of the month: Chairo. ‘Chairo’ means ‘soup’ in Aymara, and it’s a meat and vegetable stew typical of La Paz. Originally developed by campesinos working far from home, chairo contains Andean vegetables such as chuño and is flavoured with oregano and hierba buena, an indigenous variety of mint. Chuños are freeze-dried potatoes laboriously produced following an ancient pre-Inca process, and originally found at Tiwanaku. Potatoes are left outside at night to freeze then exposed to intense sunlight and trampled to remove the water. (Unfortunately we make no promises that no chuños were harmed in the making of this stew).

PREPARATION Boil two litres of water, and once it’s boiling add the meat, chalona, vegeta- bles, herbs and wheat. Let it cook for an hour or more. If a lot of water evapo- rates add more.

Once the meat is done add the salt and the grated chuño. Once this is cooked add the potatoes and the mote. Serve with a large spoonful of finely chopped parsley and mint on top. You can also add some chicharron de cerdo if it suits!