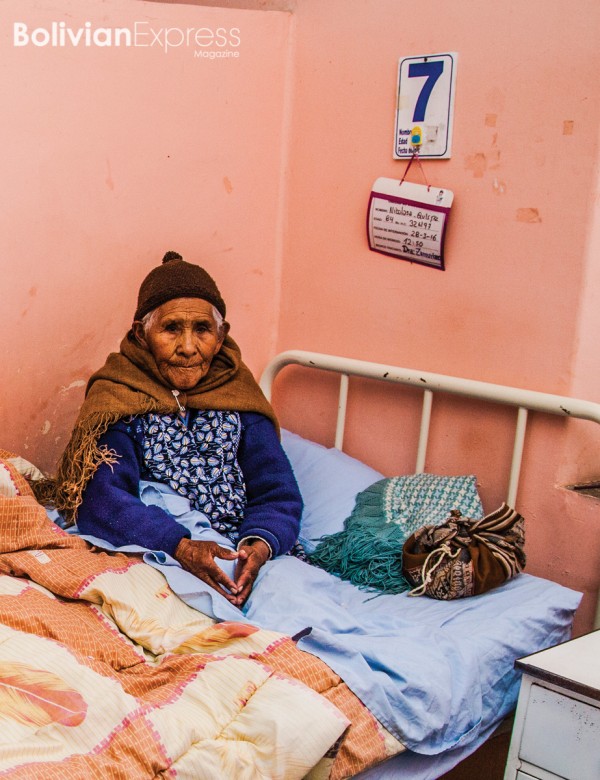 Nicolasa, an 84-year-old widow, says that she moved to Pucarani – a community 55 kilometres from La Paz – after getting married. The passing of time would see her witness all of her children leaving in the search of better opportunities, as well as the death of her husband, leaving her all alone to tackle the duties of working the fields and raising the cattle in her rural dwelling. One day, the pain she felt grew unbearable. Nevertheless, the posta de salud of her village was neither able to diagnose the affliction nor heal her. Luckily, being over 60 entitled her to free medical treatment, so when referred to a clinic in La Paz, the only barriers she needed to overcome were the costs of travelling to the city and waiting for a hospital bed to become available. When she finally saw a doctor, the diagnosis was made: Nicolasa had cervical cancer.

According to the the Bolivian government Health Ministry, by 2010 almost five Bolivian women were dying everyday because of cervical cancer. This staggering figure did drop slightly in 2013, according to the Pan-American Health Organisation, to two women per day. But these deaths are almost all preventable, as cervical cancer is usually caused by the human papillomavirus (HPV). HPV is transmitted sexually and presents no symptoms – except for certain strains that cause genital warts. Like many other countries, Bolivia has a vaccination program that combats the infection and spread of four different strains of HPV – between 2009 and 2011, an average of 28.000 Bolivian girls were vaccinated every year. But there has been no free, state-sponsored vaccination campaign since. (Currently, the HPV vaccine can be bought privately for around US$300 – more than the national monthly minimum wage.) However, HPV and cervical cancer can be treated when detected early by Pap tests, which are provided for free in public health centres. Nevertheless, only 14 percent of Bolivian women that took the test in 2010.

After Nicolasa was diagnosed, she was placed in the hospital’s 14-bed room. Chemotherapy, blood transfusions and several other tests and medications quickly followed. Her son did not stay for long, and she was left alone in the hospital bed, waiting for the treatment to end. Unfortunately, Nicolasa’s plight isn’t unusual, one of the main reasons being that cervical cancer is rarely caught in its early stages, when less invasive and more efficacious treatment is possible. In most rural communities in Bolivia, postas sanitarias are the only medical resources, and Pap tests are not regularly included in routine checkups. Furthermore, conservative rural communities frequently shun discussions of female sexuality and sexual health. Some doctors report that husbands forbid their wives from seeing medical professionals. The combination of shame, fear and ignorance contribute to HPV’s deadly toll.

Making matters worse, Bolivia has only three public hospitals to treat cancer, according to Ana Carola Torres of the Association of Volunteers Against Child Cancer, all of them located in the central axis of the country: Hospital de Clínicas in La Paz, Hospital Viedma in Cochabamba and Hospital Oncológico in Santa Cruz. Additionally, Torres says that these medical centres often lack of the proper equipment and infrastructure for treatment. For example, cobalt radiotherapy machines – an outdated technology from 50 years ago – are still in service. These conditions would prove daunting to a relatively sophisticated cosmopolite from La Paz, let alone a poor, uneducated woman from the countryside.

However trying Nicolasa’s story is, the scenario gets worse for women who live in even more remote communities, where logistics prevent any commute to one of the three public hospitals in the far-flung metropolis. And, with no free national medical insurance for women younger than 60, a bed, blood transfusions and chemotherapy can easily cost tens of thousands of dollars.

Nicolasa’s story is but one of many, her plight highlighting the challenges that cervical cancer poses to many in rural Bolivia. But Nicolasa, as difficult as her story is, is one of the fortunate ones. Cervical cancer has proven itself to be a silent and deadly killer amongst many other women from the Bolivian countryside – one that is treatable and preventable. There is room for improvement, but Bolivia faces an uphill struggle. The public healthcare system is not properly equipped to provide timely diagnosis and treatment, which can prevent or ameliorate the deadly effects of cervical cancer. Women need to be informed, empowered and encouraged to demand their rights and own their bodies. And the state needs to respond to these demands and provide rural women the healthcare and medical infrastructure they deserve.