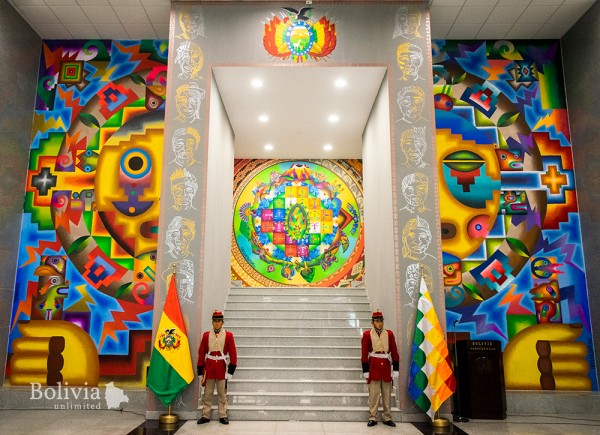 Controversy and art inside the new government building

Visible from any point across the skyline of La Paz, Bolivia’s new presidential building, the Casa Grande del Pueblo, looms over the historic Plaza Murillo, cutting through the traditional and colourful architecture of the surrounding government buildings. The question on everyone’s mind, however, is whether this novel structure of 29 floors can really be a house of the people when the people don’t know much about it.

At present, to the disappointment of paceños and tourists alike, if one approaches the ‘Great House of the People’ at any time other than the short visiting hours on Saturday, one is greeted at each door by a soldier announcing one cannot enter.

Although the Saturday morning tours seem a reasonable way to reveal the building to the public, visitors are left wanting more after partaking in them. Queueing from 8:30am, visitors are allowed through a side entrance of the building in groups of ten. After passing through security, they are taken to the rooftop helipad and granted five minutes to take photos. They then descend to the third, second and first floor to view a sparse, but impressive collection of artwork. There is little clarity throughout the tour and no consistent guide to escort the groups of tourists.

Alexandra Bravo, one of the artists featured in the collection, was present to speak briefly about her work with real life feathers that addresses issues linked with immigration within Bolivia and discusses human and women’s rights. In the lobby of the building there is a colourful tribute to Pachamama created by the highly acclaimed Bolivian artist Roberto Mamani Mamani. Angela Pachawte, one of the visitors on the tours, expressed her deep appreciation for the atwork in the Casa Grande del Pueblo, confessing she would like to see more of that art around the city.

La Casa Grande del Pueblo will replace Bolivia’s former presidential palace, but there are clear distinctions between the two. 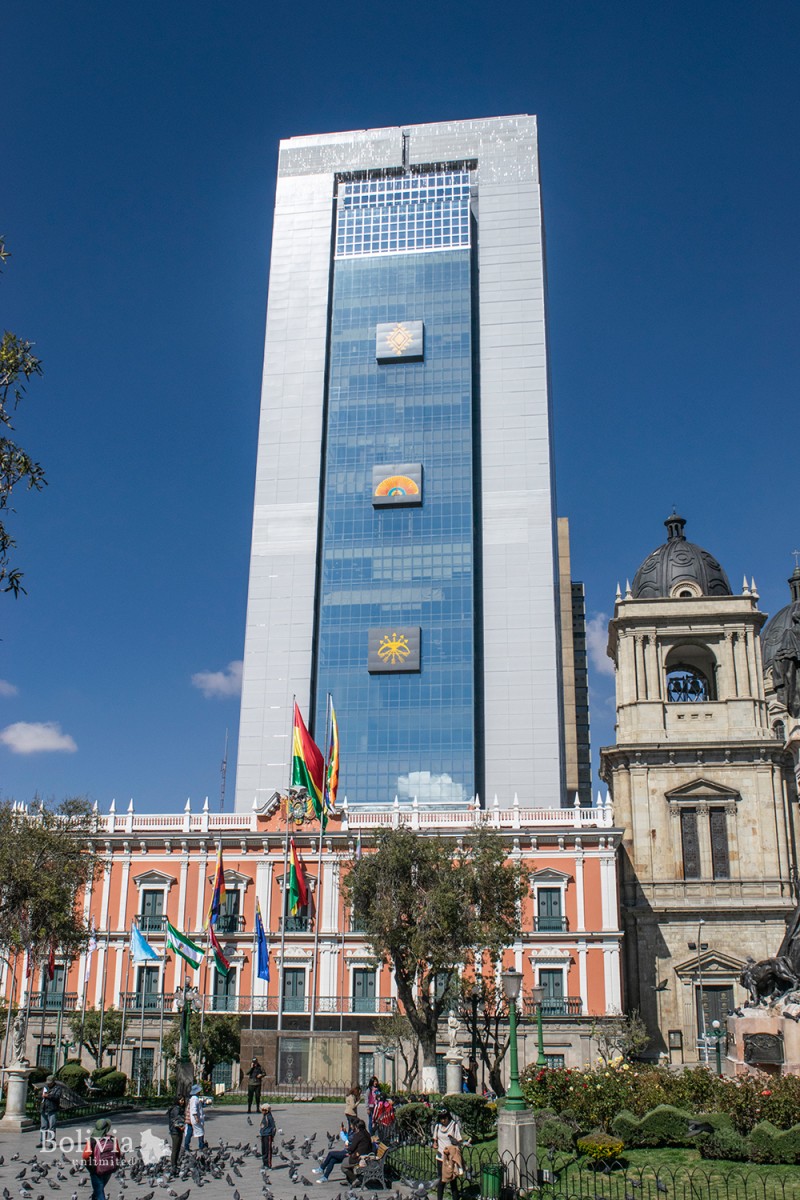 The tours focus more on the art and the facade of the building, than on the actual use of this new government structure. Although La Casa Grande del Pueblo will replace Bolivia’s former presidential palace, called the Palacio Quemado, there are clear distinctions between the two.  The Palacio Quemado, which is now set to become a museum, only permitted the entrance of people in suits and formal attire and was closed to the public. Although La Casa Grande del Pueblo was going to have the same policy at first, President Evo Morales decided to create permanent exhibition rooms that are open to the public, with the hope that the building will become a cultural hub in Bolivia. He presented the building on Twitter as evidence of ‘the change and renovation of the new Bolivia we are constructing.’

The helipad that crowns the building was created for the additional use of wedding photos and ceremonies to make the structure more accessible to the public, but the conditions of this accessibility have not been confirmed. The same goes for the nature of the tours. Ivan Ayaviri, a communications officer of the Ministry of Culture and Tourism who now works on the 19th floor of the building with a spectacular view over the south side of the city, informs us that the  visiting schedule will likely change in the coming months.

Ayaviri discussed the artwork both inside and outside La Casa del Pueblo, indicating ‘the union of Bolivia’s three climatic zones’, the Andes, the valleys and the lowlands, depicted in the three icons on each face of the building. He also described the 36 faces painted over the archway of the spectacular lobby, which represent the 36 indigenous groups of Bolivia recognised by the constitution, each divided with a half male, half female face.

Aside from the artwork inside the building, the official use of the structure has been a point of contention.

Aside from this artwork, the official use of the building has been a point of contention. According to Ayaviri, Bolivia’s ‘growing economy’, demands more space for the government. The skyscraper not only houses the Presidential Suite, but also parts of at least five government ministries: Presidential, Communication, Culture and Tourism, Energy, and Environment and Water. The offices of most of these ministries are split between La Casa del Pueblo and offices around La Paz. Citizens, however, have contrasting opinions on this way of organizing the nation’s bureaucracy.

‘The ministries are a little displaced,’ said Angela Pachawte, adding that it would be better if they all worked under the same roof to facilitate public access. In opposition to this view, Carlos Arispe, a language teacher working in La Paz, believes ‘a government needs to decentralise. It needs to work in different areas, not only in one large place,’ he said.

A highly controversial element of La Casa del Pueblo was the use of public funds for such an extravagant construction. Arispe describes the lack of ‘hospitals and medical centres to address the health of the people’ in La Paz, which he says is noticeable given the ‘supposedly socialist’ nature of the government, and the ‘immediate visible needs’ around the city. Pachawte points out that, despite her appreciation of the building’s use and the artwork it contains, La Paz is ‘seriously lacking health and education services’ for young people like her. Williams Madrano Cuiza, however, who is a Bolivian from Tarija, claims that the government is building hospitals, but due to a ‘lack of communication’ in the media, this is not made obvious to the public.

Other residents of La Paz, like Carlos Arispe, display a distaste for the building and describe it as ‘an absolute waste of money… a demonstration of the government’s power and economic control.’ Regardless of these opposing views,  Williams Madrano and points out that ‘when Evo Morales leaves the government, the building will stay in the city.’ This sobering insight gives room for thought. La Casa del Pueblo will indeed be part of La Paz’ skyline for a long time to come, so why not embrace it as the cultural hub that it is intended to become?