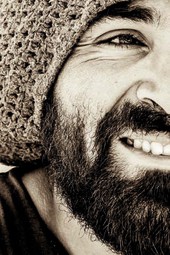 'Sometimes its sells, sometimes it doesn’t', he tells me with an easy smile.

It began as just a hobby for Luis Aerrere. He got into artisan crafts such as wood carving and jewelry when his older friends showed him how, and later discovered he really liked it. He realised that instead of just using his leisure time to create art he could sell his creations and earn a living. At fifteen Luis left his job as a phone receptionist. When he was seventeen he began traveling locally while making his art and by twenty years old he was selling it for a living.

'Freedom,' is what drove Luis to leave his old job. The combination of his artistic talent and his enjoyment for the activity gave him the perfect conclusion to quit. 'I am the owner of myself, my time, and my life. Total independence'.

He used to sell his crafts at the Monte Grande fair in Great Buenos Aires until last year, when he left to travel South America. He initially wanted to go to Venezuela but only made it up to Ecuador due to family problems. On his way back home Luis decided to stop by Bolivia for a while. 'I like the food, the landscape, and the house structures—they look old fashioned. The people are very sociable, kind, and gentle. They are also respectful. I also like how the people pronounce words here.'

Luis spends his days selling and making his art. 'Sometimes its sells, sometimes it doesn’t', he tells me with an easy smile. A perk of the job is getting to talk to people from all over the world. While we were talking a few Brazilians walked up to Luis and his friends and asked if they were also from Brazil.

Luis is friends with a couple, plus their two kids, ages eight and fifteen. They met seven years ago at a hostel in Argentina. Luis calls the couple and their children his family. They have been traveling and selling their artwork for a living for the past two years. 'We can support the family with crafts', he tells me. This very unique family currently lives in a hotel in La Paz. The kids are learning the trade and are currently specialising in making bracelets. As for schooling, Luis says, 'Children can study any place in the world'.

This kind of nomadic life has taught Luis to value the small things that most people usually take for granted. 'For example, if you only have money for one coffee you are thankful for this whereas others might want more than this.' According to Luis, structured jobs don’t leave room for gleaning such insights from life. Now that he sees things differently he values his freedom immensely. 'If someday I don’t feel like working I don’t have to. I love to live my life from making art.'