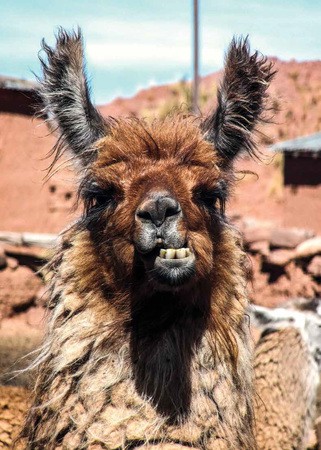 The corral of llamas gazed haughtily at me. Their jaws chewed side-to-side, a short row of buckteeth jutting out to form an overall aura of aloof heartiness. I had come to this remote llama farm in the dry unforgiving plains of the Altiplano to learn about the history of llama meat consumption, and these llamas weren’t about to give this gringo any love. Maybe they could tell I was thinking about the delicious llama filet I had eaten the week before.

Luckily, two equally hardy but much less haughty women arrived, welcoming us with toothy smiles and wind-weathered wrinkly cheeks. After receiving our gift of a generously sized bag of coca leaves they explained that Bolivia’s history of llama husbandry and consumption stretches back to ancient indigenous Aymara and Quechua communities who took advantage of the animal’s adaptability to harsh high altitude conditions.

Raising llamas in their natural habitat meant that their daily, meandering, nibbling stroll through the countryside provided their breakfast, lunch and dinner. Today, llama farms still dot the landscape of the otherwise sparse Altiplano, although with decreasing frequency and size.

'Two or three families may use this llama corral', explains one of them. 'We grow them for our own use, although sometimes we sell some to city merchants if they come offering to buy and we need the money.'

While life in the Altiplano remains relatively unchanged for these small llama farms, the dynamics of the commercial llama meat industry have been changing over recent years. The fact that 'city people' would venture to the mountain plains for a llama purchase is a testament to this changing environment and also to the fledgling nature of an industry with limited commercial infrastructure.

The success of Mateo Laura’s business, Mayken —which is one of, if not the only, company in Bolivia that makes llama sausages— relies for better or for worse on this shaky infrastructure. Back in the busy bustle of La Paz, I met with Laura, a man of Aymara descent whose family has worked on llama farms for generations.

While raising llamas was a simple necessity of life in the plains of the Altiplano for centuries, for Laura’s present-day business, bringing the meat into commercial production has been a challenging process. 'We’ve had many difficulties trying to maintain our business. There is always a lack of capital, which makes important things like product distribution very difficult to manage.'

He continued, 'We need to get more marketing experts involved in order to spread knowledge of llama meat’s nutritional characteristics, and to generate more acceptance of its consumption'. Apparently, llama meat is low in fat and cholesterol, and high in protein — in light of these characteristics it is perhaps one of the healthiest available on the menu of world meats.

Most budding businesses experience growing pains, but why has it been so hard to succeed within a country that has been eating llama meat for centuries? The truth is that culinary llama adaptations available in restaurants, hotels and cafés don’t tempt the taste buds of most Bolivians. In our discussion about product distribution Laura made an interesting point, 'We distribute mostly to places like hotels, locations with many foreigners.'

So the majority of llama meat isn’t consumed by Bolivians. Instead, it is eagerly thrust down the gullet of gullible tourists like myself. Aside from its obvious exotic attraction as a meat not widely available elsewhere, it offers what foreigners like me believe is a window into la vida boliviana. After all, aren’t all Bolivians as excited about a llama carpaccio as I am? Apparently not.

One restaurant owner in La Paz tells me that the meat’s cultural role in society is perhaps the main reason for this local aversion to its consumption. He also tells me that’s exactly why he came to the city to make and sell traditional llama meat dishes.

On a busy street in Miraflores, the signs outside Edwin Mamani’s restaurant 'El Fogón' boast charquekan orureño for only 15 bolivianos. Dried and shredded, this is a traditional way to prepare and serve llama meat. Mamani explains his decision to open a restaurant here: 'I studied the market in this area and realized there is little to no charquekan, there was great economic incentive to open a restaurant'. Given the cultural history of the meat he was about to share with me, this was also a very risky business decision.

After he had piled the shredded meat onto a plate for me, I sat there in my fake alpaca wool sweater decorated with cheeky llamas and ate his truly authentic Bolivian dish, listening as he explained its history.

'Charquekan’s origins lie in mining communities. The miners took coca and food with them into the mines for long shifts and their wives prepared the llama meat – which is a tough meat and was very cheap – in this way so it would last a long time.'

For this reason, like quinoa, llama meat’s historical reputation is one of a food for the poor, for country folk. Today, Mamani explains that, unlike quinoa, it is still the middle and lower classes that eat charquekan in Oruro, but that here in La Paz people from a broader range of socioeconomic levels are becoming acquainted with the dish and are becoming better educated about the nutritional qualities of llama meat.

On the llama farm in the Altiplano, I thought about the future of this industry. Llamas are incredibly durable creatures, but would consumption of their meat also endure on a commercial scale? Or, like the foreigners that flock to dine on llama dishes in the cities, is this a product that is simply out of place in such an environment?

The llamas offered no hints through their bucktoothed gyrations and steady stares. Mamani is more optimistic about what lies ahead, 'In the future, it will be a dish for everyone, all classes. Everyone will eat it.'