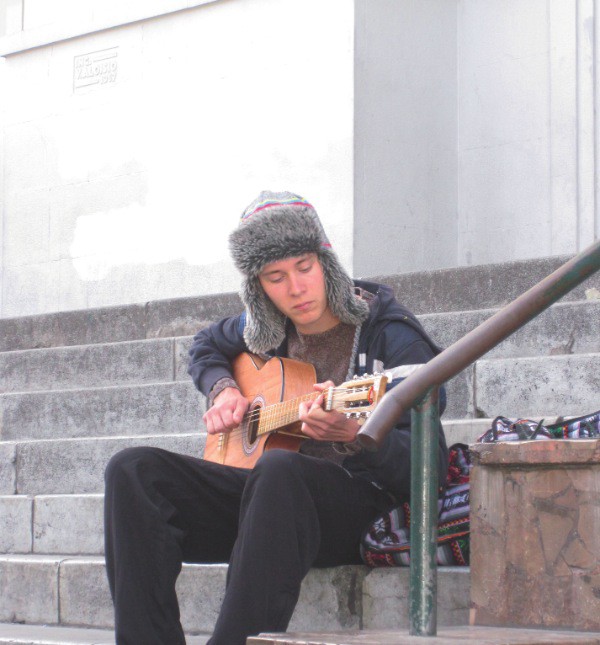 Going into the heart of La Paz with the sun beaming down upon me and my guitar on my back, dressed down in order not to look too much like a tourist, I was filled with a great apprehension. In Europe or America buskers are commonplace but in La Paz you can count the amount of buskers that you see in a day on one hand. I had a brief conversation with one of these rare Bolivian buskers in the Mercado and he seemed optimistic enough. “It’s not as big here as in Europe”, he told me, “but you can get enough to eat from it”. This optimism seemed odd for if such gains are attainable, then surely there would be more buskers. Thus, I took my guitar out from the case that I had recently bought from the witches’ market and began with quite some intrigue. I was very curious about how the Bolivian public would receive a gringo busker and I was interested as to whether I would be able to buy lunch with my earnings after two hours of busking.

I took my place on the steps outside the Basilica Maria Auxiliadora, a tall white building which looked down on the city as though from the heavens, and began to play amid the gentle hubbub of city life. I chose this place as the noise of the traffic did not overpower my guitar and there was a constant stream of pedestrians passing by. Also, I was hoping that the sight of a church may provoke some strange irrational generosity in my audience. At first it seemed as though I was playing outside a tourist convention such was the perturbation of the passersby. The looks of utter disdain that were steered towards me initially eroded my optimism and the first five or ten minutes seemed like an eternity. I was playing some kind of strange concoction of funky riffs in order to establish to the people that I might actually be quite good at the guitar. Initially this didn’t seem to pay off but when the first coins were dropped into my little white pot, the optimism began once more to flow through my plucking fingers. The fact that the first contribution (five bolivianos!) was from a fairly nice looking young lady, who then wished me luck for the rest of the day, gave me a real urge of confidence.

More people started to contribute including some jolly old men and some mesmerised young children. There was one young girl in particular who passed by on a number of occasions, each time stopping to watch. She, however, was too poor to give any money for she herself was carrying a bucket hoping for donations. I therefore decided to give her a couple of my bolivianos as a thank you for her attentive listening. After two hours I had amassed thirty one bolivianos and fifty centavos, despite my donation to the girl, and having packed my guitar I went to ‘Toby’s Chicken’ where indeed I was able to buy myself a meal with plenty dineros to spare. The two hours I was there busking were therefore successful and I was feeling pretty happy with myself.

Yet, as I sat there eating my hard earned chicken nuggets, I was in a reflective mood. When you look at the poverty and desperation etched into the faces of some of the people here in La Paz, you have to wonder why there are not more street performers. Obviously a lot of these people do not have the skills to do this, but in a city of millions of people you’d think there’d be some sort of busking presence - this is especially the case when you consider the vibrancy and musicality of Bolivian people. However, that there is not the same culture for busking as there is in Europe is not too surprising. Seeing people on the streets and in the markets, one realises that there is far more of a salesmen culture here – the vast stretches of markets, the stall on every corner and the food trolleys taken around the spectators at the football screens, Bolivians will take to selling should they not possess a ‘normal’ job. While this salesmanship does not stifle music (the country is a very musical one of course, as shown by the generosity of pedestrians towards my efforts), it may be the case that it does stifle busking. The streets are filled with vendors, leaving not too much room for the street performers that we are so used to seeing back home.

Thus, as I left Toby’s with my guitar on my back and my change in my pot, I left satisfied that the market busker’s optimism was more than vindicated and my stomach was indeed replete with this vindication.