Building the Houses of God 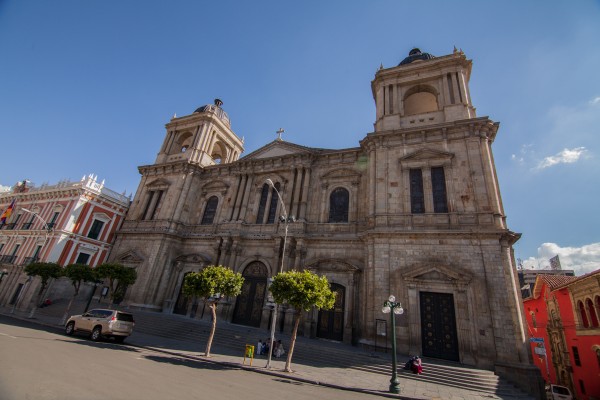 It seems almost every corner of La Paz is home to a church. An interview with Gastón A. Gallardo, Dean of Architecture at Universidad Mayor de San Andrés, opens my eyes to the history and design behind these incredible structures.

Description: On entering this church, the building seems strangely long and thin, a feature it retains from its Renaissance origins. The original church no longer stands, as it was burned down during an indigenous rebellion known as the siege of Túpac Katari. Perhaps the people who frequent the church are what gives it its charm. As I approached the building, I was greeted by a vivacious wedding scene, with a happy couple dancing to a full orchestra that included three guitars.

Description: You can’t help but notice the gloom as you enter this magnificent church. Along the side walls, where windows would normally sit, are the statues of countless Saints. The façade has a particularly impressive design, so intricate that the more you look the more you see. In a style is known as Mestizo-Baroque, it features bunches of grapes and grotesque humanoid faces that appear to spew vines from their mouths. Like in the case of San Pedro, the original San Francisco church no longer stands. Its original building is often cited as the oldest church in the city, but it was destroyed by severe snowfalls.

Description: Fresh flowers and plaques of gratitude adorn the various Saints that line the walls of this church. Its exterior appearance, however, which is a twentieth century addition, does not give such a welcoming impression, with its discoloured plaster peeling from the walls and panels missing from the windows. This building is the only complete example of seventeenth century architecture in La Paz.

Date completed: Second half of the seventeenth century, main stone façade around 1760

Architect: the project was conceived by Francisco Jiménez de Sigüenza in 1609, the engineer Lanza remodelled the interior in the nineteenth century

Description: The partially crumbling exterior of this church lends a certain authenticity to its seventeenth-century construction. As you walk through the gates, you are greeted by ladies selling beautiful jewellery and candles. The decoration of the main stone façade, with its various parrots, grape vines and pomegranates, is in typical Mestizo style, based around the motifs of tropical flora and fauna. The inside of the church is particularly attractive, though it’s hard to pinpoint why. Perhaps it is the small organ placed proudly at the front, or maybe the vertical red and gold lines, decorating the pillars.

Date completed: Inaugurated in 1925. It has been continually adapted, most recently in 1989 when the two towers were built.

Architect: Many architects and engineers intervened, but the original design was created by Manuel Sanahuja

Description: ‘It’s unbelievable,’ Dean Gallardo tells me, outraged. ‘The towers were supposed to be taller [than the dome], but they made them from a single floor because of a lack of funding.’ To the untrained eye, this architectural shortcoming does not detract from the Catedral Metropolitana. Its beautiful stone pillars and huge doors are so artfully sculpted, that their engraved metal figures seem to come right out of their alcoves, forcing emotions onto the innocent passerby. The stained-glass window at the back depicts a group of people praying and a great light shining from angels in the sky. It strikes me at first that the people in prayer are all white-skinned, yet it is no surprise: the window was, after all, imported from Spain by the Europeans.

Description: I nearly walked past this interesting building because I was expecting to find a traditional stone church. Though very small, what I found makes up for its size with its unique character. With lumps and bumps and a cross that appears to be hanging in mid-air, this irregular structure is coloured simply with white and turquoise. Inside, the most distinctive feature is a set of cylindrical lights built into the ceiling. One has the outline of a dove, the other of Jesus. This church was nothing like what I had expected, but I was captivated by its unconventional design.