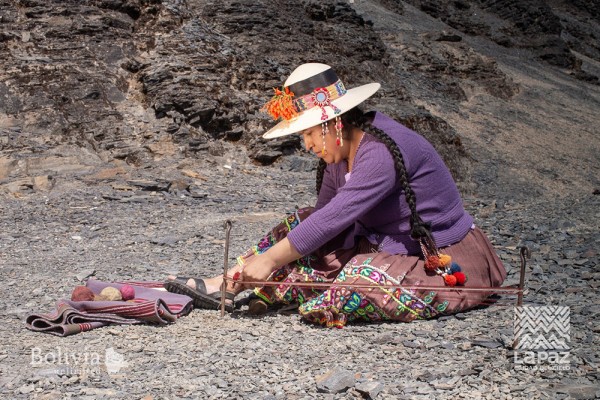 The Arts, Lifestyle and Indigeneity

Aymara artist, weaver, narrator of oral tradition, documentarian, poet, singer, writer and curator of La Paz’s National Museum of Ethnography and Folklore (MUSEF), Elvira Espejo Ayca is breaking boundaries in a once male-dominated country. She is paving new ways of reuniting rich indigenous traditions with contemporary Bolivia. Born in a rural altiplano community near Oruro, Espejo is a speaker of both Aymara and Quechua, in addition to Spanish, and her career has spanned the worlds of art, poetry, academia and music. It is a Thursday morning when I speak with her, and she sits before me in her office, calm and smiling warmly, with a purple scarf hanging over her shoulder.

Espejo begins by contextualising the inspiration behind her multifaceted career. ‘I thought of myself as an artist, and wanted to study arts because I have always been attracted to paintings,’ she says. ‘But then I found poetry when I heard a Japanese poet speak about haikus and the structure of their verses. I was really surprised by how similar it was to the things we did.’ Since that moment Espejo has been writing poetry about her community and her religion in Aymara and Quechua.

Espejo says her work is inspired by the contrasting experiences of rural and urban life. When she was 14 years old, she left her home village of Ayllu Qaqachaka to finish her high-school studies in the town of Challapata. She then studied in La Paz at the Academy of Fine Arts. Returning to Ayllu Qaqachaka to do research for her book, she spurned the big-city lifestyle she had come to know – for the time being at least. ‘In those days, Bolivia had difficulties surrounding promoting its culture,’ Espejo says. ‘So I decided to return to my town, and people were very surprised because they had never seen a fighting woman. They thought they lost me when I went to the city, but I came back.’ The immense contradictions between the city and the countryside have been an underlying theme in her art and research, an exploration of what it means to be Bolivian today. As a researcher of Bolivian art, Espejo tries to deepen the connection between tradition and the modern world, as a way of linking cultural history to the future. As an Aymara woman, Espejo’s work is also a part of the process of decolonisation in Bolivia, moving further towards a plurinacional country not just politically but culturally and socially.

Espejo tries to deepen the connection between tradition and the modern world, as a way of linking cultural history to the future.

In 2013, Espejo was appointed director of MUSEF, and since then she’s worked to reshape the way in which museums are curated, bringing ethnography, archaeology and ‘dead’ objects to life – such as those found in dusty corners of cupboards – as an integral part of how we can understand culture today. Espejo has focused on the weaving techniques found in rural communities, and the intimate and active relationships of the weavers to the fabrics displayed in the museum. ‘The museum used to ignore all of these factors and important parts [of small woven articles]; it only showed the big textiles, like ponchos and aguayos,’ rather than bringing attention to weaving techniques),’ she explains.

Espejo has published a book, El textil tridimensional: la naturaleza del tejido como objeto y como sujeto (The Three-Dimensional Textile: The Nature of the Fabric as an Object and as a subject), which catalogues the textile collection in the museum. In it, along with her co-author, anthropologist Denise Arnold, Espejo encourages us to think about objects, and textiles specifically, as more than static and one-dimensional, but as animate and enlivened. Rather than taking textile pieces at face value, Espejo and Arnold call on us to look more closely at them as products of a complex scientific and technological process that can provide extensive information about the cultures from which they originate.

Espejo’s studies in textiles is particularly relevant in the context of tourists shopping for cheap and colourful Bolivian fabrics to take home from their travels. Espejo explains that these textiles are mostly industrially produced, often imported from factories abroad. ‘In this industrial way, we are losing a dynamic, and the people of Bolivia won’t be able to reflect or think about the process of textiles.’ Something precious is lost if there are more demands for replicas than the legitimate versions of intricate textiles made by local Bolivian weavers.

In addition to her academic work, Espejo has branched out to the musical world, recently teaming up with musician Alvaro Montenegro. The duo has created a jazz-fusion piece called ‘Sonares Comunes’, which combines traditional Andean rhythms with contemporary urban sounds. This project reinforces Espejo’s efforts to collect knowledge and tradition in ways that counter the colonial written word. By fusing jazz with the rhythms of local communities, she strives to keep an oral history alive.

‘Art is everything and everywhere.’

Espejo is influencing the way in which art in all its forms acts as a gatekeeper between Bolivia’s diversity of tradition and the contemporary world. ‘Art is everything and everywhere,’ she says. ‘I see art like science, through the technology of the performers. It does not just need to be hung up in an exceptional gallery. I think art goes beyond, it depends on what you see. I think as a plurinacional state it would be nice to enlarge the fields of these societies and communities to have more understanding about this complex form of art of the past that we call archaeological objects.’