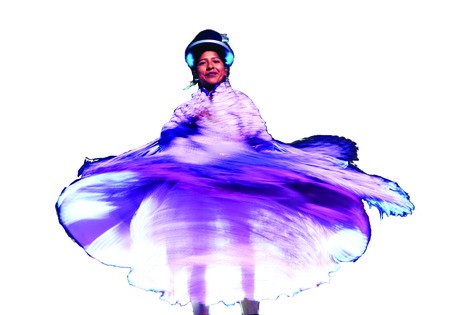 Concepts of belleza in modern Bolivia

The crowd gathers, huddling together, holding balloons and unlit fi recrackers in Plaza Alonso de Mendoza in La Paz. They are all anticipating the parading cholitas decked in polleras and mantas and topped with bowler hats. As the proceedings begin, the contestants dance down the runway twirling their brightly colored skirts, looking like spinning cake toppers. Each young woman gets her turn to bask in the spotlight, jewelry sparkling while she answers questions in Aymara about the traditions of La Paz. Some of the women speak timidly, barely audible even as the announcer tries to coax them to enunciate into the microphone. These are beauty queens in a distinct Bolivian version of the beauty pageant.

The Cholita Paceña pageant, sponsored by the city’s cultural committee, selects a mujer de pollera each year, the embodiment of the traditional indigenous notion of femininity. But there is something else brewing than just a typical parade of physical beauty. Gloria Campos Ramirez, a fresh-faced young woman whose family lineage is studded with Cholita Paceña competitors and whose perfect skin shows no signs of the hard work of selling fi sh in Mercado Camacho, says, ‘Cholita Paceña is not about beauty. It is a way to show off tradition and our artisan crafts.’ The fully clothed contestants – no swimsuit competition here – of varying body types emphasize indigenous culture and traditional dress instead of the sexualised ideals of typically Western notions of female beauty. Unlike the Miss Bolivia competition, where those norms of beauty dominate, here the announcer keeps on remarking that this is not solely about physical beauty, and characterises the women as students and vendors instead of objects to ogle. By forming a space for cholita pride and giving voice to the women, the pageant combats the notion of Andean women as silent and unseen figures.

The celebration of the cholita aesthetic – a standard of beauty originating from the lower classes – is itself, though, income-dependent. The cost of obtaining the latest fashions for cholita women, unfortunately, opposes the objective of making the Cholita Paceña pageant a place absent of discrimination. Behind the stage, nervous giggles fill the space, a girlish buzz that becomes even more coquettish as the contestants swarm to get their photos snapped in poses that emphasize the expensive glimmer of their accessories. As Campos reveals to me backstage, the opulent intricacy of the dresses becomes the focus. She, along with her mother, rave about the pearls lining her manta. Pablo Flores, the pageant supervisor, says that each costume can cost up to a couple thousand bolivianos, a huge investment for the average Bolivian. Although the pageant is a celebration of a once-marginalized class, forming a space for pride while giving voices to the women and breaking boundaries in a country with a peppered history of colonial and neo-colonial rule, class and income disparity still mark the competition.

The diversity of the competitors becomes washed away as the presenter’s commentary attempts to unify them into a single type of woman. During the interview segment, the contestants are asked about their studies, jobs (which usually consist of working at comedores or in the market) and their support of the current government of La Paz. The focus on the food they sell and cook becomes a tool for the announcer to captivate the audience and create comic relief: ‘¿Vamos con hambre, no?’ The cholita becomes a static type, valued for her handicrafts and ability to feed and reproduce. The contest belies its goal of giving voice to the women by reducing them to this archetype. The cholita becomes a nonevolving figure, at once celebrated but at the same time reduced to a function by the contest, which purports to support indigenous rights.

On the other hand, the globally recognized Bolivian models and beauty queens are born and raised mainly in Santa Cruz, in the eastern part of Bolivia. Santa Cruz has become the go-to place for discovering Miss Universe and Miss World contestants in Bolivia. The women selected are light-skinned, tall, and thin, with perfectly pert breasts and long, wavy brown or blonde hair. They are trained at a young age in various modeling schools, and they attempt to capture the more Western aesthetic of perfection. In selecting women that exemplify this image, Bolivia portrays itself on the world stage as equal, striving towards becoming a part of the modern ‘first world’. For example, on boliviafacts. net, there is a top 10 list of ‘Super Hot Bolivians’, which includes this description of the No. 1 rated female: ‘As you can see, her eyes drip with that legendary Latina lust while her voluptuous body is the manifestation of the American (wet) dream.’ As Andrew Canessa writes in his essay ‘Sex and the Citizen: Barbies and Beauty Queens in the Age of Evo Morales’, ‘Miss Bolivia resolves the paradox in a fantasy: the body of a white woman with the accessibility of an indian woman.’ These beauty queens are well aware of this as they don traditional native dress and simultaneously present themselves beneath all the feathers and textiles as beyond the dark roots of their ethnicity. In 2004, the then Miss Bolivia controversially said, ‘We are tall, and we are white people, and we know English.’ Similarly, the concept of an indigenous ‘authenticity’ affects Cholita Paceña competitors. ‘I am a genuine cholita,’ says Emiliana, a contestant in her mid-20s, at the edge of the stage, slightly out of breath from dancing. The weight of this statement makes itself known when placed in the context of July 2007, when the winner of Miss Cholita Paceña was found to be wearing fake plaits. (She was subsequently stripped of her crown.) Both notions of beauty, mutually incompatible, entangle women and fragment their identities, reducing them to fl at, polarized characters.

In viewing the impact of the fabrication of beauty in Bolivia, the cultural and social politics are refracted, imposed, and read through the female form. The image of the female in the colonial outlook on Latin America originates around miscegenation, the sexual taking of the Indian women by the European in order to create a mestizo race. The market for both images has found its place in Bolivia. The thirst for the exotic and preserved tradition is desirable for both tourists and Bolivians alike, but modern sensibility tends to demand the lithe lomitas on display in Santa Cruz.

Where a pageant merely reinforces the same timeworn standards of femininity in Bolivia, the stakes are higher every time a woman passes down the pasarela. Each movement and each response becomes charged with a way of envisioning the entire country and the woman’s position within this expansive landscape. Each woman in each contest embodies a way of viewing beauty through a historical lens that surrounds her, but these forces are not the only influences. These women also bring and receive their own individuality. As one demure Cholita Paceña contestant who studies law told me when asked why she participates in the pageant, ‘I feel like a person.’ Her timid smile afterward revealed a sense of elation for finally having the chance to portray herself publicly to an attentive audience. As the only woman in her class, and, furthermore, the only woman wearing a pollera in her class, she is familiar with the whims of a male-dominated space. Her invisibility and visibility – usually out of her control at school – is firmly in her hands when she is in her gold outfit chispeando under the hot lights. She constructs her own feminine ideal. Beauty pageants are spaces in which notions of femininity can be heard, seen and contested, in which each contestant can challenge or maintain her conception of it as the lens to view the understanding of the Bolivian nation.