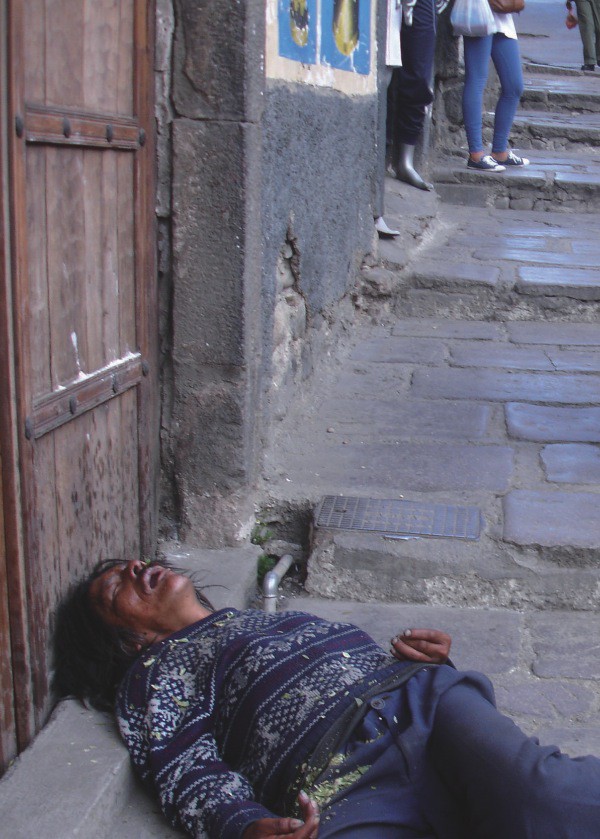 “El Cementerio de los elefantes” is a cross between a 1990´s B-Movie and a documentary by Louis Theroux. The budget comes across quite clearly with the quaint cinematography, Nollywood acting, and the rustic editing which could quite easily have been made using Window´s Movie Maker 1.5 Trial Version. However, as I was sitting in la Sala 3 of the Cinemateca, it struck me that this film was never going to be about Avatar-style effects or performances worthy of a Cannes award, but instead about the social content and the dizzying truth behind one man and his quest for redemption through intoxication. His story captures the uncertain reality of the thousands of Bolivians who suffer from alcoholism. I wanted to see the truth behind the film, but wasn´t aware that it is probably better not to kick the hornets’ nest.

According to urban legend, there are bars dotted about La Paz (four are still said to be in existance) where alcoholics who want to die come to drink themselves to death (much like elephants in the wild that, sensing their end is near, join a herd of other elephants on the brink of death). Bolivian author Victor Hugo Viscarra secularised this legend and is widely credited to have given this phenomenon its name.
It is in one of these bars that the protagonist Juvenal, 33 years old and an alcoholic since the age of 14, comes to die. His alcoholism leads him eventually to betray his blood-brother “El Tigre” during a drunken frenzy, offering him for ritual human sacrifice at a building’s construction site (forgot to mention, word has it that this is common practice in the construction world). I thus set out to investigate whether there were any fragments of truth among the superstitions and hearsay, leading me to seek out construction sites in La Paz to see what I could find.

The act of making an offering to the Pachamama in Bolivia is not uncommon. Whenever foundations are laid an act of violence is committed against Mother Earth: the earth is dug into causing her to bleed. This creates the necessity to heal and appease her. According to a yatiri that I spoke with on the Calle Santa Cruz (near the Sagárnaga), “the earth needs to eat just like you need to eat a fricase when you are hungry”. Small buildings will normally have a llama foetus or perhaps even a living llama buried underneath it along with a mesa containing small items and bits of grass called kora which is then burned. However, bigger buildings require bigger offerings.

Saturday, three o´clock in the afternoon and Jonnie Quisbert who is heading the construction of a new patio outside the Iglesia de Calacoto is initially taken aback by my questioning him about the myth. He says he knows it happens, but has never personally seen it. Every other site manager that I spoke to repeated this quasi mantra. Another man, however, was a little more open. “Of course it still happens. A layer of concrete is poured, then the victim is laid down and covered in another layer of cement. It happens at night, always at night. The yatiri comes in and does his business. We ask no questions.” My own questioning about the legality of it led to blank stares. After speaking to a few yatiris, one offered to perform such a sacrifice for 500Bs. Though I wanted to accept, deep down I felt that I shouldn’t.

As for the bars, initially I had the idea of visiting one to see if the reality behind the film is what it’s cracked up to be. But then, as I regained awareness that I was only a white, bespectacled, middle-class boy from England, it struck me that these places shouldn´t be disturbed. Every country has its own hornets’ nest and the sensible foreigner must respect that. However, if you do fancy a trip to Tembladerani, Munaypata or Rio Seco, we are told you may find a Cementerio de Elefantes there. Look out for metal jugs chained to the tables and drinks served by the bucket. Just make sure you don’t get locked in the “Suite Presidencial” (as Juvenal did in the film), lest this be your last visit to a bar. Once the patron hands you the bucket and locks the door to your room, the show is over.