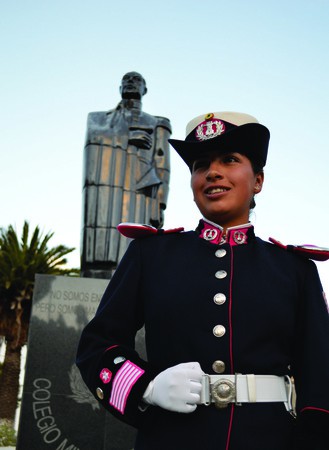 There is a strong tradition of powerful, militant women throughout the history of Bolivia. In times of conflict the fairer sex often took up position next to their male counterparts in battle. Bartolina Sisa, the wife of famed rebel Tupac Katari, was instrumental in the indigenous uprising of 1781, which held the Spanish forces in La Paz for 184 days. The patron saint of the armed forces is the figure of the Virgin del Carmen, whose annual festival celebrates the 1809 revolt against the Spanish in La Paz. More recently, Lidia Gueiler Tejada, the president of Bolivia from 1979 to 1980, battled against a right-wing military coup to try and maintain democracy. One of Bolivia’s more successful warrior women was Juana Azurduy de Padilla, who was born in what is now Sucre in 1780. Despite losing four children and her husband to the wars of independence, she continued to live a militant life and at the height of her power was in control of an army of roughly 6,000 men.

It is this remarkable figure who inspires Lia Yesenia, a 19-year-old student at the Colegio Militar in La Paz. In her third of four years, Yesenia is a dedicated and enthusiastic student who is clearly very proud of her decision to join up with the armed forces. Her father was in the army, and she explains that ‘it was through his military training that he learnt his moral code.’ Although this is still a largely male-dominated field, with roughly 100 female students to the 800 male students at the college, strides are being made to close this gap. Women have officially been part of the armed forces since 1981, but until recent years both political and practical obstacles hindered their absorption into the military. However, since 2008 measures have been taken to help ease the transition into this profession. Colonel Louis Anachuri, one of the leading figures at the Colegio Militar, explains how practical issues such as accommodations for women at the academy have been addressed in the past four years. The entry exams and physical and academic training at the academy are the same for men and women, although with some of the physical activities more is expected of the men. The only limitation recognised by the colonel is that of human nature, and he is keen to stress the value he places on his female students. Colonel Anachuri and Yesenia both agree that women’s representation in the military is essential. ‘It is very important,’ explains Yesenia, ‘as women can be a lot stronger than men. Not necessarily physically, but in certain exercises, such as parachuting, they are much better than men.’

The influence of militant women from the past can still be felt today, the legacy of Bartolina Sisa being one such example. The ‘Bartolina Sisa’ National Confederation of Indigenous Campesina Women of Bolivia is a leading organisation for indigenous women’s rights in Bolivia. Sisa’s name is also put to a variety of other modern creations, such as parks and radio stations. Despite her bloody end at the hands of the Spanish, who tortured her and mutilated her body before publicly hanging her, the repercussions of this warrior woman live on far beyond her death.

Exuding a quiet confidence, it is clear that Yesenia is a mature and capable young woman, thriving in a regimented and challenging environment. ‘Being in the military is more than just a job,’ she says, ‘it is part of who you are.’ However, despite the comfort in her surroundings, it is clear that she is entirely at the command of her male superiors. When asked what she considers the most important attributes of a cadet, Yesenia replies, ‘Submission, discipline and dedication.’ Her ambition is evident, and it is easy to imagine that her aspirations of becoming a specialist in her field, either in the cavalry or infantry, will be realised. Currently, however, the power structure in this institution is almost exclusively male, and it will take a number of years for there to be true equality in the Bolivian army.