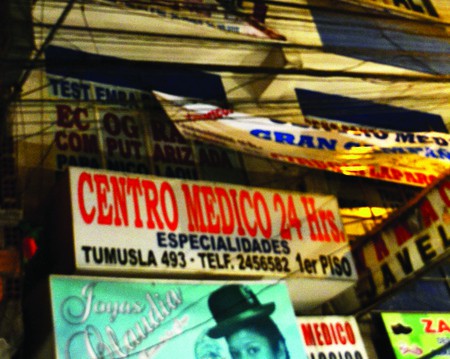 ‘You have to take control of your body and of the political body, where your body exists’

Behind rows of $1 Nike Tshirts, bootlegged Korean novellas and reheated street food, a sign saying Dentista guards the entrance to a small commercial centre. The grungy stairway to the office, though, suggests that the man in the white coat won’t be holding a toothbrush. Posters hide the waiting room walls: Jesus supervising a surgery, the heads of a mother and her child floating above brown hills, a cartoon of the female reproductive system, a chart stating the patient’s and the doctor’s rights, a young model with his index finger touching his mouth below red letters spelling Secreto. Behind the sliding doors, the doctor and receptionist consult in soft tones.

Bolivia may produce fifty thousand tons of coca leaves a year, but the most clandestine and most dangerous market is behind these doors: The patient is one of an estimated 100 to 250 women a day in Bolivia that receive an abortion. Estimated, because only women who seek public post-abortion care – who can’t afford safer private services, who have access to public clinics, who aren’t discouraged by social castigation – are recorded. The procedure itself is not in the books, as it is, and has always been, illegal.

The ‘dentist’ prescribes dental anesthesia, and one hour and 700 bolivianos – or 1,400 loaves of bread – later, the procedure is only a memory. In El Alto, a neighboring slum, a woman can negotiate with a partera (who aborts at home but has no training) down to 400 loaves of bread. At the witch’s market, a woman can purchase ingredients for an abortifacient (fi g leaves, oregano, seaweed) for maybe half that price. At home, a woman can self-operate (falling from heights, lifting weights, probing the uterus) for free. The ‘dentist’, like any good dentist (his gynaecologist certificates are still white), recommends the more expensive treatment for safety. He asks for written consent from the man and a blood type, and he will ‘take care of the rest’

For most women, ‘the rest’ is not cared for. A third of maternal deaths are caused by clandestine abortions, and, after Haiti, Bolivia has the highest maternal mortality rate in Latin America. The other common outcome of an unsafe abortion is an abnormal birth: a baby without an ear, with a pill on its forehead, with a disability. Again, most of the statistics are hidden.

Bolivia’s abortion rate, which is one of the highest in the world, is not a question of women’s empowerment. Rather, it is a question of machismo and conservatism. The drama begins with contraception. According to a new study by the reproductive rights organization Mary Stopes Bolivia, three in fi ve women have unprotected sex. The press and the church – ‘There has always been an obsession by the church against women’, says Teresa Lanza, director of Catholics for the Right to Decide Bolivia – blast their mistrust: condoms cause cancer, condom use is a sin. Many indigenous men, suspicious of Western medicine, see contraceptive use as a sign that their wives are adulterous. Misinformation or lack of information at home is reinforced at school – teachers that tackle sex education are often silenced by parents. Health centres often have condom shortages or don’t offer them at all – even STD clinics can’t supply enough. According to Alina Rueda, coordinator of sex workers in El Alto’s Center of Vigilance and Reference for STDs, men often refuse protection, and, desperate for work, women don’t insist upon safe sex. Rueda says about 20 percent of the sex workers she is in contact with have had an abortion.

While natural – but less effective – contraceptive methods have grown more popular in the past four years, adolescent pregnancies have increased. About half of Bolivian women have dealt with an unwanted pregnancy, according to the Mary Stopes Bolivia study. Unwanted, because rigid family models have no sympathy for the working single mother. ‘It’s important to note that there’s masculine abortion’, says Mary Stopes Bolivia director Ramiro Claure. He says the man who pressures, who abandons and who abuses can be the silent force behind the facts.

In the poorest South American country, money often speaks louder than spousal or parental influence. A mother of eight can’t afford to feed another mouth. A sex worker fears having her contract suspended. A student doesn’t want to drop out.

But according to Claure, the decision transcends class and even religion. Still, the heavy Catholic conscience of Bolivian society means psychological damage can be more common than physical damage. Lanza, a devout Catholic, disagrees with the papal doctrine, which she finds is detached from reality. She says her friends who have aborted have not changed spiritually. The headquarters of Bolivia’s Catholics for the Right to Decide is hidden in a labyrinth of streets and without sign, yet it harbours an extensive library of Catholic defences pre- and post-abortion. Indigenous communities have had their respective abortion methods since time immemorial, and though some link abortion with a bad harvest, rituals such as bathing the woman in a river prevent such harm.

In 1973, a symbolic law was passed that legalized abortions in case of rape, lifethreatening situations, incest and abduction not followed by marriage (symbolic because the mandatory judicial order is protracted and has only been publicly granted ten times). The election of populist, leftist President Evo Morales made prochoice activists hopeful for more. But despite a reinvigorated look into sexual rights at the 1994 International Conference on Population and Development and even this year in Cochabamba, and despite a gender balance in the assembly, conservative factions – and what Lanza calls the ‘chip’ that resists the now-lay state – hold the ground. The issue is snubbed during campaigns; other matters are considered more publicly interesting.

‘It’s like drug trafficking’, says Claure. No matter how tough the crackdown, the demand will still exist. Only, the authorities don’t crack down. The state of the small commercial centre suggests that the ‘dentist’ has been operating there for decades. The area of the curacas, where the parteras are camped out, is well known to the police. In public memory, only two women have been imprisoned for abortions. The market is barely underground, and yet, societal silence is nearly absolute.

‘You have to take control of your body and of the political body, where your body exists’, says Pamela Calla, an expert on gender and social issues in Bolivia. ‘We have a lack of these discussions, and in the end, we are left with the incredible and the dangerous.’