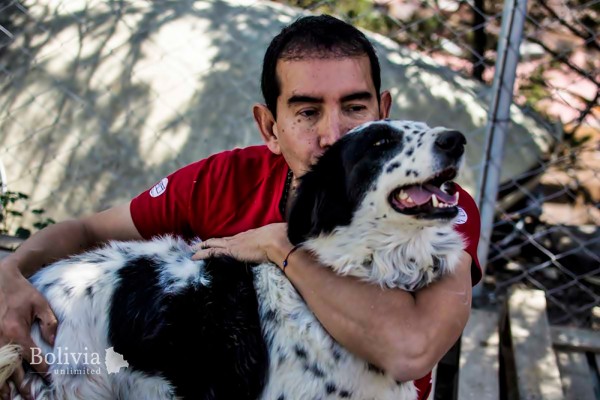 Both a bane and a boon, the country’s dog population is growing – and there are some people trying to help man’s best friend out

Over the past decade, Bolivia’s street-dog population has become an increasing public-health issue. There are currently 1.9 million dogs on the streets of Bolivia, an estimated 42 percent of which are abandoned pets. Rabies still presents a significant risk to Bolivians, and the population of abandoned dogs is multiplying, seemingly without restraint. In May 2017, for example, in Cochabamba alone there were two human rabies fatalities. Whilst the World Health Organisation recommends that any given dog population should not exceed 10 percent of its cohabiting human population, Bolivia is rapidly approaching this level, which only increases the risk of pathogenic transmission.

Yet Bolivia is also a country of diehard dog fanatics. In 2017, a schnauzer named Carmelo was chosen as the newest monk at a monastery in Cochabamba, having been rescued from the street by fellow brothers. Meanwhile, every year on the 16th of August, the feast of San Roque sees paceños celebrate the patron saint of canines by adorning their dogs in elaborate costumes. Even on a regular day, it is not uncommon to spot a well-pampered pooch sharing the pavement or plaza with the scruffiest of canines.

There are a number of explanations for this difference, the principal reason perhaps being a lack of education about the realities of dog ownership, ineffective sterilisation campaigns and an occasional impression of dogs simply as ‘guards’ or ‘house furniture’ that may easily be discarded. Bolivians often view their dogs as practical means of protection and hence issues such as sterilisation, inoculation and general welfare are not top priorities.

Attempts have certainly been made by the government to improve the lives of Bolivian pets. In 2017, for example, the Ley Municipal Autonómica para Animales de Compañía, approved by the Municipal Council of La Paz, outlined 22 regulations involving the sale and treatment of animals in the country. In particular, Article 48 prohibits the abandonment of pets, the sale of sick pets, the mutilation of pets for aesthetic value and the use of abandoned animals in military practices where harm is intended. The law also requires pet owners, vets and pet shops to be registered with the government.

Bolivia’s Constitution makes it the only one in South America that specifically addresses animal protection; additionally, various laws establish a general legal framework for the protection of Pachamama, ensuring the harmonious codevelopment of the human and the natural worlds. These governmental policies have, however, largely failed to stem the growth of Bolivia’s population of abandoned dogs. Alongside a general lack of education concerning the realities of pet ownership, these laws simply haven’t been effective in reducing the potential harm posed by these animals.

The failure to stem the growth of Bolivia’s street-dog population has provoked a number of additional responses, both from inside and outside the government. One of the main schemes that has emerged from within the municipality of La Paz is the Casa de la Mascota, a programme that is part of ZOONOSIS, the municipal department concerned with public health regarding animals. The main objective of the Casa de la Mascota is to curb the transmission of zoonotic diseases to the human population, especially rabies.

It is not uncommon to spot a well-pampered pooch sharing the pavement or plaza with the scruffiest of canines. 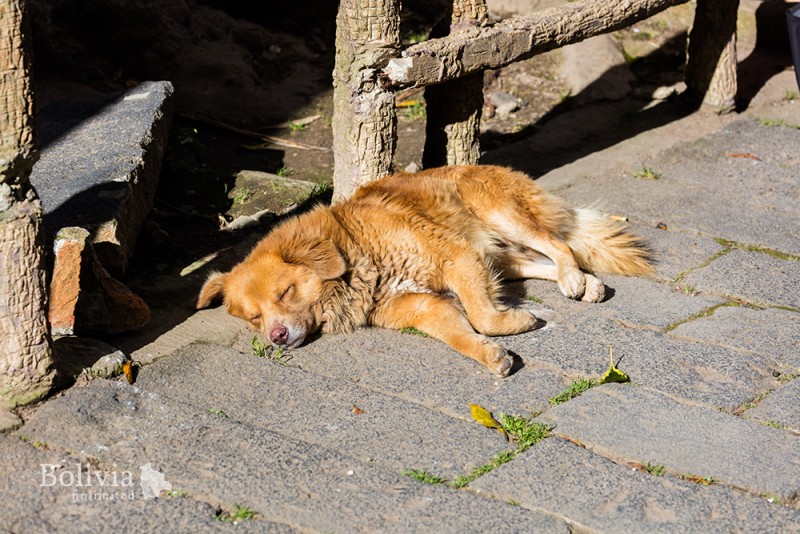 Miguel Aparicio, the officer in charge of the Casa de la Mascota, emphasises the role that the organisation plays in providing access to the services required by pet owners by law. Alongside its main objective, providing sterilisations and vaccinations, the Casa de la Mascota is also ‘starting to implement an online platform to register animals and their owners,’ said Aparicio. As well as medical and administrative measures, the unit intends ‘to launch different campaigns in areas around La Paz’ in the near future that will be vital in educating pet owners on the realities of pet ownership and providing access to medical services. The benefits of this will be twofold: a reduction in the number of abandoned dogs, and a reduction in the health risk posed by existing dogs.

On the subject of animal abuse, the Casa de la Mascota is less certain, commenting that it’s ‘unsure’ of exact numbers. Aparicio claimed that the unit ‘knows that there are issues of maltreatment’ – for example, ‘abandoned animals, animals being abused.’ The unit received ‘about 50 complaints from January to June 2018’, but Aparicio was certain that ‘there must be more unreported cases.’ In particular, Aparicio made a distinction between the rural and urban areas of La Paz. ‘There are no complaints coming from the more rural areas,’ he said, but he also noted the deceptive nature of this fact. ‘Because these [rural] areas are bigger, it’s harder to see if there are problems there,’ he acknowledged. ‘But we do hear about abandonments and lack of food, and, in some instances, cases where people were killing dogs and eating them – but we could never confirm that this was the case.’

Another source of hope for Bolivia’s street dogs works inside the community itself. Fernando Kushner abandoned his work as a publicist for luxury brands such as Chanel, Bulgari and Lacoste to instead pursue a life of helping Bolivia’s street dogs. Kushner claims that his fortune in the world of work has given him ‘a life philosophy where [he] can’t just ask, ask, ask’ but must ‘also give.’ Much of his work follows the same intention as the Casa de la Mascota, such as his ‘goal to sterilise all dogs in Bolivia’; for Kushner, this is ‘the only way Bolivia can be a country without street dogs.’

Generally, however, Kushner is skeptical of the legal efforts made to reduce the harm posed by street dogs. He believes that the government’s efforts have come too late, and are largely for publicity. The government, Kushner argues, is capitalising on a growing trend in animalismo, when the laws it is currently passing should have, in reality, been passed years ago. Kushner claims that ‘even if there are laws that are useful’, they are only useful in La Paz. ‘Yes, you can’t abandon your dog in the street [in La Paz],’ he said. ‘But what’s the point if you can go and buy another in El Alto?’ Ultimately, Kushner is skeptical. ‘What’s the use of the law?’ he asked. ‘It’s a show. I don’t want to take part in it and I don’t agree with the personal advantage politicians take from campaigns for animal protection.’

For Kushner, the solution to Bolivia’s street-dog problem is hands-on, and comes from inside the community. Kushner feeds more than 1,000 dogs a day. ‘I pick up food from six restaurants, including Don Pollo, Pollos Copacabana, Gustu, Margarita, Factory,’ he said. ‘They give me food and I also buy 50 bags of food – 22 kilogrammes each – per month. I give out food for five to six hours a day, and I volunteer at shelters five to six times per week.’ Kushner’s work extends beyond street dogs. His foundation, Abril y Ariel, named after his nephews, cares for La Paz’s young and elderly human populations; as with his work with dogs, much of Kushner’s help is focused on feeding those living on the street. For Kushner, these projects are not publicity stunts. Though he has appeared on numerous TV and radio channels, including CNN, he asserts that this is not his priority. ‘I don’t just want to appear, bring presents to the shelters, have my photo taken and then disappear,’ he said.

According to Kushner, the lasting solution for Bolivia’s street-dog problem must come from inside the home, and not from governmental organisations. Kushner agrees with the Casa de la Mascota’s Aparicio that the main issue is not one of money, but is instead about time and education. Education about a dog’s needs, and the realities of owning a dog, is the key to ensuring that pet owners do not assume a responsibility beyond their capabilities: ‘I lived with six dogs in Buenos Aires in a flat,’ Kushner said. ‘When you take the dogs out twice a day, they don’t damage anything, nothing gets dirty. It’s all about education.’

Real change for Bolivia’s street dogs may depend on the attitudes of pet owners themselves.

Kushner’s past in brand marketing makes him a keen advocate of the power of social media. ‘Let’s do massive campaigns,’ he urged. ‘I have had 1,300 interviews with TV channels, and newspapers both inside and outside of Bolivia. I am not a politician or a star that needs to be followed. I just do what I do transparently.’ Kushner’s glamourous past has also provided access to companies that have helped him in his endeavour. For example, the airline Amaszonas has helped transport vets and animals, whilst Sagitario Printing has helped produce material for Kushner’s workshops.

The future of Bolivia’s street dogs ultimately lies within the Bolivian home. Transparent education about pet ownership seems the only way to close the gap between Bolivia’s pampered pooches and its deserted dogs. Whilst the Casa de la Mascota and Fernando Kushner continue extensive campaigns for sterilisation and vaccination, real change for Bolivia’s street dogs may depend on the attitudes of pet owners themselves.