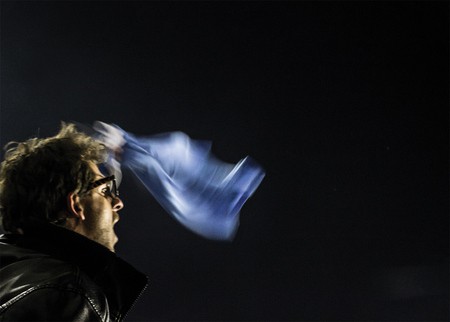 Violence constitutes an inherent and quotidian part of club football worldwide. In South America, barras bravas – supporters’ groups cut from the same cloth as European Ultras – are the culprits held responsible for this rise in bellicose hooliganism. Alex Walker speaks to former and current members of Club Bolívar’s La Vieja Escuela to discover what the future holds for Bolivia’s barras bravas.

You come to a stop after a thirty hour bus ride. Roadblocks set up by opposition fans outside the city meant that your journey was delayed by several hours. The bus is sweltering, a heady fug of paceño sweat clogging up your olfactory senses. It is 1pm: match day. You scrawl provocative messages in black marker pen on white banners. You spend an hour tearing up last weeks’ copies of El Diario for that split-second when the team emerges to a shower of printed letters. Then, you drink. The match begins, you can barely hear your voice through the relentless barrage of racism coming from across the stadium.

The opposition score. The place erupts. You try to sneak away ten minutes from time but when you step out onto the side street, your escape route is blocked. 15 opposition fans spread ominously across the road. There are no police in sight. Their leader, his gold tooth momentarily blinding you as it catches the disappearing sunlight, pulls up his sleeve, revealing the single word ‘Blooming’ tattooed across his bulging bicep. He rips off your shirt, sets it alight with his zippo, throws it to your feet, spits on its navy badge, turns away, zones in on his next victim.

It hasn’t always been like this. As one Bolívar fan recalls, ‘in the ’80s and early ’90s everything was friendly’ and opposing barras would amiably share the general stand; quite a contrast to the mandatory separation into the Curva Norte and the Curva Sur at Estadio Hernando Siles today. Bolívar’s barra, La Vieja Escuela , formerly Furia Celeste , was formed in 1995 by a group of youths, primarily university students, following in Argentina’s footsteps 40 years earlier. Ominously, Argentinian football had become increasingly bloody with the emergence of such barras; a situation that culminated in 2002 with a season that claimed the lives of five supporters and left numerous others with bullet or stab wounds.

Bolivia has clearly not quite reached these levels of aggression. For instance, since the inception of the Furia Celeste , almost 20 years ago, there has been just one reported death as a result of its action —a ‘The Strongest’ fan tragically beaten to death in ’98.

I stumbled across a cartoon that aptly captures the nature of violence in Bolivian football today: it depicts two Argentinian fans scuffling, two English fans exchanging blows and a Bolivian fan sitting behind a computer battling his opponents through the medium of Facebook. The real underworld of Bolivia’s barras bravas , then, can be found in the attitudes —though not as much in the actions— of their members: verbal aggression and taunting are commonplace but violent incidents are relatively rare. That is not to say that physical aggression between barras bravas is a dying phenomenon—quite the opposite.

In Santa Cruz, according to Javier, a former member of La Vieja Escuela , ‘win or lose, the fans clash’. He explains that while ‘all violence in La Paz is spontaneous’, elsewhere it has become increasingly organised. Football, crucially, has also become ‘a platform for a political agenda’. In fact, in Estadio Ramón Tahuichi Aguilera, Santa Cruz, banners demanding ‘autonomía’ have become a staple of match day protests.

Esmeralda, aka Cholita Fox, an icon of La Vieja Escuela –the only cholita to belong to a Bolivian barra of this nature– explains that barras are a reflection of their city: ‘your club identity and your regional identity are linked’. She adds that today there are more female than members in La Vieja Escuela . Santa Cruz, for example, has a notably regionalist identity and the barra, consequently, is notorious for its racist chanting.

While the violence that accompanies the rise of such organisations is certainly a cause for concern, there may well be a more pressing one. In the 1950s, the barras of Argentina started out, much like those of Bolivia, as groups of dedicated fans who received free shirts and tickets by officials who needed votes by season-ticket holders so as to get elected onto club boards. Once these fans had their foot in the door, however, they began to turn the screw and increase their demands, resorting to extreme –often violent– measures to tighten their grip on the club’s hierarchy. The barras of Argentina, allegedly, take hundreds of thousands per annum though controlling ticket sales, club merchandise and refreshments within the stadiums, much like a mafia organisation would. More alarmingly, though, is the claim from Gustavo Grabia –an Argentine journalist and corruption investigator– that larger barras also receive up to 30% of outgoing transfer fees and 20% of certain players’ payslips.

This is an ominous warning sign for Bolivia where the culture of barras bravas is still in its initial stages. Although it can clearly learn from Argentina’s mistakes, Bolivian football may well have already condemned itself a silent slave to its burgeoning barras bravas .