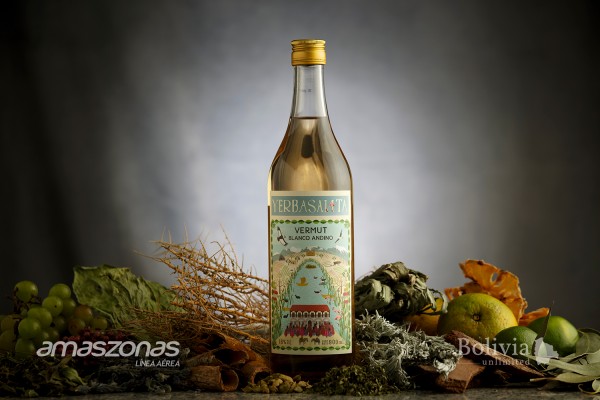 One for the Taste Buds

Vermut Titicaca, produced by the renowned Master Blends company, claims to be Bolivia’s first ever take on the traditional vermouth used in cocktails across the world, and it is certainly not one to be overlooked. Inspired by agricultural engineer and wine expert Joan Carbó, who originally hails from Barcelona, the vermouth ‘blanco’ and ‘rosso’ have only just appeared on Bolivian shelves. But already the product is showing signs of huge potential on the global stage with interest from the Cuban, Chilean and Argentinian markets.

Anahí Cusicanqui, a business administrator with the Master Blends company, says with a laugh that thanks to Carbó’s ‘crazy ideas’, the company was able to produce a product whose aim is to ‘maximise all that is Bolivian.’ Encompassed under this identity are the flavours that are so particular to Bolivia due to the plants and herbs that can be found exclusively on the altiplano and in Amazonian rainforest.

Master Blends’ vermouth ‘blanco’ – or Andino – is a drink inspired by the Bolivian altiplano and the flavours and culture that it represents for Bolivian people. The herbs rica-rica and ajenjo (also known as wormwood) are the main contributors to the vermouth’s flavour, and they are sourced in the renowned Salar de Uyuni and ancient Inca settlement of Isla del Sol in Lake Titicaca, respectively. A beautifully designed image on the label of the bottle shows a tableau of indigenous on the aforementioned Isla del Sol. Cusicanqui says that altitudes of more than 3,000 metres does not affect vermouth production as it does the distillation process of other alcohols, and that this white vermouth is a much more fruitier alternative to a dry vermouth ‘blanco.’ She adds that Master Blends makes a special effort to locally source all 32 of the distinct and natural ingredients that contribute to this vermouth’s rich and characteristically Bolivian flavour.

The vermouth Andino’s counterpart, vermouth Amazónico, gains its flavour from the extensive Bolivian Amazon region. Its most noticeable ingredient is canelón, a plant found in the heart of the tropical rainforest. This is an even fruitier vermouth, composed of approximately 24 locally sourced ingredients, among which are more berries and fruits than herbs, unlike the vermouth Andino. The history encompassed by the colourful and detailed label of this bottle tells the story of the arrival of Hispanic colonists and their search through the Amazon for El Dorado. Canelón was considered to be nearly as valuable as gold in this era, as it was a flavour that the Spanish had never before encountered.

In order to produce both the vermouth ‘blanco’ and ‘rosso’, Master Blends has teamed up with the Kuhlmann Distillery, located in Tarija. Vermouth is approximately 90 percent wine, and so the balancing and mixing that takes place in Tarija carries equal importance to the infusions of herbs and fruits that is carried out in La Paz. The infusion, which reaches an 80-90 percent alcohol content, is sent to the Kuhlmann Distillery to be mixed, balanced and bottled with high-quality white and red wine. Kuhlmann’s Franz Molina says that a white muscatel wine is used for the white vermouth that is extremely aromatic, fine and clean. The red vermouth is produced from muscatel and tannat, which thrives at Tarija’s 2,000-meter altitude.

Both vermouths are already showing great potential in the international market; however, at this early stage of production the Master Blends company is prioritising making it available in Bolivia nationwide in restaurants, bars and cafés.