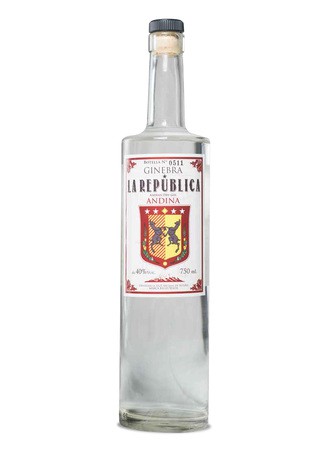 When thinking about Bolivian alcohol, the most likely things to come to mind would be beers such as Paceña or Huari, Tarijan wines or singani. Besides these select few, the world of Bolivian spirits may seem fairly barren. However, it is the aim of Daniel Lonsdale and Joan Carbó—and their liquor company, La República—to change this. Their goal: to create a unique drink for the premium market that is distinctly Bolivian.

Having already pioneered their first Bolivian spirit—Supay (named after the Quechua and Aymara god of death), a spiced liquor produced from the locoto pepper—the Bolivian-Spanish duo are now set to move into the area of gin. Daniel is no stranger to the world of spirits, coming from a family with a history of spirit-production. In fact, his grandfather produced some of Bolivia’s first dry gin, though only from imported ingredients. Joan, who is Spanish by birth, drew on his background in chemistry to create this new brand of gin. However, if you’re thinking of the dry, chemical-tasting alcohol that you get back home, you’d better think again. This is Andean gin.

Gin is produced by flavouring alcohol with certain ingredients called botanicals, including juniper berries, which are found in all gins, including this new Andean variety. According to Daniel and Joan, though, there is a crucial difference between their gin and all the other gins on the market.
‘We try to use the best, natural, freshest ingredients’, Daniel says to me while pouring out a sizeable measure of the clear liquid. ‘We get the juniper from Macedonia and the cilantro we buy from an American company, as well as the cardamon. Everything else is local: the orange peel, the lemon peel, the anise, the cinnamon, the ginger and the rest of the typical Bolivian flavours.’
And tasting the gin myself, it really does stand out—the flavours are subtle, the aroma is gentle and fruity. When compared to the harsh, burning sensation produced by some variants of the spirit back home, the delicate blend of gentle sensations is pleasantly surprising.

However, it is not only the classic gin ingredients that are sourced locally: Daniel and Joan have also added to their gin many solely Bolivian ingredients, such as the tumbo fruit and locoto and ulupica peppers. ‘That is what we’re trying to do with this product—we’re trying to show the diversity of everything we have in Bolivia’, says Daniel.

Not only are most of the ingredients Bolivian, but the production facilities are located in El Alto, more than three and a half thousand meters above sea level. While this may seem somewhat insignificant, the altitude at which the gin is distilled is, in fact, a key factor in its production. The lower atmospheric pressure that comes with the high altitude means that both alcohol and water boil at lower temperatures. Because of this, the gin retains a distinct complexity of flavour. Normally during the distilling process the high heat causes much of the flavour to evaporate; however, this altitude allows Daniel and Joan to distill at lower temperatures and to maintain much of the flavour of the fresh local Bolivian fruits and herbs.

As Daniel mixes my gin to give me a slightly more jazzed-up variant on the traditional gin and tonic, Joan says, ‘For me, the juniper berries are what you really smell in other gins, but in here, juniper is at the same level as the other aromas. To me, this is the true meaning of balance’.
‘I think it is important to have a personalised flavour’, says Daniel -- and I believe that here lies the quality which makes Daniel and Joan’s gin truly individual. The root idea was not simply to make a gin but to make a taste of Bolivia, and rather than take the well-trodden road of making a traditional gin they have worked to showcase Bolivian ingredients and to utilise their unique setting. ‘We don't just want to do what the people of Europe have been doing for the past hundreds of years’, says Joan. This gin is special: distinctly Andean -- distinctly Bolivian. .