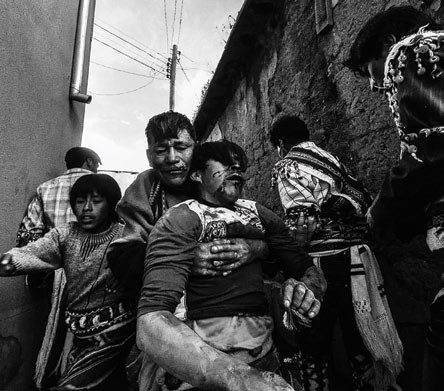 From the highlands of Macha to the valleys of Torotoro, fighters from the region come together to celebrate the ceremony known as the ‘Tinku’, which in quechua means ‘encounter’. In this anthology of photographs across time and territory, Bolivian Express documents the changing face of these legendary battles.

Over the past 40 years, Tinku has taken place across Northern Potosí, Southern Oruro, and on bordering communities between the departments of Sucre and Potosí. San Pablo de Macha (or simply ‘Macha’) holds claim to being the ‘ground zero’ of Tinku, though other prominent locations are Pocoata, Torotoro, Aymaya, Acasio and San Pedro de Buena Vista.

French-born photographer Alain Mesili visited Pocoata in Northern Potosí in 1971, where the Fiesta de la Cruz was to be held on the 3rd of May. To mark this pagan-religious festival, a confluence of indigenous peoples from the surrounding communities meet in the central plaza to fight.

Before the ceremony, the leader of the Tinku carries a large cross on his shoulder into the church. An aguayo can be seen draped over the Christ on the cross, a powerful symbol of the syncretism between ancestral and religious iconography which has become the essence of this tradition. Warriors parade into the plaza, congregating amidst the sounds of hula-hula panpipes and the charango.

Men and women take part in this ritual offering of blood to the Pachamama. ‘The young and old take to centre stage, spitting out teeth in every direction. Bloodstains leave their mark on the arena, and are left there, like trophies [...] after the three days the fiesta takes place, 14 people have died'.

As Alain points out, 'Caiman-brand 90 proof alcohol is the true winner of the ring where the most fierce fights take place [...] from midday onwards, those who don’t fall in combat, are taken down by the chicha' 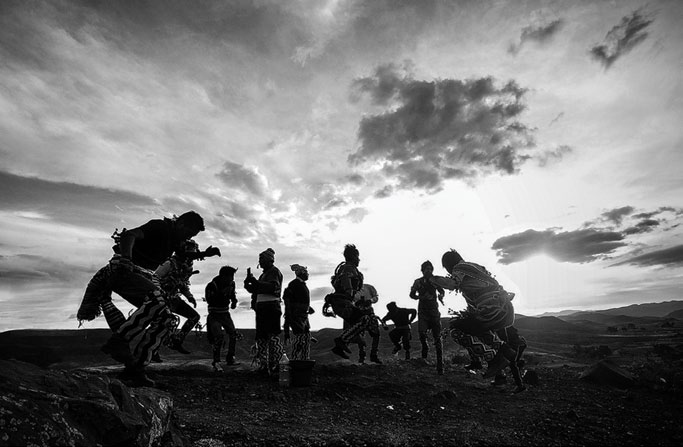 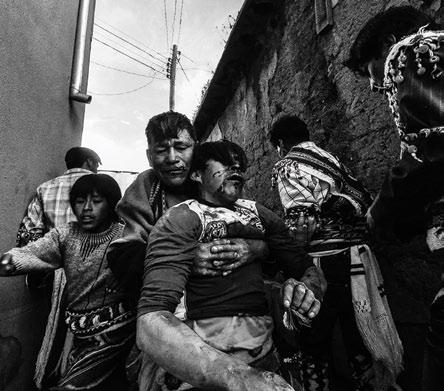 The present work documents the celebration of "Tinku" (encounter) held in the village of Macha, a community located in the north of Potosi, where every 3rd or 4th of May various Ayllus from Quechua communities prepare for the greatest and oldest fiesta in this region of the country.
This village fiesta, like many in other parts of the country, is characterized by its syncretism. On the one hand, the ‘Lord of the Cross’ is ever present. Each Ayllu displays its own, offering it its faith and devotion, representing Catholic saints and icons. On the other hand, the indigenous world is represented through the participation of the locals. The tribute consists in the blowing of fists between members of different Ayllus, who shed blood. Occasionally this ends in death, and this year was no exception. For them, this practice is a way of giving tribute to the Pachamama, from whom they expect optimal and successful harvest.
A macheño whom I talked to assured that while there is plenty of migration from this region towards neighboring countries, especially among the newer generations, their allegiance towards their culture does not change. It remains in the spirit of every devotee of this great party.

Two men face each other in a makeshift boxing ring. The crowd presses inward, squeezing tighter. A man cracks a whip at the spectators to maintain space in the ring. Mesmerized spectators casually eat ice cream amidst the violent display. Children enter the ring. Elders test their strength. Over the next few hours, fights are arranged according to relative height, age, and weight: welcome to the Bolivian Fight Club.
A mixture of alcohol, sweat, adrenaline, and testosterone, make for a cocktail of frenzied unconsciousness which culminates with bodies scattered across the pueblo at the end of this 3 day fiesta.
Our Tinku photographs were taken in Torotoro on the corner of Charcas Street, near the Plaza Central. Annually, on July 25, Quechua groups of Laimes and Pampas congregate here, coinciding with the festival of Apostle Santiago. 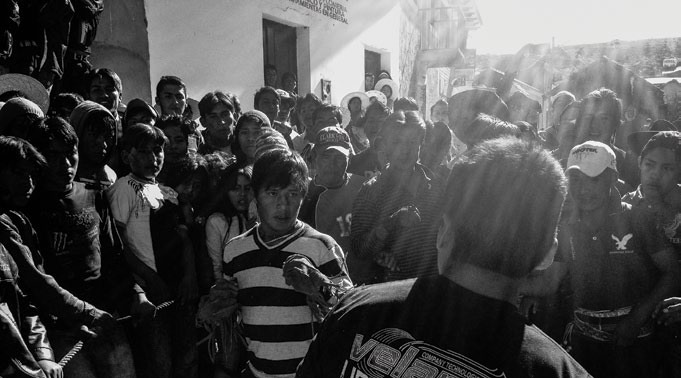 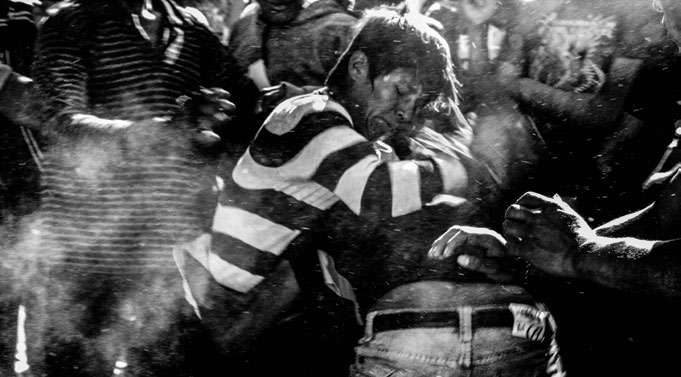 Mila Araoz and Amaru Villanueva Rance
At the end of the Tata Santiago four day epic fiesta, Torotoro is scattered with bodies. In what at first appears like population on the verge between life and death, these bodies are rather in a limbo between drunkenness and unconsciousness. If any of them are half-dead, it has nothing to do with fighting. Some have vomit dripping down their shirts whilst others lie on steps and pavements in contorted sleeping positions, as if they had been tortured during their sleep, perhaps whilst dreaming. The streets and houses retain the faint but pungent smell of chicha. 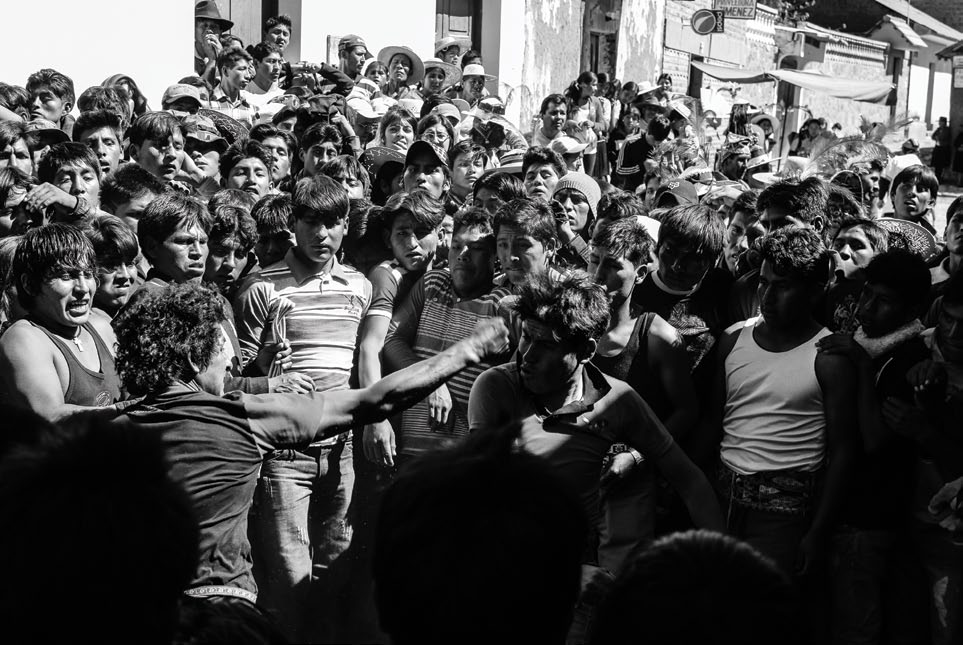 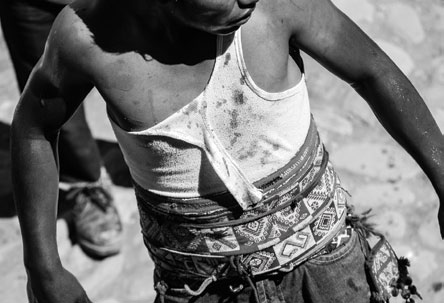 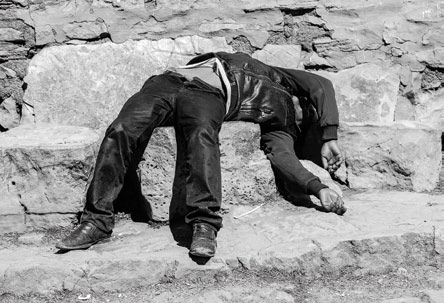 Earlier that day, walking in the midday heat, young children run past and head towards a crowd which gets progressively larger and more dense. Running to join this mass of people my icecream falls onto the dusty dirt road, but it doesn’t matter. We’re barely minutes away from the first fight.

By 11:55am the street is bursting with expectant onlookers. Every balcony and shop window is packed with people, most of them on tiptoes. Some kids have climbed up to a window ledge and grip onto rusty metal fences to get a view of the action. A moustachioed man in the center of this circle uses a belt to whip the spectators in the inner circle to make more space for the fight. Being in the front row suddenly doesn’t seem too attractive.

Up on a friend's shoulders I get the perfect view into this small vortex at the centre of the crowd, where two men prepare for the first fight. For several seconds nothing happens, as the two men in the centre stumble around in inebriation. The eye of the storm is calm and silent. Without warning, the fight begins.

Swinging fists, sweat, screams and tangled bodies. Punches land without aim or grace, it’s all very hard to make out. The fight is broken up after some 20 seconds without a clear victor. Indeed, none is proclaimed. Instead, they greet each other after the fight with a tough embrace. The frenzied men rejoin the crowd with swollen lips and foreheads, blood on their ripped clothes. If they are supposed to be representing their feuding communities, it’s not apparent by their side of the crowd or their clothing. Rather, it seems like a group of young men keen to prove their valour against any worthy opponent. Later they celebrate with a red plastic bucket of chicha. Those who end up unconscious fall to the ground under the influence of alcohol, a mightier opponent to any encountered during the day.