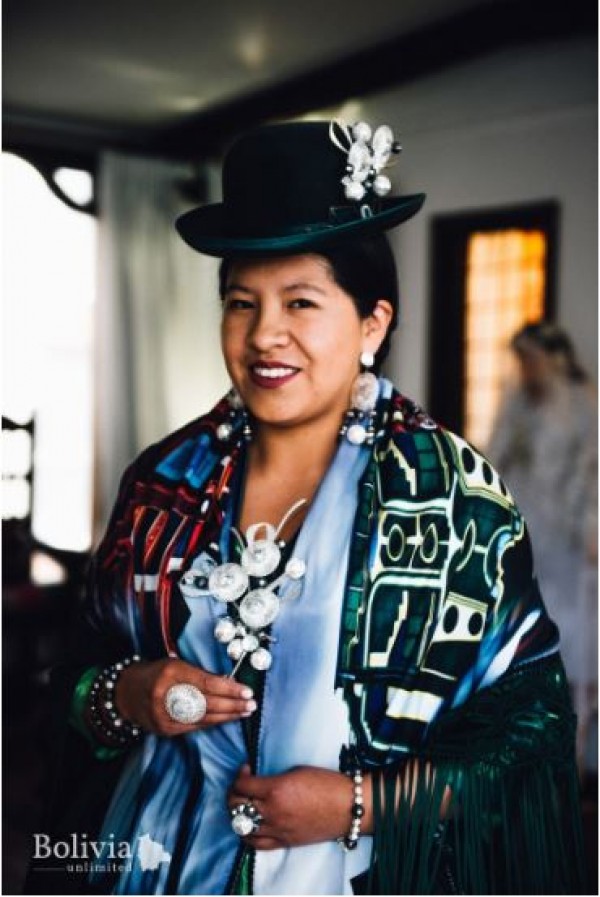 Cholitas in the City of Light

The cholita, or the mujer de pollera, is an iconic representation of Bolivia and La Paz. Bolivian designer Ana Palza, who makes jewellery and clothes for mujeres de pollera, accompanied six cholita models to Paris for a three-day event organised by the Cartier Foundation in October. In an event space designed by famed Bolivian architect Freddy Mamani – whose cholets in El Alto have gained worldwide acclaim as of late – these women modelled traditional Bolivian clothing in the capital of haute couture.

Palza, who has created jewellery for 19 years, began to focus on cholita fashion about five years ago. She noted that most jewellry was too expensive to be worn by participants in La Paz’s extravagant Gran Poder – pieces were frequently stolen during the wildly chaotic celebration. Palza wanted to create a line of affordable but elegant jewellery. So instead of using gold or silver, she created pieces using of pearls, finding inspiration from the style of the cholitas. Palza then started making clothes after realising that there were no traditional cholita wedding gowns. 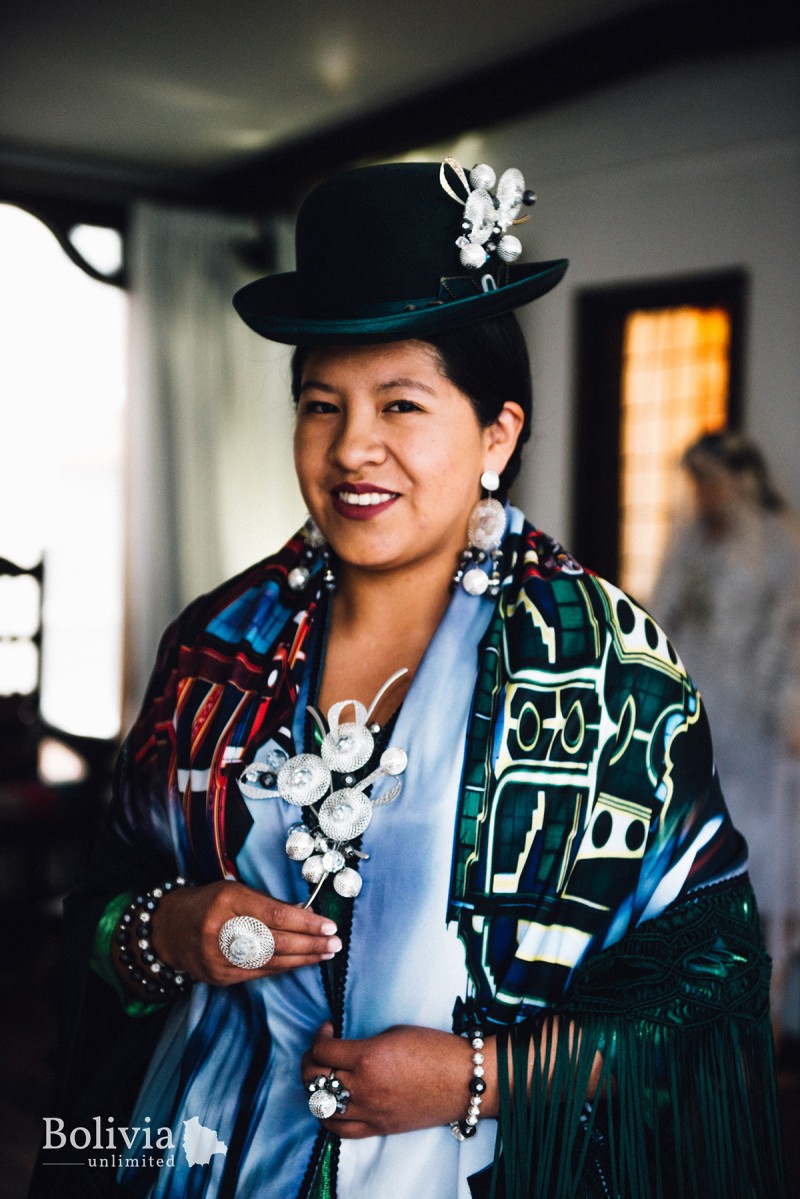 A cholet without a cholita is nothing if not incomplete. Thus the fashion show.

Palza’s collaboration with Mamani started six months ago when she was contacted by the Cartier Foundation to organise a fashion show with mujeres de polleras in Paris. The impetus for the show happened two years ago, when Mamani had been invited to build a cholet-style installation inside the Cartier Foundation’s Paris location. But a cholet without a cholita is nothing if not incomplete. Thus the fashion show.

The three-day event began with a traditional challa, a blessing ceremony performed by a Bolivian yatiri). The next day, the mujeres de polleras posed in the streets of Paris in their traditional raiment. On the third day, the fashion show took place.

The show was divided into five parts. The first showed the rural origin of the mujer de pollera, and how polleras used to be made with sheep’s wool. The second part featured vintage polleras made of cotton, less colourful than those worn today. Then Palza paid tribute to Mamani by exhibiting clothes against a background of photos of cholets by French photographer Christian Lombardi. The fourth part highlighted the vicuña – an undomesticated relative of the llama that produces some of the softest wool in the world – with old and new takes on the traditional Andean wedding shawl. The finale was a tribute to Gran Poder, the epic May-June paceño Andean Catholic celebration. For Palza, authenticity was essential. ‘We wouldn’t have played any morenadas from [the carnival of] Oruro,’ she said. ‘They had to be from Gran Poder.’ The head of Cartier described it as ‘full of seduction, charm, authority, but also freedom – very beautiful.’

Sandra Zulema Patzi Mayta, one of the models, was glad to have been able to show the fashion world how Bolivian women dress, but she said that she and her fellow models had to constantly remind people that they were not from Peru, but from Bolivia. She feels that cholitas in Bolivia still face discrimination. ‘Everywhere else, people want to take pictures with us, but especially in La Paz, we are not valued,’ she said. 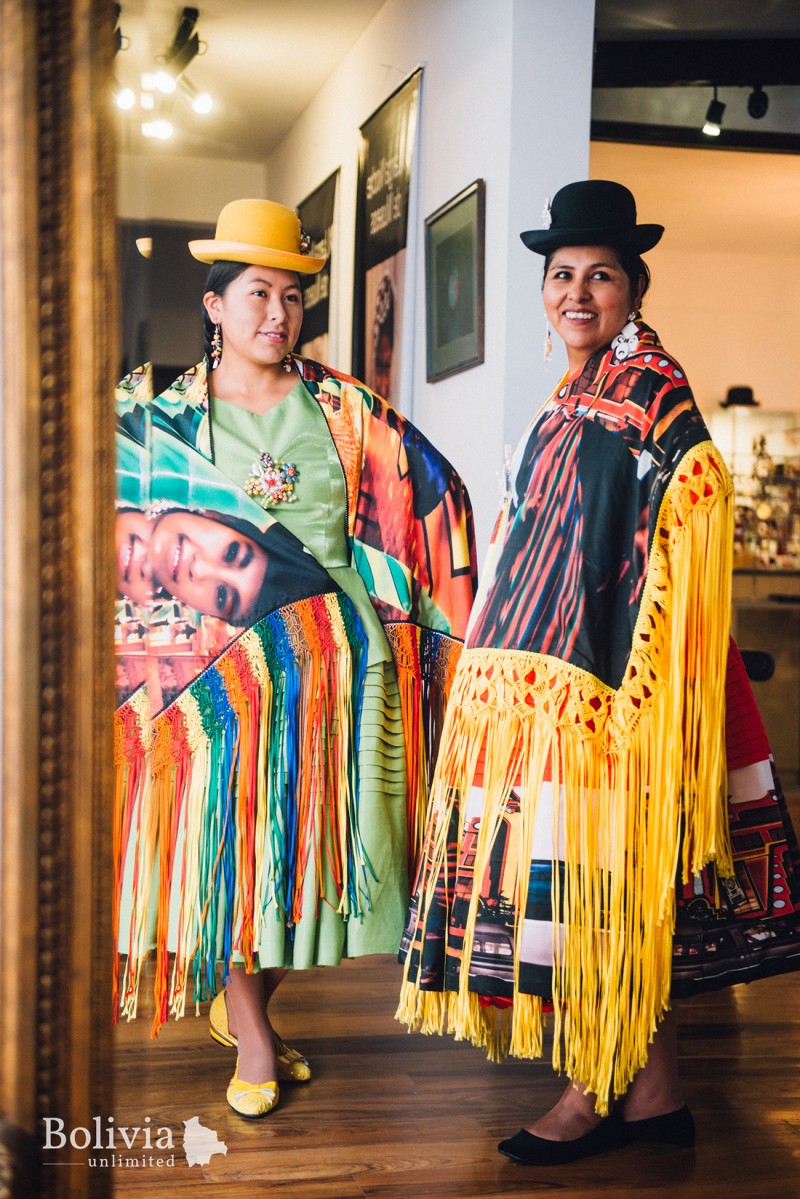 ‘This is not only about the clothes – the mujer of pollera is not an item – this is about the woman.’

When asked about the future, Palza is vague. ‘I don’t know, I am working gradually,’ she said. ‘I am not planning anything. I am not doing this to make money or to win – it is a real passion.’ She has been invited to Spain to show her designs, but unless she can bring genuine cholita models, she said she’ll decline. Her creations are for the mujer de pollera to wear, not for a model to appropriate. ‘If we travel somewhere, we are bringing the mujer de pollera with us,’ she insists. ‘It is the woman who represents what we do. This is what we show, the entire woman. – with her essence… This is not only about the clothes – the mujer of pollera is not an item – this is about the woman.’