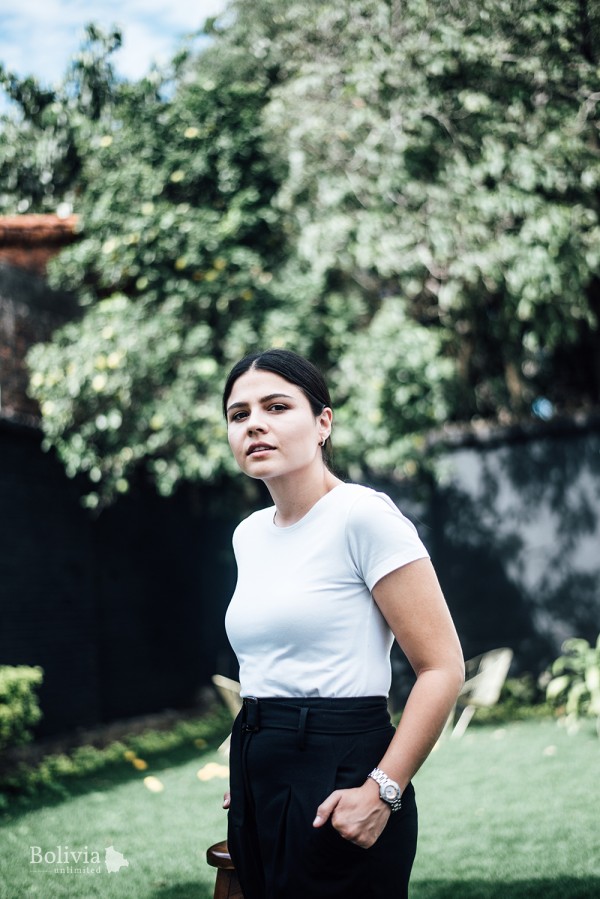 A young designer is finding success in the country, and on the Hollywood red carpet

In the Equipetrol district of Santa Cruz de la Sierra, nestled amongst apartment towers and chic restaurants and cafés, Weise Atelier sits surrounded by adobe walls on a quiet side street. No sign indicates the presence of one of Bolivia’s premier fashion lines in the sprawling, steamy capital of the Santa Cruz department, but after entering through the iron gate and into the refreshingly cool interior, a visitor is greeted by a small woman in a crisp white shirt and dark slacks, ready to work and to chat, with a welcoming smile on her face and an infectious laugh.

Ericka Suárez Weise, 32, is the head of her eponymous ‘prêt-à-couture’ clothing line and the scion of a notable cruceña fashion design family. Her grandmother is a seamstress who fabricated clothes for a circle of traditional families in Santa Cruz when the metropolis was still only a village surrounded by jungle, and her mother, also named Ericka, is a designer who introduced modern women's fashion to the city in the early 1980s. ‘I grew up in the atelier,’ Suárez Weise says, ‘under the table actually.’ After studying fashion and textile design at University of Palermo in Buenos Aires in the early 2000s and living and working in the Argentine capital for a few years, she moved back to Santa Cruz in 2010, starting her own line in June 2011 in her mother's studio.

‘I grew up in the atelier, under the table actually.’

‘When I came back [to Santa Cruz], there were no young Bolivian designers’ brands,’ Suárez Weise says. ‘It was just haute-couture designers, and the only other option was to buy Argentinian or Brazilian clothes. There were no young people making their own brands or fashion lines.’ Working out of her mother's atelier, she quickly designed her first collection, which was an immediate success. In 2012, she was named Designer of the Year by Bolivia Moda, the country’s foremost fashion-industry show.

Recently, Suárez Weise moved into a new atelier. ‘I was working in the same building as my mother and grandmother for eight years,’ she says. ‘I decided to move because I needed a bit more space. And actually, I needed this young spirit [of the new atelier] for my customers.’ The two-story building where she now works has dark wood floors and a small showroom in front  with mannequins clothed in her latest creations. Her upstairs office features a small, organised desk. Bookshelves are filled with fashion and art books, and her personal studio downstairs has dozens of illustrations and photographs pinned to the wall and scattered about the work surface. In two outbuildings, her staff work on her latest creations, busily sewing, cutting and fabricating the newest Weise creations.

Suárez Weise is staking a middle ground between haute couture and prêt-à-porter. Her brand is a ‘middle moment,’ she says, ‘because it’s an accessible couture for people who cannot afford a US$100,000 piece, a Chanel. I have my “prêt-à-couture” brand, which works with the same artisanal ways of making couture, but in an accessible product.’ Her price point – US$200 to US$2,000 per creation, depending on materials – is certainly out of financial reach of the average Bolivian woman, but it’s accessible, even economical, to the cruceña high society that covets her designs. And even in La Paz, with its vastly different climate and fashion aesthetic, her line is making inroads. ‘The indigenous high society is starting to buy couture,’ Suárez says, ‘starting to feel comfortable going to a designer and asking for a wedding dress or a custom design.’

But now Suárez Weise is gaining recognition far beyond the narrow confines of the Bolivian fashion world – in fact, Hollywood has been taking notice. For the last two years at the Screen Actors Guild Awards, which is part of the seasonal run-up to the Oscars, Orange Is the New Black star Selenis Leyva sported dresses by Suárez Weise. In 2017, Leyva wore an elegant black gown with a ruffled train on the red carpet, and earlier this year the actress wore another Suárez Weise creation, one from her 2018 ‘Habitat’ collection, which was inspired by the orchid flower.

Suárez Weise’s collaboration with Leyva was serendipitous. ‘It’s a story of a friend of a friend of a friend. A friend introduced me to [Leyva's] stylist… And he looked at my work and he said, “I want to work with your brand.” I was like, “Oh my God!”’ she says, breaking into a laugh.

With Hollywood's spotlight shining on her brand from afar, Suárez Weise now finds herself in the enviable position of being able to extend her reach into other even larger markets. In New York City, she’ll soon be represented by a collective of emerging designers, and stylists in Los Angeles have expressed interest in her creations for their actress clients. ‘I work long distance now,’ Suárez Weise says. ‘I have stylists there that I work with who can do the alterations.’

But she’s not resting on her laurels, far from it. Besides influences as disparate as Dutch designer Iris van Herpen, who utilises 3D printing in her creations with strong nods to nature and fantasy, and stalwarts Chanel and Dior, Suárez Weise also looks close to home to guide her artistry. In 2016, inspired by a visit to Bolivia's Salar de Uyuni, Suárez Weise released her ‘Salt & Sky’ fall/winter collection. With lace that mimics the crystalline structure of the salt flats, gradual colour variations that symbolises the rising of the sun and feminine silhouettes under gossamer capes slightly reminiscent of cholita shawls, the collection exemplified an ultra-modern interpretation of one of Bolivia’s signature natural beauties. And last year, her fall/winter collection was heavily inspired by the late cruceño painter Herminio Pedraza. Suárez Weise used Pedraza's characteristic, colourful depictions of women to inform her elegant ‘Halo’ collection. Rich, vibrant violet gowns worn off the shoulder paid homage to the master painter who died in 2006.

‘My “prêt-à-couture” brand works with the same artisanal ways of making couture, but in an accessible product.’

Now busy working in her atelier for a forthcoming collection, Suárez Weise is drawing inspiration from the indigenous Mojeños people from Bolivia’s Beni department, who perform the traditional machetero dance with large headdresses made of the plumes of tropical birds. Translating this style into women’s fashion is painstaking work, but the results are stunning, and they’ll soon be on the runway for the world to see – and perhaps, soon, we’ll be treated to the sight of a Hollywood actress wearing an Amazonian-headdress-inspired creation on the red carpet.

But for now, don’t look for a Weise gown at any boutique on Fifth Avenue in Manhattan, or King’s Road in London. Her creations are not made for mass consumption. ‘I don’t want to have a huge brand now,’ she says. ‘I know I can’t – I know my limitations with production. I cannot go to Fashion Week and produce 10,000 pieces – no, this is not my situation. I am working with unique pieces, I am hoping we can reproduce 10 or 20 pieces. I have artisanal methods. It requires a lot of time, human time.’