Bolivia Under The Knife 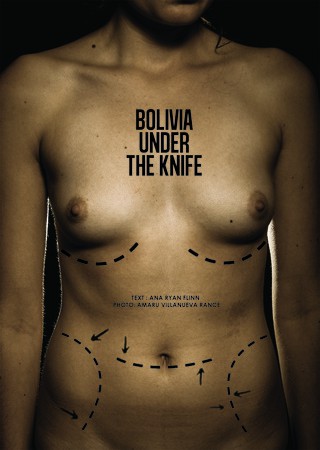 The increased availability and acceptance of cosmetic surgery in Bolivia dangles ideals of Western perfection tantalisingly on the periphery of the population’s reach. Cosmetic procedures have traditionally only been available to those who can afford it, shaping the physical appearance of Bolivia's upper class, distancing them from their poorer, and typically indigenous, counterparts. Their Bolivia has historically been betrayed in favour of one which aspires to be ‘tall, white and English-speaking’, to quote Ex-Miss Bolivia Gabriela Oviedo’s infamous words.

Cosmetic surgery in Bolivia is on the rise, with new technology becoming increasingly available, and the stigma attached to it rapidly diminishing. Cosmetic surgery now seems so widespread that anecdotes are abound, with one friend even telling me about a couple he knows who now sport identical noses. I discussed this difference with Andrea, a young woman who underwent a rhinoplasty several years ago. She talks of her friends who have gone through various procedures and speaks of their willingness to discuss their personal experiences, trading stories and comparing the different services they have been given. Whilst 10 years ago people may have felt uncomfortable, now she claims the issue is ‘wide-open’.

But as our conversation developed, Andrea suggested that, although on the increase, plastic surgery in Bolivia still remains largely confined to certain sectors of society. This is not necessarily driven by economics, but largely shaped by tradition and cultural heritage. For Bolivia's lower classes, plastic surgery is not seen as option, ‘it is simply not on their radar’, according to Andrea.

Dr. Valdivia, a local surgeon I spoke to, contests this claim, arguing that the gap between the poor and rich is narrowing with the astronomic rise of a new middle class. He’s aware of these changes when patients arrive at his consultation room from unexpected backgrounds. Of the patients who come and see him, many of them ‘can’t speak good Spanish or have poor hygiene, yet they ask for an expensive surgery that they can definitely afford. Some don’t even attempt to negotiate the price and pay in cash’. He explains that people are happy to share their experience with those in their social circle, and that this receptiveness is their most important source of publicity, ‘if you do a good job with one client, they will bring you ten more. It is our most effective form of marketing’.

Dr. Valdivia understands his profession as a form of healing, seeing plastic surgery as a way of also providing a remedial service, from minimizing scarring after a violent incident, to curing a patient's inability to speak by improving their self-confidence. In his mind, this is the fundamental importance of the work he does. The focus is not on increasing margins to the exclusion of poorer patients, so he often reduces the price of a surgery to make it accessible to as many people as possible.

Yet the industry as a whole is understandably defensive on the issue of its social value, perhaps guarding against the popular notion that plastic surgery is merely a commercial venture which attends to a society’s frivolous needs. One can easily get this impression by reading La Paz's newspapers, brimming with advertisements. According to one ex-patient, the different procedures (liposuction, nose jobs and breast implants) are sometimes even offered as combo deals. A Botox clinic even provides discounts if you 'invite a friend'. This can make us question whether the cosmetic surgery industry exploits, rather than heals, an injured self-esteem?

The commercial success of plastic surgery has certainly found a place in Bolivia's tourism industry, offering services for a fraction of foreign prices. Makeover Travel, a company based in Santa Cruz, offers a full facelift and ten nights in a 5 star hotel for £1500, in comparison with typical prices of £4,300-£6,000 in the UK, excluding accommodation. The industry, sometimes referred to as ‘Beauty Tourism’, is booming, with a reported increase of 60% each year. Bolivia's plastic surgery industry is undoubtedly growing, yet this does not necessarily imply that it has found a place within Bolivian society; most of the information available in the local context concerns medical tourism, rather than trends among the local population.

Views on physical appearance in Bolivia are at a tension, with indigenous physiques competing against the prevalence of imported ideals of beauty, perhaps most notably in Santa Cruz. The dominance of beauty pageants in this department reveals a fixation on beauty that is saturated with Western ideals. Long legs, light skin and typically American features are the norm, as Roque Alvarenga, a makeup artist at Promociones Gloria (a model agency and pageant promoter) points out: ‘in Santa Cruz, it's the culture of beauty’. The children who attend modelling schools are offered the option of plastic surgery from an early age, firmly modelled on an aesthetic of which international film stars and beauty queens remain the best exemplars. A surgeon in La Paz reports patients requesting 'a nose like Brad Pitt' or ‘lips like Angelina’ though adds: ‘we reserve the right to refuse surgery to patients who request modifications that we can foresee not going with their natural appearance’.

Yet after speaking to surgeons and patients, they both emphasise these procedures are more about self-confidence than a change in appearance. In other words, an ideal beauty is not an end in itself, but a means by which an individual can feel happier with their self-image. Another important aspect of this work involves reconstructive surgery done to people with disfigurements. In these cases, it would be callous to accuse these patients of frivolity when what they’re after is feeling normal and accepted within an unforgiving society.

What remains to be seen over coming decades is whether Bolivian society is able to create new ideals of beauty more closely tied to the indigenous and mixed-race bodies of which the country is made up. One sees Cholita pageants in which the reigning ideals of beauty are based on different body shapes, charisma and character. Of course, let’s not forget these archetypes often come with a mouth filled with gold teeth. If aesthetic conceptions can be reconciled with local identity, the cosmetic surgery industry will have to follow suit. This would surely be interesting, though should we perhaps instead wish for Bolivian society to grow comfortable in its own skin, making the pursuit of a different aesthetic ideal redundant altogether?