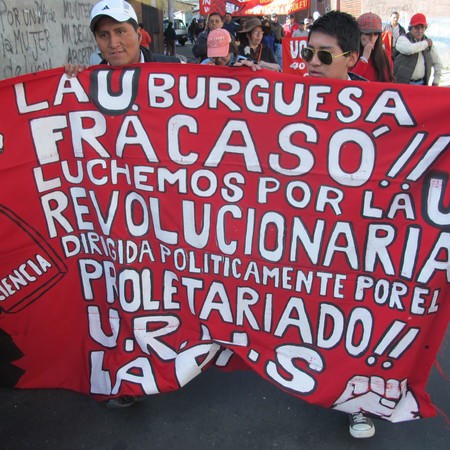 Revolutionaries in Bolivia have a stronictatorship when persecution was a real threat. Natalia claimed that pseudonyms were still necessary under Morales’s government though nothing suggested to me that the members of POR were under any genuine threat from the authorities. Personally, these fake names reminded me of when I used to read superhero comics as a kid, where one’s secret identity was one’s most important asset, the only g history, mostly due to the years of oppressive dictatorship and colonial powers that they have faced over the last four centuries. Though their influence has varied over time, they have never been an insignificant force in the Bolivian political landscape. However, since the transition to democracy, the nature and impact of these revolutionary parties has started to change.

Bolivia’s most memorable and influential early revolutionary was the Aymara leader Tupac Katari, who stood up and rebelled against the Spanish empire in 1781. Though his attempted siege on La Paz failed after a hard-fought 184 days, his memory has lived on amongst Bolivia’s revolutionaries ever since, most notably in the name of Felipe Quispe’s revolutionary Aymara separatist army in the 1980s, the Tupac Katari Guerrilla Army.

Revolutionary groups saw a rise in prominence during the 20th century as Bolivia fell under the intermittent control of nationalist dictators. People were faced with oppression, both mentally and physically, and so naturally they began to look towards revolution and rebellion for change. In the 1960s, Che Guevara arrived in Bolivia, bringing with him increasing clandestine action and guerrilla warfare.

Perhaps the most interesting and, in some ways, influential of these groups was the Workers’ Revolutionary Party (POR). POR was, and still is, a Trotskyist revolutionary group looking to overthrow the government in order to install a ‘dictatorship of the proletariat’. Its history is rich. In the 1930s and ’40s, POR attracted a huge amount of support from the miners and this lead to the historic creation of El Tesis de Pulacayo, in 1946, which promulgates the classical Trotskyite conception of permanent revolution.

My first experience of POR was meeting with members of the Revolution Union of Socialist Students (URUS), the student faction of POR, at their stall at San Andres Higher University (UMSA) to try and find out how active POR still was. What I found was a small but dedicated group of students all ideologically bound by a desire for a worker’s revolution.

Most of my hour or so at the stall was spent in conversation with a woman who called herself Natalia, though two other members, Toco and Ishkra, did occasionally chime in. These weren’t their real names. They felt that it was necessary for them to protect their identities, a throwback to the days of ddifference being that the superheroes actually needed theirs. Natalia claimed that POR’s members need the safeguard due to the extreme nature of their aims and actions, but from what I saw this just wasn’t the case. Quite frankly, they didn’t seem to be extreme enough to merit an oppressive response from Morales and his administration.

Natalia and I mostly discussed how POR was trying to effect change. She made it sound as though they were both very active and really quite extreme, with a focus on direct action and even, if necessary, the taking up of arms. But I had my doubts. We also discussed the reasons behind POR’s large drop in support over the last 20 years. POR still has support amongst government workers, due to the reduction in power of the unions, and, in fact, it has control of the teachers’ union. But amongst other sectors, POR’s numbers aren’t what they used to be. Toco and Ishkra, Natalia’s comrades, became involved in the conversation, and the general consensus was that since conditions for campesinos had been improving, they no longer felt any real need to take up arms and bring about a worker’s revolution. Essentially, they were saying that due to Morales’s great popularity, people no longer wanted any significant change.

The group also told me about their efforts to try and get people involved with POR and rebuild support. Their main tactics were organising marches, speeches or other events.
Later, I attended one of these events, which turned out to be not quite what I expected. I met Natalia outside the UMSA psychology department building at 9am on a Thursday to to observe her and her comrades address a class. Their normal practice was to get in and out before the teacher would arrived; however, on this occasion, things didn’t go quite to plan. URUS had posted some fliers that some considered slanderous, allegedly defaming a psychology professor by claiming she had been oppressing the students. The professor wasn’t pleased with this, and so decided to turn up early to her class and intervene. What transpired was a long argument-slash-debate about URUS’s methods. The students seemed, on the whole, to just want to get on with their class, but URUS stuck to their guns. In the end, they parted moderately amicably, mainly thanks to the cool head and restrained stance of Toco. After we left, an argument broke out amongst the members of URUS. They felt that Toco had been too moderate in turning the argument into a debate, even though he had just tried to direct the conversation onto political issues.

The next and final step in my journey with POR and URUS was the one I had been most excited about—the May Day march. I had been warned in advance that there would be a large turnout and that there was a good chance things might get hairy. But this did not end up happening. Once again, it was a case of POR talking a big game but not backing it up. As it turned out, only about 100 to 150 people from all parts of society turned up. They chanted with vigour, though not necessarily in unison, but were unwilling to push the boundaries. The most exciting thing that went down was everyone running round the admittedly-quite-intimidating police presence to get to the other side of the Prado. The police, however, simply followed suit and that was that.

Some speeches were given, but nothing more happened. None of the members seemed willing to test the police any further; hardly the actions of a hard-core revolutionary group. After about 20 minutes of just standing around feeling somewhat let down—not for the first time during my experiences with the party—I left.

Overall, my time with POR and URUS was surprising. I came into it expecting to find a group of hard-core revolutionaries, but ended up with the impression that, though their aims have remained as radical as ever, they lack the support to achieve them which, in turn, has lead to them losing much of their old vigour and revolutionary zeal. This also reflects the wider trend amongst Bolivian revolutionary groups: with the switch to democracy and especially the election of the very popular Morales, the clandestine and extreme nature of their methods has all but disappeared, leaving the state of the revolutionary, on the whole, weakened and ineffective.