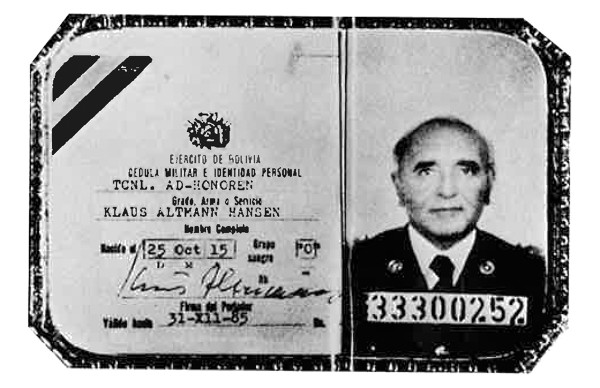 Klaus Barbie, a man who described himself as a ‘superman’ for being a member of the SS during the height of the Nazi occupation of France, was also described as a ‘savage’ by one of his torture victims. Lise Lesevre was tortured by Barbie for nine days, during which she was stripped, tied down, and almost drowned in a freezing bath, as well as being struck with a spiked ball that broke a vertebra in her back. She suffered from the injury right up until her death, nearly 50 years later. In a separate case, 44 children, aged between 5 and 17, seeking refuge in an orphanage in Izieu, in eastern France, were snatched by the Gestapo and sent to Auschwitz, where they all died in a gas chamber. The raid was carried out by Barbie personally.

How then did a man so barbaric come to lead a life of power and influence in Bolivia?

In 1947, Barbie was recruited by US intelligence for counterintelligence work to track down communists. With the aid of the United States, he fled prosecution in France and in 1950 came to Bolivia with his family and changed his name to Klaus Altmann. At this time, Bolivia was suffering from a string of unsuccessful leaders. The United States wanted to keep a ‘subtle’ control over many Latin American countries, and the CIA managed to do this in Bolivia via Barbie, as he held an important role in the country’s security services. Meanwhile, the French were continuing to search for Barbie, but the United States protected him, and itself, by denying his whereabouts. Additionally, Barbie was pocketing millions of dollars from an illegal arms enterprise and drugs business. In La Paz, he created a campaign and started a coup d'état to put Luis García Meza in control of Bolivia. Despite García Meza's regime lasting only 13 months, it has been described as one of Latin America's most errant violations of human rights, with up to 1,000 people being assassinated by the army-in which Barbie held the title of honorary Colonel. After the fall of the dictatorship, Barbie was left exposed and unprotected, and after it was discovered who he really was, he was expatriated to France to face trial for the crimes committed while he directed the Gestapo. Following Barbie’s initial expatriation from Bolivia, the United States offered a formal apology to France as it officially recognised its involvement with the ‘Butcher of Lyon’. In 1987, Barbie was arrested, tried, and sentenced to life imprisonment for 341 separate charges and four years later he died of leukaemia alone in prison.