Boat-Building in the Andes 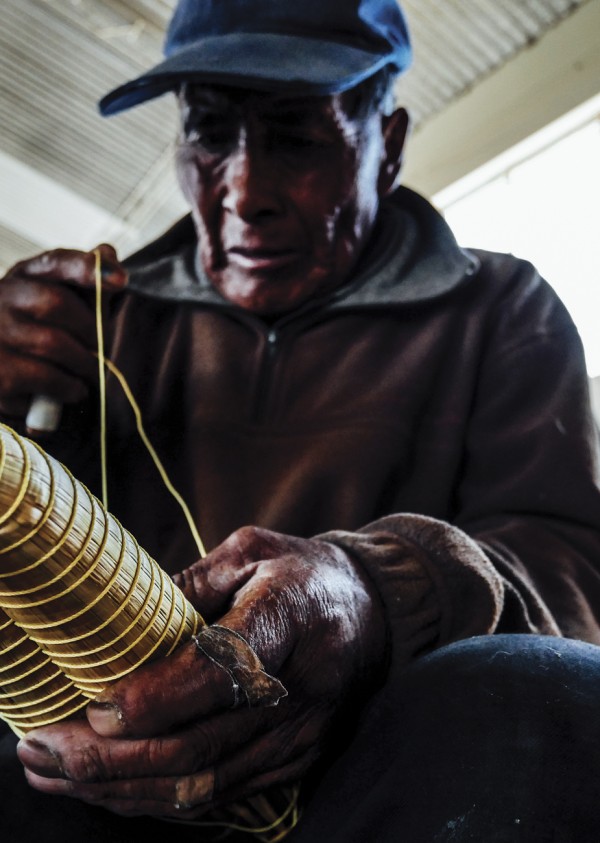 Bringing with me the skills of finger-knitting, hair-braiding, and a solitary workshop in willow-weaving, it is clear I was grossly unprepared for the difficulty of creating anything out of reeds. Upon my arrival to Huatajata, a small town of 300 people on the southeast shore of Lake Titicaca, I was welcomed by Máximo Catari and his family, basking in the early evening sunshine and chatting in Aymara. Huatajata has been known around the world for its expert boat-builders since 1969, and the Catari family, led by Máximo, has certainly contributed to this.

Máximo was meticulously cutting the bundle of totora in his hands, and miniature boats lay littered around him. While watching him precisely slice the reeds of his creation, I had the over confident thought of, ‘I could do that.’ I would soon be proven wrong.

It quickly became clear to me that no amount of hair-braiding could have prepared me for this: literally smashing reeds with a rather large rock. One could use the term ‘reed weaving’ in only the loosest sense, because when ‘weaving’ together a boat the reeds themselves are scarcely bent, only curved upwards to form the shape of the hull. Nevertheless much work goes into making even the smallest of structures, and I can only imagine the effort that goes into the full-scale boats Máximo has made.

The basics of boat-building without nails, wood or bolts involves binding three bundles of reeds together. The outer bundles each consist of a cuerpo – a handful of reeds tied together with each end cut to a point – surrounded by more reeds cut to tapering points which match that of the cuerpo. The smaller centre bundle, the chuyma, is wound spirally to the other bundles.

"I over confidently thought: ‘I could do that.’ I would soon be proven wrong."

I watched Máximo in horror as he cut the reeds, angling the handleless scalpel blade towards himself, the words of my mother to ‘never cut towards yourself’ flashing like neon lights in my brain. The plasters on his fingers and the large blood blister under his thumbnail served to remind me to be especially cautious. Yet the hardest part was still to come.

After I finished slicing the totora (and Máximo corrected it), it was time to tighten the thread that bound the reed bundles together. Using a small metal hook with a wooden handle (a specialized tool called a huakjala) to pull the string tight one loop at a time, it had to be even and straight. This proved to be difficult, and Máximo even admitted that it could be a tiring task, though easier with practice.

During my short experience it never did become easier. My mind numbed to the rhythm of hold, hook and pull, and I never found peace in the activity as Máximo seemed to. Nonetheless, pounding reeds with a foot-sized rock - making them strong when tightened and bending the hull into a recognisable boat shape - was satisfying.

As I finished my slightly uneven, imperfect reed boat - as stark a contrast to Máximo’s grand creations as a sardine is to a shark - I was satisfied nonetheless. There is something profound in holding in your hands the result of your work, lopsided though it may be. This is the joy I found in my experience of a traditional art: looking at my asymmetrical boat and thinking, ‘I made that!’