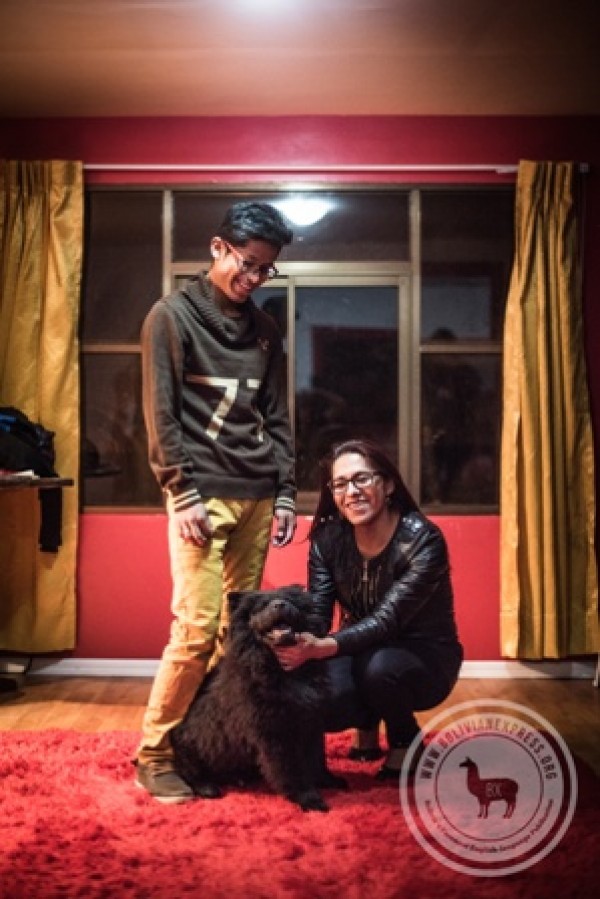 Luna Charlotte finds a love of her own

Luna Sharlotte Humerez exudes confidence, love, acceptance. She has mastered the art of conversation. She speaks openly and honestly, urging me to use my broken Spanish, laughing at my silly jokes. The home she shares with her husband, Henry, feels warm and pristine. The walls are a deep carmine, dotted with hand-painted white stars.

Luna tells me she loves interior design. The Disney film Wreck-it Ralph plays quietly in the corner of the bedroom as Henry and Luna speak about how they met. They sit comfortably on the bed together, absentmindedly holding hands. Her long, chestnut hair whips back and forth gently as she speaks. She keeps up a stream of sweet whisperings into Henry’s ear, reminding him over and over again just how much she loves him.

Growing up in El Alto in a world of brothers and kind neighbours, a father and a mother, Luna came out as gay to her family at the age of sixteen. At eighteen, she came out as transgender. Eight years later, in December 2016, Luna became the first trans woman to get married in Bolivia. On a crisp, mid-April morning in El Alto, and over steaming salteñas (Luna ordered hers spicy), we talked about the importance of family, how the personal is political, where religion fits into her identity, and her hopes for Bolivia’s future.

Millions of people worldwide identify as transgender (trans*, for short), meaning they don’t identify with the sex they were assigned at birth. The asterisk serves as a reminder that more than two genders exist, that not all transfolk are men or women, and that we ensure a space for binary-defying folk in the LGBTQ+ community.

Luna has been blessed with an exceptional support system. Henry loves her unconditionally, and their connection is magnetic. Her parents and brothers were immediately accepting when she came out as a transgender woman and have supported her fully ever since. Henry’s family acted similarly. ‘If my son is happy by your side, we will you support you in anything,’ she recalls them saying. Thanks to this support, Luna has been able to afford gender reassignment surgery and thus does not experience the constant displays of discrimination and bigotry that many of her trans siblings face daily.

Exact statistics about the transgender population across the world prove hard to come by, as a disproportionate percentage of the trans community is homeless or otherwise unrecognised by government-run institutions. In Bolivia, intense discrimination in the workforce has forced an overwhelming majority of trans Bolivians into sex work. ‘I have trans friends who were kicked out of their homes,’ Luna tells me. ‘They became sex workers to survive. To have food to eat and a roof over their heads.’

In May 2016, Bolivia passed the Ley de Identidad de Género, a law that lets people legally change their gender without undergoing hormone therapy or operations. It is the first of its kind to be passed in South America and will hopefully pave the way for more LGBTQ+ legislation in the rest of the continent, including Bolivia, where gay marriage is still illegal.

Although the law assures access to gender-specific healthcare, it does not contemplate the specific needs of transfolk once they come out or change their gender identities. Finding healthcare as a trans woman is especially grueling. ‘There are no medical specialists in trans women,’ Luna says. ‘There is no one here. They still see us like men.’

Despite recent legislative progress, on-the-ground support for the trans community in La Paz is virtually nonexistent. ‘As a trans activist here. . . you have to do everything yourself,’ Luna remarks. Non-profits working on LGBTQ+ rights focus primarily on preventing and treating HIV and on supporting the city’s gay population.

When asked what needs to change in Bolivia in order to create a safer climate for trans people, Luna insists that we must ‘socialise the law’. Historically, political shifts stem from changing attitudes within constituencies, not from the stuffy, removed annals of government. The first step to an equitable society is normalising trans identities and people. ‘We have to show that we are normal people,’ she tells me. ‘That we laugh and cry, just like everyone else.’

Like many citizens of this Catholic country, Luna feels a connection to God. ‘I believe in God,’ she says. ‘I don’t have any religion; I am not Christian nor Catholic, not Mormon, but I believe in God and I know God is in my heart. I know that he helped me in everything that happened to me last year,’ she says, referencing her recent marriage to Henry, La Ley de Identidad de Género, and being recognised for her fight for trans women and the trans community.

In the comfort of their El Alto home, Luna and Henry cuddle playfully with one another and their adorable black Shar Pei, Rulo. The bedroom light hits their faces softly as they joke around, peels of laughter filling the chilly evening air. It is clearly a scene of love, but it is also a scene of resistance.