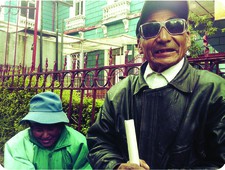 Social issues, Lifestyle and Going Out

"When the sun shines, he comes close to me and he can see the sparkle in my eyes', says Fernanda while embracing Franklin.

They are both gradually losing their sight and are almost completely blind. He is 28 years old, works as a civil servant at the Identifications Office. She is 23 years old and intends to study psychology. They met on a Thursday, April 19th 2012 to be precise. On the 22nd of the same month, they already had decided to be in a committed relationship. Since they started going out, Franklin would say jokingly: 'Marry me! Marry me!' One day, she mischievously replied with an unexpected 'yes'. This left her boyfriend silent. Shortly after he went to ask for her hand and they set about planning the wedding which was to take place on December 22nd, 2012, at the Maria Reina Church in Alto Sopocachi.

Everyone told him that Fernanda was pretty and that she had lovely eyes. She was told that Franco, as she affectionately calls him, had the handsome face of a doll. For this blind couple, physical attractiveness has been important in their relationship, in a similar way it is for the sighted, despite the fact that experts point out that among blind people, falling in love transcends physical attraction. ‘It’s amazing, in this institute people can’t see but they know everything’, says Franklin, telling me how he found out about the physical appearance of his then girlfriend and now wife.

‘It's fairly common to hear that blind people exchange information and rumours about the physical appearance of others. They care about this, even more than sighted people do’, explains Tito Peñarrieta, a blind singer. He adds that rumours on the beauty of those who are part of blindness support groups spread easily, and can be determining in whether couples stay together or not.

Psychologist Natalie Guillén explains that physical attraction always matters, even among the blind. The way one perceives oneself —clothes, tidiness, grooming— are elements that communicate your personality traits and have an impact in your daily life, not only in love.

‘Looking good goes beyond visual perception, it is a biologic, social and psychological aspect’, but superficial judgments also exist regarding physical expectations, even for the blind.

According to Carmiña Andrade, coordinator of the Louis Braille Rehabilitation Centre, many blind people opt to form relationships with visually impaired couples, or some other form of disability in order to feel they are understood and not looked down on. Subjects I interviewed tell me that the sighted often treat them disrespectfully, hiding them or making them feel worthless. For example, Fernanda said that she’s never had a sighted boyfriend fearing that he would get bored and not want to care for her.

A similar case is the story of the regional director of the Bolivian Institute for Blindness, Edwin Ilaya, who has been married for five years with Marlene, also visually impaired: ‘I was ashamed to be with girls who could see me bump, drop things, make mistakes'. Ultimately, what bothered him the most was the feeling of dependency; sighted people made him feel helpless and were constantly being attentive to him, which he did not like. Marlene genuinely cares: 'In my life, very few people have cared for me. She did not care about my blindness like other people'.

There are sighted persons like Edwin who can regain control of their lives, but not everybody can; the loss of sight can trigger a deep depression which comes out of the neglect and lack of affection they face, says Carmiña Andrade. ‘You should take into account that it is common for sighted persons to leave their partners when they become blind as in many cases they can't work anymore, become dependent and are no longer attractive to them’.

The case of a woman who recently lost her sight is another good example. She was the trophy wife of a military man 30 years older than her. When she became blind, he left her saying that he didn't love her anymore as she turned into an inconvenience, a nuisance. In another case treated at the Louis Braille Centre, a husband abandoned his wife and their eight children after she became blind. The woman had to abandon two of her children. Her sixteen-year-old daughter, already a mother, helps her sell instant soups at the El Alto market.

The pain caused by the abandonment might be appeased when finding a new partner —as is happens with sighted persons— but there is an important difference; the blind rely on physical attributes that they can't see, these they can only imagine. Andrade says that they look for a partner based on what they perceive of the other: the voice, demeanour, charisma, etc. Franklin supports this idea by referring to Fernanda saying 'I love how bubbly she is, the way she talks, how she treats me. If she were pretty and pedantic, I would have told her no...'

In the process of falling in love, other attributes are valued, explains Dr. Bismarck Pinto, Doctor in Psychology and Health. Beyond physical appearance, for blind couples there is a need to feel, to touch the other, draw with the hands on the other's face. In blindness, the strength of the partner is valued over and above sympathy and pity, which are rejected.

Before Fernanda, Franklin had a relationship with a sighted person. He remembers, with discomfort, that when they argued in the street, she would leave him alone in places he wasn't familiar with. She would then feel sorry and come to him, but he systematically rejected the support and went where he had to go alone to show her his strength. With Fernanda, the situation is very different: ‘She wouldn't leave me somewhere, we would both just stand there. If she goes, she would get lost... of course, that’s not in her interest’, he says mockingly.

However, Franklin believes that there is something essential that separates love between the blind and the sighted: the pain of losing their sight. 'We have both moved forward, we wouldn’t argue and fight over small things as the sighted often do. We’ve been through worse, these things won’t get in the way of us being together. This unites blind couples more strongly’. He adds: 'plus, we value physical contact more highly because when you hug the one you love, you feel like you've known that person all your life.'

In the end, there is a common reality among sighted and blind persons when it comes to love, explains Dr. Pinto: 'Don't fall in love with anyone, you fall for the person that you like and that makes you feel good'. He points out that love is a construction between two people who, by deciding on common goals, form a bond for life. It's a process of discovery, encounters, missed connections and farewells. He adds, ‘a person in love is blind, even if he can see. The one in love is stupid, irrational, crazy’.