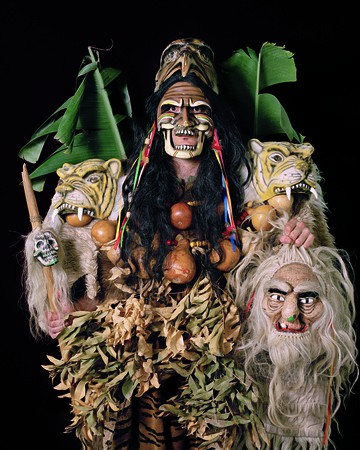 This is my country, he thought. Spend two hours on a plane and the outside world shifts from cement towers and alpaca sweaters to motorcycles circling a square and acai berry–stained teeth.
The landscape below the plane came alive. Illimani’s snowy peak had transformed and descended into a land of greenery. From the sky, Nacho noted the Beni River thriving between the trees in the Amazonian jungle. Just before landing, houses emerged around the airport forming Riberalta. That morning, Nacho left the bustling streets of a cold, pot-like city. Now, he found himself landing in a small town two hours away that measured fifteen blocks across.

He stepped off the plane and basked under the sun. His shoulders eased back into the thick Amazonian air. A small drop of sweat slid down the back of his neck and his stomach began to grumble. Apart from the dried fruits on the plane, Nacho had not eaten anything on the flight from La Paz to Riberalta. His mind momentarily wondered to the world of sweet juices he entered.

‘Bienvenido a Riberalta.’ That’s what the pilot had said over the muffled speakers. Now the flight attendant smiled at him in her tight baby-blue skirt, men in orange jackets waved at him as they guided him to the cement-covered awning some meters away, and children screamed it at him as they ran towards their loved ones.

Under the crowded awning, his La Paz jeans and button-up began to feel heavy. He reminded himself that this is what he wanted: To escape the ache in his bones from the cold. He smoothed back his sweaty hair. The ice cream man blew his horn, and Nacho began to walk through the chattering families, looking for the baggage claim in the small covered area.

Soon, the humidity moistened his torso and arms, making them stick together. As he rolled up his flannel sleeves, he swatted a mosquito on his arm. People had warned him of the malaria and yellow fever in the jungle. A mother and her teenage daughter watched him swat the small insects and smiled at him as though reassuring him of his safety. Bienvenido a Riberalta, the mother and daughter said, with their smile.

Everything felt hot: The sun, the air, the warmth between families. It was as though the heat itself had melted the community together and energized the world into a land of plants bursting through the pavement and people laughing between the welcome hugs.

Nacho continued to search for his luggage through the heat. Eventually, a policeman pointed him towards a fenced-off area. Confused, he advanced. A lady in heels and a pink silk shirt was the airport’s baggage claim.

Bienvenido a Riberalta, she said as she chit-chatted and handed each person their luggage in exchange for a purple airport ticket. Nacho thanked the woman and began his search for a taxi outside.

The sun shone over the grassy fields that surrounded the airport. An assembly line of motorcycle taxi drivers called out to the paceño. Without thinking, Nacho handed off his backpack to a middle-aged moto-taxi driver. The man plopped the bag in front of him and attempted to balance the bike as Nacho fumbled his way on. On his left, Nacho noted a grinning Cristiano Ronaldo holding up a cup of Herbal Life on a billboard. He smiled up at his self-proclaimed twin, who welcomed him to the Amazon. Bienvenido a Riberalta.

The motor revved and wind began to cool the sweat in Nacho’s hair. The motorcycle eased forward on the dirt-smoothed roads and past lines of houses. Fruit trees peeked out from backyards and beckoned Nacho to try the fruit. Bienvenido a Riberalta. He breathed the humid air, sat up straight and smiled at the passing girls on motorcycles.

After dropping his backpack off at his hotel, Nacho walked a block towards downtown Riberalta. Four large busts, a toucan-shaped payphone, benches and teenagers in uniforms marked the perimetre of the plaza. Nacho thought back to his time in high school walking around the squares in La Paz with his friends. None of the teenagers here wore sweaters like he always wore over his uniform in La Paz, but they all mirrored the same flirtatious pokes he gave girls and the crowd he formed with friends around benches.

Across the street from the plaza, on every side, stood small restaurants and ice cream shops. Nacho slapped another fly away from his face and eventually made his way to the nearest restaurant: Açai Mania.

While waiting for his açai smoothie, Nacho looked out at the square. From his spot on the corner, he counted the number of times the same trio of teenagers rode their motorcycles around the square. Like in a carousel, the three rode side by side, singing along to music from an iPhone and chatting as they rode in circles.

No one honked or cut each other off. People of all ages circled the centre of their city over and over. Old couples sat in comfort as they made their rounds. Small children snuggled between their parents and reached out to imaginary beings floating in the Amazonian wind.

The waitress appeared with the drink and Nacho stirred the unfamiliar beverage as he watched people circle the plaza. He took a sip of the purple smoothie and thought, this is my country. Spend two hours on a plane and the outside world shifts from cement towers and alpaca sweaters to motorcycles circling a square and açai berry–stained teeth.

He hummed the tune of La Paz… Lindas montañas te vieron nacer… He sipped the Amazonian fruit drink… El Illimani tu cuna meció… He watched the three boys ride next to each other… Y la kantuta su alma te dio… And eased into his warm chair on that hot day by the plaza… Kollita tenias que ser.
Bienvenido a Riberalta, he thought. Tomorrow, he will begin to explore the other side of his country.