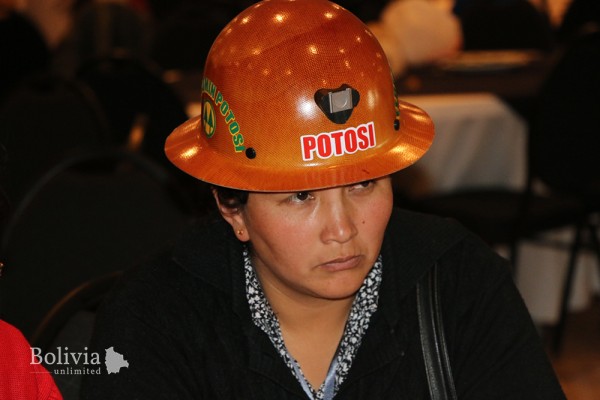 With women holding 53.1% of the seats in parliament as of 2017, Bolivia ranks second in the world in female representation in government. In 2010, a series of electoral laws were passed that require an even gender split at the national level. In 2014, Bolivia became the second country to achieve a female majority in government after Rwanda in 2008, according to the World Bank.

But despite the quantity of women in positions of power, rates of domestic violence and femicide in Bolivia remain high. According to a study by the Pan-American Health Organisation, 53.3% of Bolivian women between the ages of 15 and 49 experienced domestic violence in 2003. Fifteen years later, while there has been progress in the cause of equal rights for women, the situation of domestic violence is still critical.

Female politicians in Bolivia face all kinds of challenges, including harassment, threats and exclusion.

‘The patriarchal system has reacted against women’s advancement,’ said Mónica Novillo, Executive Director of La Coordinadora de la Mujer, an organisation that fights for women’s participation in politics and women’s empowerment. ‘We’re seeing that domestic violence has increased not only in number of cases, but also in level of cruelty. Due to the rising phenomenon of dating violence, we’re also seeing that the age at which women begin to suffer domestic violence is younger.’

‘We consider women’s participation in politics to be very important,’ said Graciela Vásquez, a representative of Centro de Apoyo a la Mujer y a la Niñez, which is based in Cochabamba. ‘But this participation is not precisely a qualitative participation,’ she explained, pointing out that even in positions of power, women’s opinions often hold less weight than those of their male counterparts.

‘It’s a great jump to have achieved 50% women in various spaces of power,’ said Elizabeth Salguero, former Minister of Cultures of Bolivia, who is now Advisory Coordinator of UN Women Bolivia. ‘That is already a change – and it’s a process,’ she said.

For some, however, the fact that women occupy more than half of parliamentary positions doesn’t mean much. ‘We consider the quota between men and women in parliament to be nothing more than symbolic,’ said Mayra Rojas of Mujeres Creando, an anarcha-feminist group that assists survivors of domestic violence, but was not in attendance at the 4 July event. ‘Political contributions made at the state level do not meet the requirements or needs of women in Bolivia, and society continues to be sexist,’ Rojas added. ‘You can agitate, you can have the best ideas, the best actions, but you can’t force them to walk in someone else’s shoes.’

Others are more optimistic about the advancements that women in Bolivia have made, whilst recognising the ground that still needs to be covered. ‘I think it’s very valuable that women are occupying more and more spaces,’ Salguero said, ‘but we have no female governor and only 8% of mayors are women, so there are still spaces in which we need more women.’

Since women occupying positions of power in Bolivia is still a fairly new concept, female politicians face all kinds of challenges, including harassment, threats and exclusion. In 2012, the Law against the Harassment and Political Violence against Women was passed in response to the assassination of councilwoman Juana Quispe. ‘Obviously, if there weren’t women in positions of power, a law never would’ve been passed,’ Salguero said. ‘But there are more subtle forms of harassment, such as not letting women talk and excluding women from meetings,’ that still occur.

According to Novillo from La Coordinadora de la Mujer, ‘The laws are not sufficient for all that needs to be transformed so that women can fully exercise their political rights in confidence, without fear for their lives, their political careers, or their families.’

The solutions to these issues are not clear cut. As Celina Taveras, who is a representative of Mujeres en Acción from the department of Tarija, points out, these matters affect rural and urban women differently. While the challenges for rural women in politics include high rates of illiteracy and low levels of education, urban women are more likely to face political violence or harassment.

‘Violence against women is so naturalised and normalised that women end up feeling blamed for it,’ said Vanessa Rojas, also of Mujeres Creando. ‘Violence is not recognised as a structural problem. Sometimes women don’t recognise the pain they are experiencing; it gets worse and worse and they have to face it day by day.’

‘We consider the quota between men and women in parliament to be nothing more than symbolic.’

Despite the challenges that remain for women’s advancements, recognising diversity, encouraging women to enter politics and continuing the progress that has been made in the past few years is of utmost importance. With more involvement and agitation for their voices to be heard, women in Bolivia can reshape what it means to hold 53.1% of positions in parliament: converting that number from a statistic to a force for change.