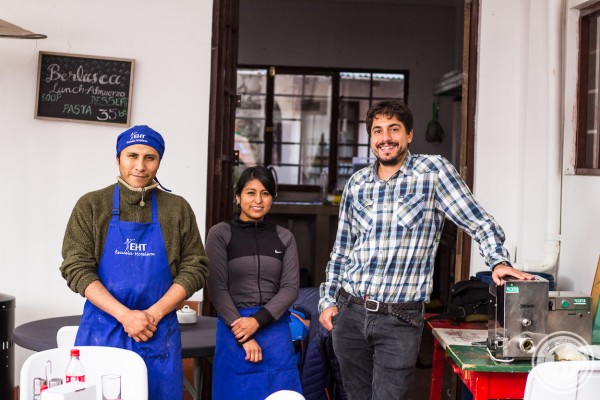 An Italian corner in the centre of La Paz

Hidden away in the confusing and chaotic streets between Calle Sagarnaga and Calle Santa Cruz, there is a chance to take a peaceful break from the touristic noise of the city centre and the exhausting tradings in nearby markets. In a large and bright colonial patio behind San Francisco Church, lies Berlusca, a restaurant opened by the Swiss-born, half-Italian, half-Bolivian chef, Emiliano Rojas. The roots of its creator are reflected in the restaurant’s kitchen: Swiss precision, Italian quality, and Bolivian warmth.

Chef Emiliano was initiated into the culinary arts almost by accident. In 2014, his parents were renting a venue to a local restaurant in La Paz’s Zona Sur. When their tenants were unable to pay rent, Emiliano, fresh from studying political science in Switzerland, had an idea. At the age of 27, he bought a pasta machine and decided to open his own restaurant. His vision was to offer Italian cuisine combined with typical Latin American traditions. Thus, Fenomeno was born, Emiliano’s first restaurant, where you can taste lasagnas alongside local asado.

Berlusca is Emiliano’s latest endeavour. Opened in November of last year, it boasts a perfectly harmonious rural setting, with wooden tables surrounded by plants, and an open view kitchen. The restaurant’s namesake is the nickname of the former Italian Prime Minister, Silvio Berlusconi. But, for Emiliano, it means something more personal: Berlusca was the name of his small skewed-eyed dog, whose passing away inspired him to name the restaurant. ‘According to my mother,’ he says, ‘Berlusca means skewed-eyed, and it’s a kind of joke because Berlusconi was in power and things weren’t going the right way in Italy.’

There seem to be few choices in Berlusca’s concise and delicious menu, but there are three kinds of homemade pasta: tagliatelle, fusilli, and rigatoni, all of them available with carbonara, bolognese, pesto, or mushroom sauce (which is Emiliano’s favourite). When ordering, follow Emiliano’s lead, as he perfectly knows which kind of pasta pairs well with each ingredient.  Vladi, who is one of Emiliano’s collaborators, makes fresh pasta daily, using the original pasta machine with which the chef began his career. He begins at 11:30 am, producing an average of four kilograms of pasta per day. Other than wine and beer to accompany your meal, you can also choose from a menu of fruit juices made from seasonal fruits that have an impeccable taste.

Before pastas, don’t forget to eat the sopa del día (the soup of the day), a light vegetable soup, a vegan dish naturally, that sweetly caresses your taste buds before the main course. In fact, regarding the vegan world, Emiliano intends to create a new, completely vegan menu, including ‘spaghetti di zucchini al pomodoro’. After the main course, you can order a simple dessert. A fried plátano accompanied by ice cream or crema de maracuyá makes for a great finish to a perfect lunch.

Berlusca was the name of his small skewed-eyed dog, whose passing away inspired Emiliano to name the restaurant.

Emiliano would define his kitchen as ‘honest’ – honesty based on uniquely fresh flavours and a decent quantity served. ‘When I go to other restaurants,’ he says, ‘I cannot stand to see the unsatisfied look on a customer’s face because of the amount.’ Well, I cannot disagree. If you are in the centre of La Paz and have had your fill of Bolivian street food, in Berlusca you can find a peaceful and also cheap place to chill out and taste excellent (and abundant) artisanal pasta.