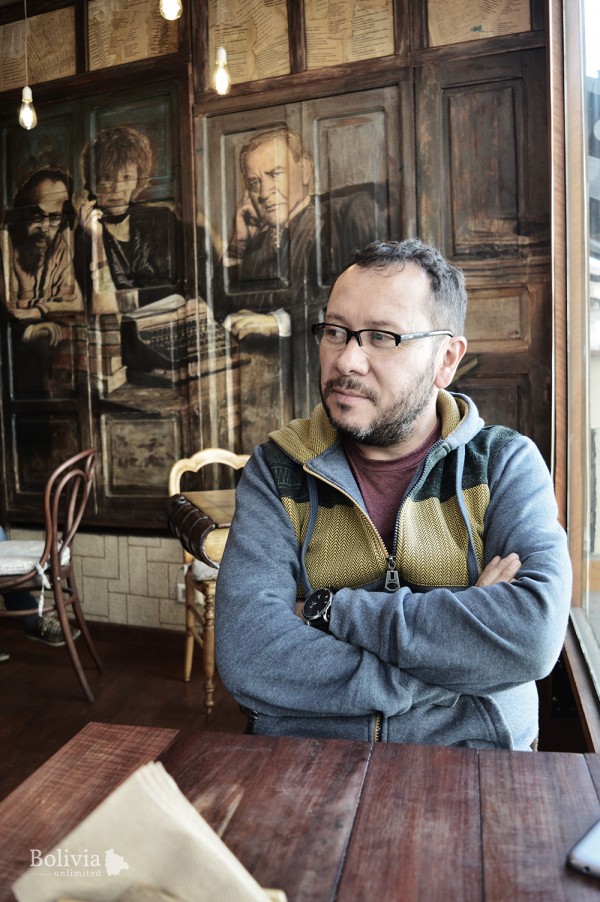 An unlimited vision for Bolivian poetry

Born in Santa Cruz and raised in Oruro, a student in Cochabamba, and a resident of La Paz, Benjamin Chávez is a poet with an intimate knowledge of Bolivia, and of the country’s creative spaces. He is not only a successful poet, who received the Premio Nacional de Poesía for his collection Pequeña librería de viejo (2007), but he is also an artist committed to finding poetic talent in Bolivia and presenting it to those outside of his country. In 2010, Chávez founded the International Poetry Festival of Bolivia, primarily to showcase local poets, but also to present talent from across the Hispanic world. Chávez’s vision for his poetry looks inside and beyond the country’s borders; a celebration of poetry from within that is simultaneously becoming more accessible to those outside.

Chávez’s poetry, though technically Bolivian, is not tied to his nationality. For Chávez ‘there is no difference between those who write poetry here [in Bolivia], or in another Spanish-speaking Latin American country. Someone who reads a lot of poetry might recognise if a poet is Chilean, Argentinian or Bolivian…but they could also get it wrong,’ he says. This blending of Latin American poetry has only been accelerated by the growing ease of publication. As Chávez notes, ‘thanks to new digital technology and digital impressions, costs of printing are lower and there is an increasing number of small, independent publishing companies and cultural initiatives that decide to publish poetry.’ Years ago, Chávez recalls, it was harder to publish in La Paz, as only a few large publishing companies existed. ‘Costs were higher,’ he explains, ‘printing wasn’t digital.’ Though poetry has ‘always had a space here in La Paz’, only recently has it gained easier access to the world outside.

‘What I saw was an unlimited world, contrasted with the limits inside of myself.’ Benjamín Chávez

Chávez’s poetry is fascinated by ideas of space and movement not only in what the poem contains, but, more enticingly, in what the poem may have left out. He asks his reader not only to consider the page, but to imagine what may lie outside of it. Chávez describes his fifth book, Extramuros (2004), as ‘an exploration of the frontier of languages, the frontier close to silence.’ His poems are ‘an experiment in stripping yourself of words, to see what you can say with one word, or with silence.’ In contrast with Extramuros, his fourth collection, called Y allá en lo alto un pedazo de cielo (2003), is composed of a single poem of 40 pages. ‘These are two extremes of language, one that tries to say nothing and the other that tries to say everything,’ he explains. According to Chávez, ‘between these two spaces is everything.’

Extramuros consists of three sections – ‘entreacto’, ‘inaudible’ and ‘fragmentaria’ – that are themselves made up of several shorter poems, or fragments. Chávez’s exploration of poetry and physical space is best expressed in the sixth poem of ‘entreacto’, made up of six words and simply titled ‘6’:

yo quien me limito

I who limit myself]

On the page, ‘6’ is visually empty. The type that makes up the body of the poem is surrounded by a sea of white space that threatens to break up what is contained in the text. But the poem holds its own and breaks the very boundaries of the page. ‘It is trying to say that there is a relation between the outside world and the inside world, that one has within oneself,’ Chávez says. ‘If at some point you realise that the universe is infinite, you tend to find a limit inside of yourself. The opposite can also happen. You can also feel unlimited on the inside and limited on the outside; limits in what you can say, what you can see… In this case , in this moment, what I saw was an unlimited world, contrasted with the limits inside of myself,’ he adds.

For Chávez, Bolivian poetry has the potential to be limitless, to reach outside of the page, outside of the country itself, and perhaps even beyond the Spanish-speaking world. Parts of Chávez’s works have been translated into English, German and Estonian, and his work has been featured in various anthologies published in countries across Europe and the Americas. Chávez also notes the success of Bolivian poets such as Jaime Sáenz, whose work has been translated into English and German as well.

‘Little by little, local poets are getting more and more popular outside of Bolivia.’ —Benjamín Chávez

Part of the growth of Bolivian poetry is due to an increased number of poetry festivals and prizes in the country. Poetry ‘is very alive, especially in the cities,’ Chávez says. ‘There is always something to read, and sometimes there are surprises. Little by little, local poets are getting more and more popular outside of Bolivia. They participate in literary festivals and are published outside of the country.’ Chávez’s poetry does not follow a conscious path. For him, ‘there hasn’t been a plan’ in his work. ‘I try to respect classical forms of verse, but I also play with white spaces and calligrams… My most extreme experiments have been in Extramuros and Y allá en lo alto un pedazo de cielo.’

It seems the future of Bolivian poetry will increasingly challenge the boundary between the ‘inside’ and the ‘outside.’ ‘The writers have to keep writing,’ Chávez suggests, ‘there’s no other way around it.’ According to him, the problem is one of space, ‘Maybe what needs to happen is the creation of more spaces to discuss and debate what is being written. The literary prizes also help attract attention, even if momentary, and to centre it.’ poetry is ‘not difficult or hermeneutic,’ he says, ‘you just have to give it an opportunity.’